Sweden, Denmark and Norway have been voted the happiest countries in the world...

The Scandinavians seem to be offering some interesting models:
The Swedes don’t feel the cold like we do in Britain - Telegraph
Copenhagen aims to be world's first carbon neutral capital : Renew Economy
Futures Forum: District heating systems run on waste... from Scandanavia
Futures Forum: Norway's price structuring for energy bills... no standing charges and higher price-bands for higher use
Futures Forum: Plans for Port Royal: a winter garden design from Sweden

The Scandinavians are the 'happiest' in the world:

Sept 9th 2013: As heads of state get ready for the United Nations General Assembly in two weeks, the second World Happiness Report further strengthens the case that well-being should be a critical component of how the world measures its economic and social development.
Sustainable Development Solutions Network | World Happiness Report 2013

As are their children, together with the Dutch:

Today, Radio 4 started serialising a - rather more wry - look at the Scandinavians, from a Brit living amongst them: 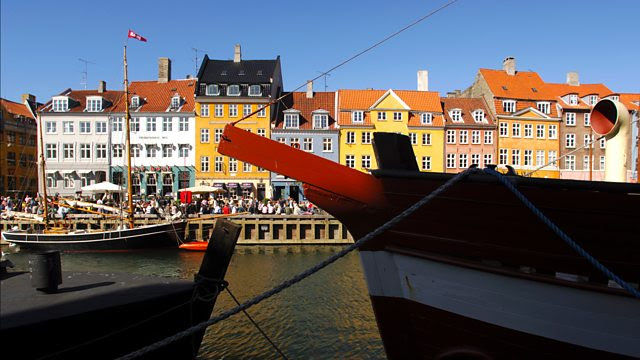 
Denmark, the Happiest Country in the World

The Almost Nearly Perfect People: The Truth about the Nordic Miracle
Episode 1 of 5

In the year that sees a major new exhibition on Vikings at the British Museum our fascination with all things Scandinavian shows no sign of abating.
Journalist, Michael Booth's timely new book sees the author embark on a revealing and humorous journey through all five of the Nordic countries to discover the secrets of their success.
Across the week, five post-cards from each of the countries which challenge the often rose-tinted view of this part of the world offered up by the Western media. Along the way, a more nuanced, often darker picture emerges of the region - it isn't always easy being Nordic.
First up the Danes - consistently rated as the happiest people on earth and yet they pay the highest taxes

BBC Radio 4 - Book of the Week, The Almost Nearly Perfect People: The Truth about the Nordic Miracle, Denmark, the Happiest Country in the World

And  yesterday on Channel Four:

Sweden, Denmark and Norway have been voted the happiest countries in the world.
Hugh Fearnley-Whittingstall is off to find out why.

Hugh lands in Denmark, which the United Nations has declared the 'happiest country in the world'. In Copenhagen, he cooks with Rene Redzepi, owner and head chef at Noma, voted the best restaurant in the world for three years in a row and pioneer of new Nordic cuisine.
Hugh meets Bjarke Ingels, one of the brightest names in international architecture and Søren Malling, star of The Killing and Borgen.
He practises his high diving in a swimming pool in the city centre harbour, surrounded by Denmark's beautiful people, and discovers how everything travels by bike in Copenhagen, even the booming Danish sperm bank industry
Leaving Copenhagen, Hugh visits an Efterskole, a boarding school where the teenagers spend a year being taught how to be better citizens.
Arriving on the idyllic island of Samsø, Hugh climbs a wind turbine and meets up with chef Kasper Gaard, and together they cook up a feast.

More on the carbon-neutral Danish town of Samso from Forbes magazine:

Sønderborg, Denmark – Denmark boasts forward-thinking top-down and bottom-up energy policies. At the national level, a political consensus unimaginable in the United States yielded, this March, an energy plan that commits the country to ditch fossil fuels by 2050.
At the local level, as in the United States, some of the most aggressive initiatives to cut carbon have been launched by cities. The clean energy transition under way on the island of Samsø, the subject of a 2008 feature byThe New Yorker’s Elizabeth Kolbert, is the case study best known outside of Denmark. But there are many other examples. The island of Ærø, for instance, is home to the world’s largest solar heating plants.
On a recent reporting trip to Denmark organized by the State of Green consortium, I visited another, Project Zero, which is based in Sønderborg, a municipality of 77,000 located near the border with Germany.
The comprehensive plan being implemented in Sønderborg follows what can be thought of as the Danish model: energy efficiency coupled with a complementary mix of clean electricity and fuels harvested from local resources.