Following the first full session on Wednesday
Futures Forum: Public Examination of the New East Devon Local Plan ..... ..... HOUSING
the Herald headlined the additions developers would like to see in the Local Plan when it comes to housing numbers: 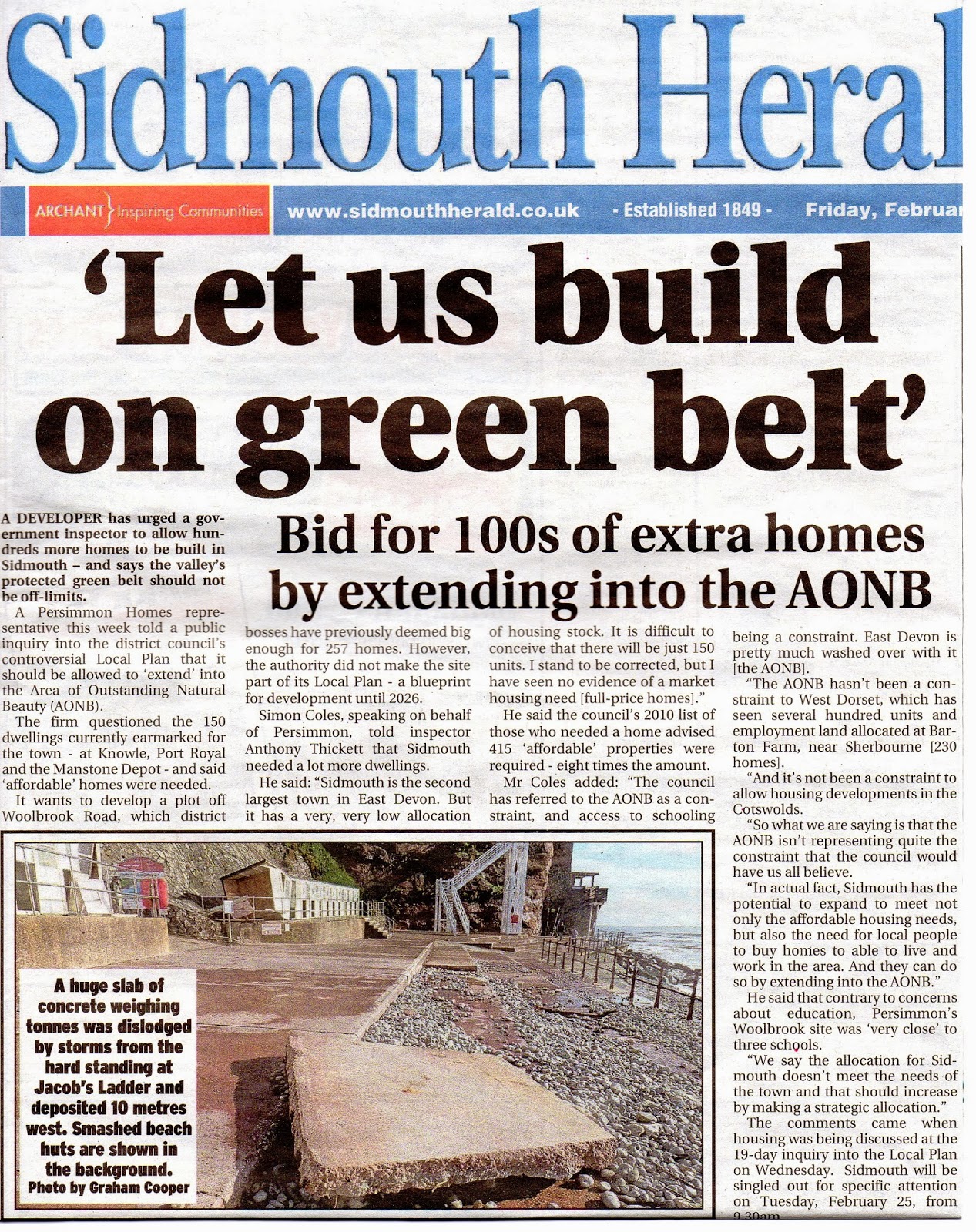 Independent Councillor Susie Bond highlighted the interest of developers at the session:

Examination in Public of the Local Plan, Housing session

The purpose of the meeting was to decide whether EDDC have established the correct number of houses for the district to the period to 2026, whether the length of the plan is now sufficient at only 12 years (assuming the plan is adopted this year) and whether EDDC’s policy of 50% of new development at the West End, 40% growth across the rest of East Devon and 10% in the villages is correct.
Developers were vociferous throughout, but it was notable that:
Which begs the question how any of the developers’ views could be taken as remotely impartial.
Examination in Public of the Local Plan, Housing session | Susie Bond
Signs of collapse at Wainhomes | Susie Bond

The Express & Echo interviewed Dr Margaret Hall of the CPRE, who highlighted the miscount of population predictions:

THE East Devon branch of the Campaign to Protect Rural England has reasserted its concerns at the amount of development planned across the district following the start of a Government inspector’s review of a highly controversial planning document.

Over the last few years during which the plan has evolved, campaigners have criticised the recommendation of 15,000 homes as well as the amount of employment land planned during the time period. They have also accused the council of a “lack of transparency” of the process.

But Dr Margaret Hall, secretary for the East Devon branch of the campaign group has calculated that only 11,000 – 12,000 houses are needed to meet the demand for housing.

After day three of the inquiry, Dr Hall said she had been “impressed” with how objective the inspector had been but still had some major concerns about the amount of houses and employment land planned.

Dr Hall reiterated previous assertions that the council’s housing prediction numbers are based on incorrect population predictions as per the 2008 Office of National Statistics and Department of Communities and Local Government. The annual population growth, according to the boards, from 2008-2026 was one per cent, when according to the 2011 census the rate was less than 0.5 per cent. “If you look at census figures, there are not as many people living in East Devon as predicted,” she added.

Dr Hall also said she firmly believed the demand for affordable housing across the district could adequately be met within their reduced figure. Currently, the Local Plan’s Spatial Strategy recommends that 50 per cent of the housing provision is allocated to the west of the district near Exeter including Cranbrook, with 40 per cent around existing towns and 10 per cent around the villages. Dr Hall said she was concerned that some developers were “pushing” for this ratio to change, with more houses to be allocated around towns and villages. “It seems that their using this argument to justify approval of their own bigger schemes,” she added.

Dr Hall was basically questioning the quality of the data presented in the draft Local Plan:

Twenty-year report needed, for housing projections to be sound.

That was the expert advice given by Dr Margaret Hall of CPRE and others, at Wednesday’s hearing on HOUSING in East Devon’s new Local Plan.

The Inspector was advised that in-migration to the area would increase, but was likely to be at lower levels than in the past.

During the proceedings, it was stressed that official housing projections should be regarded as a starting point for assessing the area’s needs.

Twenty-year report needed, for housing projections to be sound. | Save Our Sidmouth
.
.
.
Posted by Jeremy Woodward at 11:32