An Exeter Pound and the Woergl: 'complementary' and 'interest-free' currencies

This week, Transition Exeter will be showing a film which makes clear that it is commercial banks which 'create' our money:
Futures Forum: An Exeter Pound: "97% Owned": Positive Money campaign film: showing Tues 7th October

Or, to put it another way:

Most importantly, we have to end this situation of money that’s private, but which pretends to be public, namely the fractional reserve system. I am always reminded of the movie “When Harry met Sally”, where Harry says the worst kind of woman is one who is “high-maintenance, but thinks she’s low-maintenance.” THAT’S OUR MONEY SYSTEM.

The German MonNetA research organisation has considered the modern applications of these ideas:


The Growth Misconception is that “Money based on interest can grow forever’...
Cancer, for instance, follows an exponential growth pattern, and, using this analogy, interest may be seen as the cancer on our social and economic system.

The Transparency Misconception can be summarized as: ‘Interest is paid only when we borrow money'...
On the average we pay about 40% interest in all the prices of our goods and services. In medieval times people paid ‘the tenth’ of their income or produce to the feudal landlord.

The Fairness Misconception holds that: ‘Everybody is treated equally in this money system’…
80% of the population pay almost twice as much as they receive.
... between 1950 and 1995, Monetary Assets (backed by an equivalent amount of debt) increased 461 times, the Gross National Product increased 141 times and the Net Income in Wages and Salaries (after tax) rose only 18 times, and it actually declined after 1980 to the level of the seventies.

Between 1932 and 1933 the small Austrian town of Woergl started one of the first model experiments - based on the book of Silvio Gesell “the Natural Economic order”.

You are here: Home
Seach in:
„The money system was made by men. It depends on us to change it in order to serve all people.“
Michael Ende

What are Complementary Currencies?

There are many ways to exchange goods and services, other than the widely used currencies such as Dollars, Euros or Yen.
Complementary currencies are agreements among community members to accept other means of exchange than the official scrip.
These new exchange systems do not substitute the traditional currencies, but they complement them.
They offer a diverse range of possibilities designed to promote social, cultural or ecological goals for example by using regional currencies, working-hour-accounts (like time-dollars) or Barter-Systems.

This is from their study on 'Money for Sustainable Development': 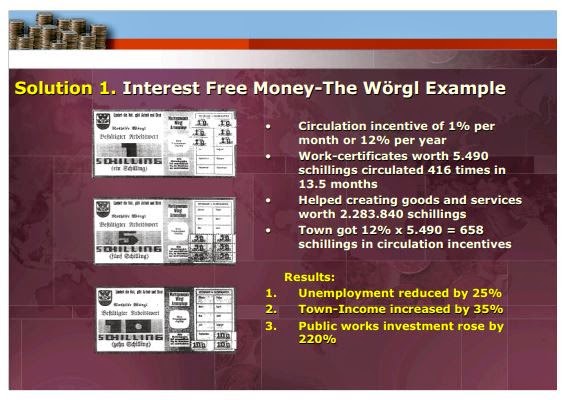 Between 1932 and 1933 the small Austrian town of Woergl started one of the first model experiments - based on the book of Silvio Gesell “the Natural Economic order” (1916).

Backed by an equivalent amount of ordinary schillings in the bank the town spent 5,490 ‘Work Certificates’ into circulation.

At a time when most countries in Europe had a decreasing number of jobs, Woergl reduced its unemployment rate by 25% within a year. Income from local taxes rose 35% and investment in public works 220%.

The fee collected by the town government which caused the money to change hands so quickly amounted to 12% of 5,490 Schillings or a total of 658 Schillings. This small amount was used for public purposes and thus no single individual gained from it, but the community as whole.

When, however, 130 communities in Austria began to be interested in adopting this model the Austrian National Bank saw its own monopoly in danger and prohibited the printing of any local currency.

A TED Talk summarises the 'experiment' - and how we can see the phenomenon of 'money':

The point, then, is that 'value' is all about 'exchange' - which itself is about 'circulating' and not 'hoarding' money:
the Power of Demurrage: the Wörgl Phenomenon | Real Currencies

Here's a positive overview of the Woergl experiment:
The Woergl Currency and Demurrage | Reinventing Money

And one of complementary currencies in general:
Do "local currencies" really help the communities that use them?

To finish, however, a piece from Forbes from a couple of weeks ago:

As of this summer, you can be broke in Santa Barbara, California, and still afford organic produce from the farmers’ market. You can be dollar-broke, that is—but if you have enough Santa Barbara Missions tokens jangling in your pocket, earned in exchange for helping out at a number of local nonprofits, you’ll be set.

SB Missions, a new local currency in Santa Barbara, began circulating in July, soon after California Gov. Jerry Brown signed a law repealing a section of the state’s corporation code that prohibited the issuance of currencies other than the dollar. Though SB Missions would have launched in July with or without that excision from the state constitution, the currency’s founder, Ben Werner, says the nod from regulators helps put the whole Missions economy at ease—which is likely to be, as in any economy, a boon for growth. And the same is likely to be true for California’s dozens of other active community currency systems.

Also in July, New York released its proposed framework for regulating virtual currencies, and the potential rules’ implications for Bitcoin have since been widely discussed. But the new regulations would also affect local digital currency systems like Ithacash, in Ithaca, New York. Critics of New York’s proposed rules complain that their scope is too broad, and that they lump small alternative currency systems together with much larger ones, introducing regulatory hurdles for all currency systems that many will never be able to surmount. But Scott Morris, who founded Ithacash and last week briefed the New York State Attorney General’s office on how he hopes the money system can work, says he senses “a degree of openness” among regulators, and believes “they understand there’s plenty they don’t understand” about the many uses and instantiations of alternative currencies.

The converging interest in complementary currencies is thanks in large part to the problems wrought by the recession and growing income inequality. An increasing number of communities face the exact challenge alternative currencies are designed to address: a shortage of dollars and a dwindling number of ways to earn them, mixed with no diminishment in peoples’ practical skills within a community, or the number of hours in a day. Local currencies can offer a way to expand the assignment of economic value, so that activities like volunteering in a local garden, giving a neighbor a haircut, or reading to a homebound senior can help a person earn access to food and other basic needs, even if dollars never change hands.

Historically, too, local currency systems have cropped up in periods when economies falter. During the U.S.’s Great Depression in the 1930s, several hundred municipalities and other groups across the country issued local currencies to keep the gears of regional economies turning. In the midst of its own depression, in 1932, the small town of Wörgl, Austria, leaned on a local currency issued by its mayor to climb out of a deep unemployment ditch. In response to more recent economic turmoil in Greece, a complementary money system called Local Alternative Units (“tems” in Greek) has emerged .

Today, conditions are such that alternative currencies could be poised to proliferate, says Chris Tittle, director of organizational resilience at the Sustainable Economies Law Center, an Oakland-based nonprofit. He’s noting sprouting signs of a “new generation of currencies,” he says, which leverage technology and online networking.

Still wondering how a local money system is all that different from the one we’re used to, or how it can offer relief to the economically disadvantaged? Consider these points from alt-currency proponents about their structural distinctions:

When alternative currencies are zero-interest, there’s no built-in imperative for growth.

“In our financial system, money comes into existence in the form of debt. The problem is that when you borrow money, banks create the principle, but not the interest you need to pay it back, so not everyone will be able to pay up in full. There’s just not enough money around. Foreclosure and bankruptcy are certainties.

“You need more people to borrow more money next year so that the extra money that is created can pay off all the debt from the previous year. You need to run ever faster to stay in the same place. That’s why everyone talks about GDP growth—that’s the growth imperative. It makes us destroy our natural resources, overfish the oceans, mine every last mountaintop, and act in other self-destructive ways, because if we don’t do these things, foreclosures will go through the roof. Bay Bucks is a zero-interest currency, so growth is not an imperative.”

They allow communities to make decisions about where capital should flow, rather than giving sole decision-making power to banks.

“If we look at our national monetary system, over 95% of money in circulation is issued by private, for-profit banks as debt. The vast majority enters the economy through the housing and financial centers; that is, not into productive sectors, like manufacturing and food production—the things that are actually meeting people’s daily needs.

“Local currency systems empower communities to decide where money should be circulating themselves. It’s empowering a different group of stakeholders to have a say in their own economic future.

“In California, there’s been a 60% drop in small-business lending since 2007. That’s particularly impacting African-Americans, women, Latinos—small-business owners from historically marginalized societies. So small loans are drying up, and in the absence of access to those traditional forms of capital, communities are just deciding to create their own ways of capitalizing and enabling exchange for small businesses.”

“I think it’s important to draw a distinction between [local currencies] and crypto-currencies like Bitcoin, which are based on pseudo-anonymity. The types of currencies we support are the exact opposite: They’re based on human relationships—building community and encouraging people to interact with one another.”