Knowle relocation project: Councillors "in the dark, as no-one within the EDDC hierarchy was telling them anything."

The whole issue of 'transparency' and the District Council's relocation project will not go away...

This comment from today's SOS blog asks why our own Councillors are left so much in the dark - and why there is so little information on the relocation project in the public domain:

SOS supporters may recall that at a public Q & A session at Stowford Community Centre, a couple of years ago, our Sidmouth District Councillors collectively stated that they relied upon the Sidmouth Herald for information about relocation. They would otherwise be in the dark, as no-one within the EDDC hierarchy was telling them anything.

Here is an example of information on the relocation project from the Herald in March 2012 - which no doubt would have been news to both Councillors and members of the public:
District council could ‘leave Sidmouth in two years’ - News - Sidmouth Herald

Meanwhile, there does not seem to be much critical analysis of information by Councillors and Committees...

And it does indeed seem that the Scrutiny Cttee was not willing to challenge the notion that most of the information on the relocation project should remain 'confidential':
Futures Forum: Knowle relocation project: "Merely noting a report has no place on Scrutiny."

Here is further comment in the letters pages of the latest edition of the Herald, as relayed by the EDA blog:

This letter from Tony Green of the East Devon Alliance, was published in today’s Sidmouth Herald, with the title, ‘Frightening stuff’ : As the nights draw in 18.10.14

Here is the text to save people from downloading the word document:

AS the nights draw in, EDDC’s office relocation plan is turning out to be scarier that the Blair Witch Project!

Moving from the Knowle could cost up to £20 million according to some independent estimates. The budget for just planning the move has already spiralled to more than £700,000 – well over £1 million counting officer time.

All this when vital services are being slashed, and the Government is hinting that District Councils are likely to disappear within a decade.

Leader Paul Diviani’s Cabinet- a small coterie of councillors without a single Sidmouth representative – refuses to reveal the financial details, hiding behind a cloak of “commercial confidentiality”. They are even squandering thousands on legal costs to fight an order by the Information Commissioner to publish consultants’ reports.

In situations like this, the Council’s Overview and Scrutiny Committee under Cllr Tim Wood has a legal duty to act as a vigilant watchdog to hold leaders to account on behalf of the public.

They had a golden opportunity on October 16th when Deputy Chief Executive Richard Cohen, who heads the Relocation Team, updated them on its progress.

His report was long on generalities and jargon but desperately short on financial facts and figures.

Enough was disclosed, however, to confirm fears about the viability of what critics have dubbed a ‘vanity project’. Millions of pounds might have to be borrowed to fund it; the relocation might not be to Skypark, after all, due to problems selling council assets in Honiton; marketing the Knowle could take longer than thought; necessary planning permissions could be problematic.

But, despite the uncertainties, Mr Cohen declared that the Cabinet had decreed that the Full Council would be asked for its final approval of the project when it meets on December 17th.

Independent councillors Claire Wright and Roger Giles, supported by Tory Cllr Graham Troman, urged the committee to recommend a pause to the move until the full financial facts were known.

Sadly, a Tory majority of the Committee, including Sidmouth councillor Frances Newth didn’t see the urgency, and voted limply to do nothing but “note” the Report.

So, as Halloween approaches, the looming spectre of the shambolic Relocation Project stumbles on in the dark towards a possible financial abyss.

And the public’s watchdog is exposed as an EDDC lapdog!

Here is a report on the same meeting from the Herald: 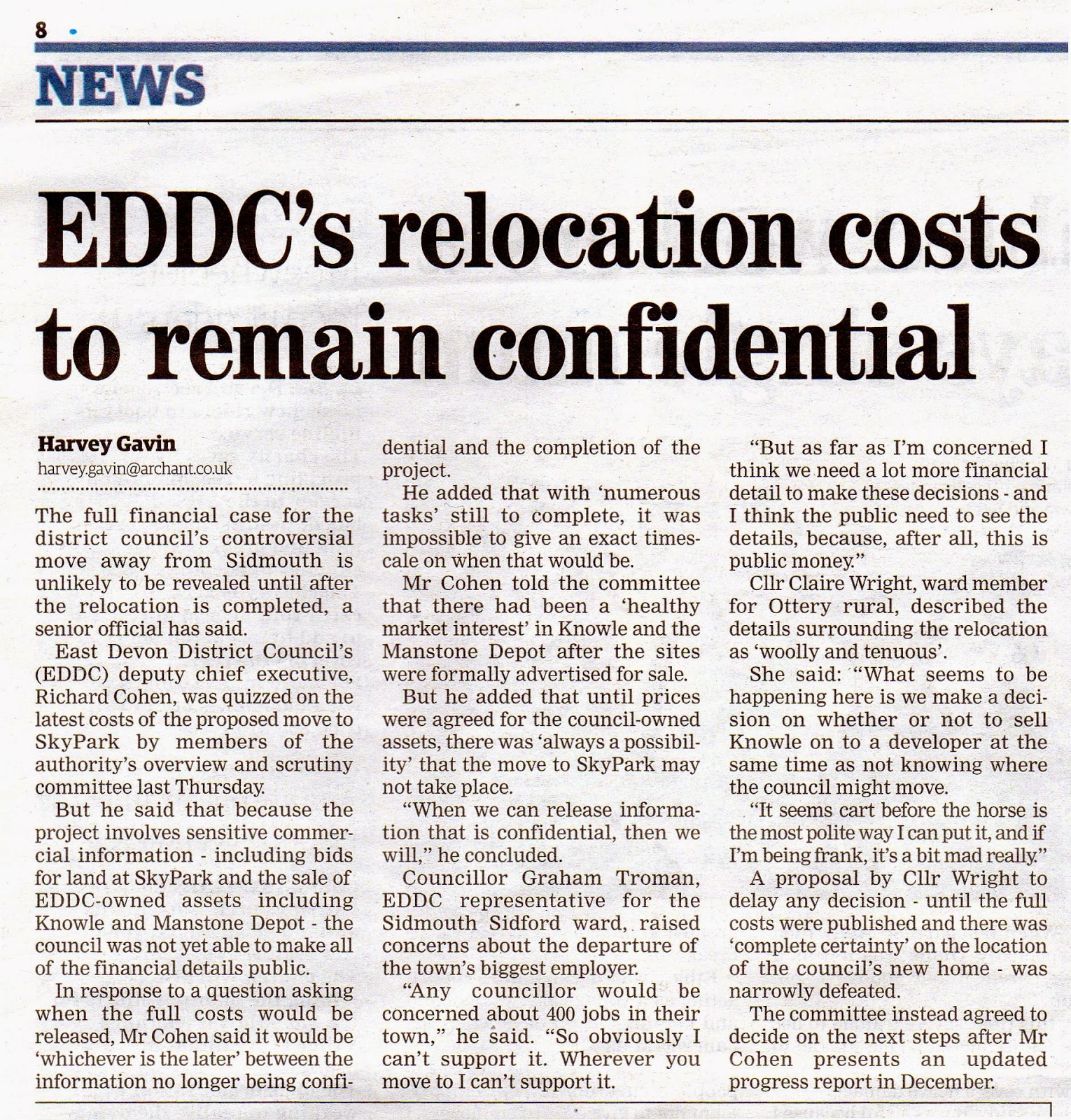 This situation is not unique to East Devon:
Council vanity projects | East Devon Alliance
Futures Forum: 106 payments and the NPPF.......... “The definition of ‘sustainable’ has nothing to do with green issues or energy at all......... It means one thing: commercially viable.”
.
.
.
Posted by Jeremy Woodward at 11:25

Thanks for sharing information on relocation..
Movers and Packers in hyderabad