Back in February, the County Council showed the cycling public what could be done between Sidford and Sidbury - and asked for feedback and suggestions:
Futures Forum: Sidford to Sidbury walking / cycling trail >> exhibitions >> Weds 19th and Thurs 20th February
Plans revealed for walking and cycling trail between Sidbury and Sidford | Exeter Express and Echo
The Pub In The Village : Cycle & Walking Pathways Proposals Linking Sidbury to Sidford & Sidmouth Revealed

Now, the County Council has now published the results of its February consultation - and is mapping out where to take the project: 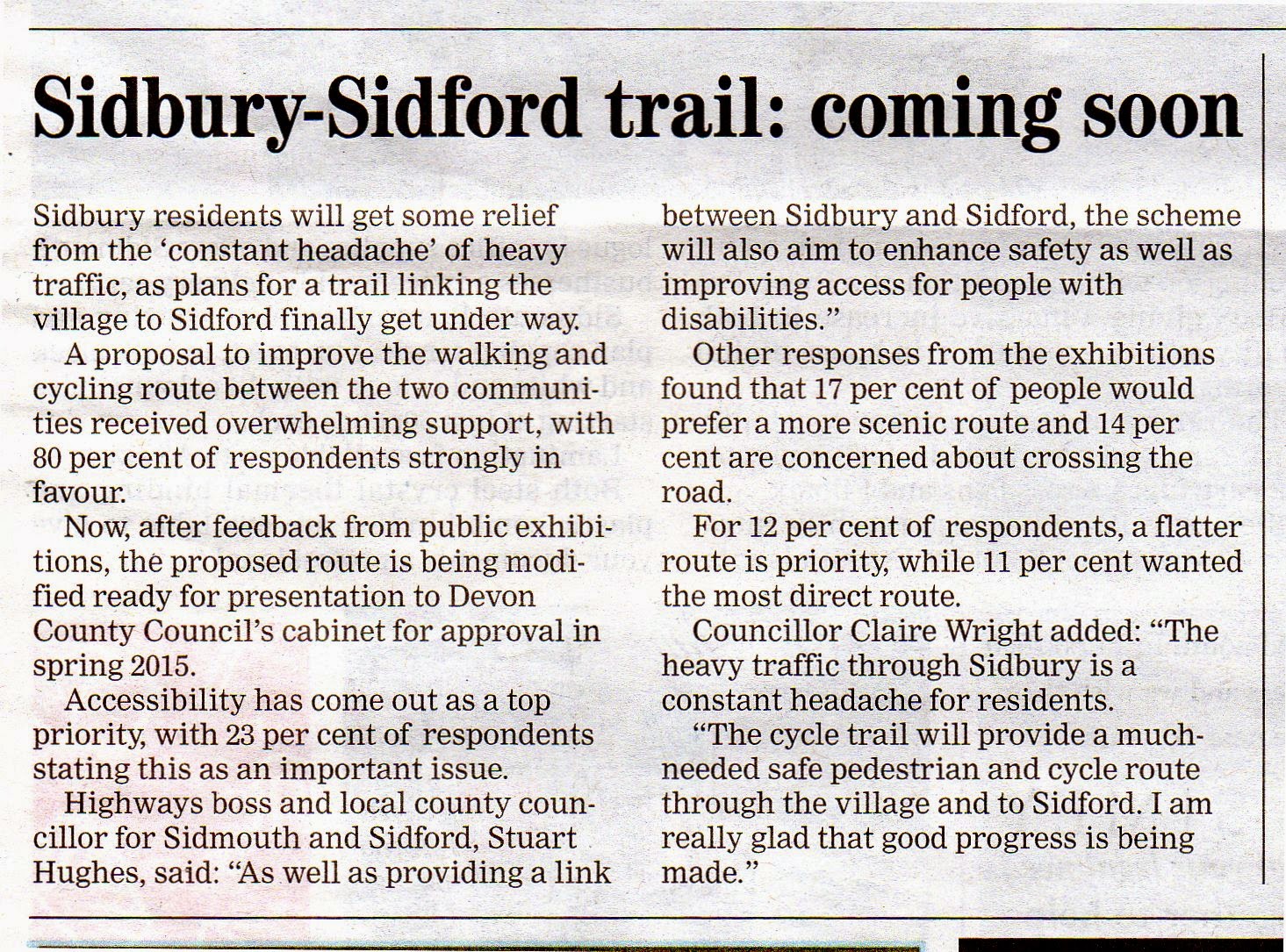 Cycle and footpath road markings
Work is progressing on developing the route of the proposed walking and cycling trail between Sidbury and Sidford.
Following the response from the public exhibitions for the proposals, the results have shown that there was overwhelming support for an improved pedestrian/cycleway facility linking the two communities – with approximately 80% of those who responded “strongly supporting” the scheme.
There were varying levels of support for the routes presented at the exhibitions. The largest number of responses, regarding the choice of route, revealed 23% felt the route needs to be easily accessible.
As a result, the route is being re-examined and further work is underway on some variations of its alignment to see if accessibility can be improved.
Additional engineering and ecological survey work will be needed and it is anticipated that this will take place within the next few months.
Councillor Stuart Hughes, Devon County Council Cabinet Member for Highway Management and local County Councillor for Sidmouth and Sidford, said: “The exhibition has provided us with some useful feedback which is informing ongoing work on the proposals. Local people have made it clear that accessibility is important for this project and that’s what we want to deliver. We are making initial approaches to landowners regarding the availability of land for the trail with the aim of designing a preferred route. As well as providing a link between Sidbury and Sidford, the scheme will also aim to enhance safety as well as improving access for people with disabilities.”
Councillor Claire Wright, local County Councillor for Ottery St Mary Rural, said: “The heavy traffic through Sidbury is a constant headache for residents. The cycle trail will provide a much-needed safe pedestrian and cycle route through the village and to Sidford. I am really glad that good progress is being made.”
Other responses from the public exhibitions also found that 17% would prefer a more scenic route, 14% were concerned about crossing the road, 12% preferred a flatter route, while 11% wanted the most direct route.
When a “preferred route” has been developed, through negotiations with landowners, it will be presented to Devon County Council’s Cabinet for approval in Spring 2015.
Delivery of the trail is still anticipated to be carried out in two stages with the southern section, from Sidford to the southern boundary of Sidbury, being scheduled first.