Sustainable development always seems to be about 'poor people':
Futures Forum: UN Sustainable Development Summit: “We’re in a giant car heading towards a brick wall and everyone’s arguing over where they’re going to sit”

It depends of course what you mean by 'poor people':
Futures Forum: Measuring poverty

Two years ago, Oxfam had a suggestion just before the Davos summit:
The cost of inequality: how wealth and incomeextremes hurt us all: Oxfam International

Only yesterday, following on from the UN summit on sustainability, the point was raised once again:


At the beginning of this year’s annual United Nations General Assembly, world leaders set out to end extreme poverty in 15 years. This is not the first time the UN set such an ambitious goal for itself. In 1990, it committed to achieving 15 development programs that would end extreme poverty by 2015. While there has been much progress, extreme poverty is all but gone.


Perhaps the issue is that extreme poverty isn’t the real problem.


Swedish electronic music duo The Knife has an interesting new proposal: what if, instead of ending extreme poverty, the UN concentrated on ending extreme wealth?


A comic released with the duo’s last album, “Shaking the Habitual,” imagines this reality in satire. Created by Malmö-based Swedish comic artist Liv Strömquist, the comic is a perfect mockery of the development jargon.


If just a small portion of the wealth from the über-rich were more equally distributed it would have benefit everything from the environment to housing to gender equality. As one of the “experts” in the comic says, “you can do much with small means,” for instance housing “25 to 35 people” in just one of the many mansions an extreme wealthy person owns.

Strömquist, whose work focuses on feminist graphic novels and satirical comics, told Quartz that she was contacted by the musicians to create a comic for their album. “End Extreme Wealth,” she said, originated from the theme some of the album and from a conversation she had with the musicians about wealth concentration.


“It was clearly to make a political statement,” Strömquist told Quartz.


And it did. After the comic was exhibited at the Göteborg International Biennial for Contemporary Art, the author was contacted by some representatives of the Spanish party Podemos, who wanted to hand the comic out at rallies.


While the campaign might be a little too revolutionary to be adopted anytime soon, the marketing plan is ready. Strömquist has even thought about an End Extreme Wealth concert—because what world-changing campaign doesn’t have a big concert, perhaps in Central Park?

And from this week's Guardian:

Poverty goals? No, it’s extreme wealth we should be targeting 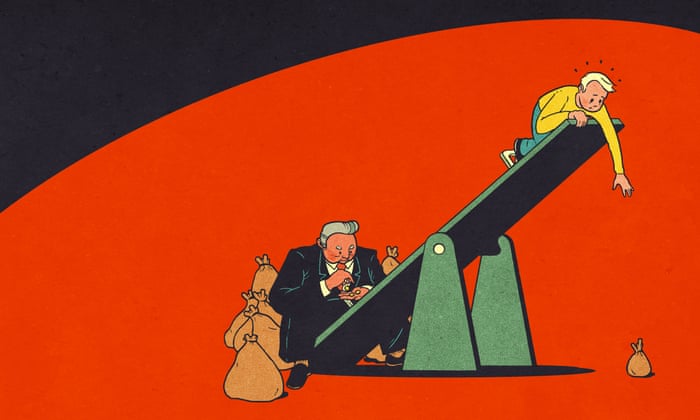 1,418
Save for later
The sustainable development goals – 17 in all, starting with “end poverty, in all its forms, everywhere” – were officially adopted at the UN in New York last month. Celebrities approved immediately, experiencing the goals as a kind of moral brand-building exercise, choosing their favourite and inviting fans to favourite it too.
The pope was a little more reserved, issuing the thought-provoking, slightly wordy critique: “We must avoid every temptation to fall into a declarationist nominalism which would assuage our consciences.” But the mood overall was triumphant – the millennium development goals had worked, repaying the ambition of the international community last time around, so why not think even bigger?

A global agenda that will shape the world’s approach to ending global poverty and hunger by 2030 has been formally adopted by world leaders in New York
Read more
If the pope and a few rogue academics expressed unease, it took a whimsical Swedish electro band to get to the root of the problem. The Knife produced a graphic novella announcing a new millennium goal: end extreme wealth. “As we all know,” says a UN official with a forbidding fringe, “extreme wealth is a huge problem in this world.”
“Sometimes I felt overwhelmed with hopelessness,” adds a UN researcher. “Many of these people live in a very limited environment … their lives are restricted by old traditions and cultural ideas about how to live. For example, Ben, a 45-year-old, very wealthy man: his life revolves around very trivial things. He collects antiques similar to how the squirrel collects nuts.”
Here, rushing towards your face like the ground after a pratfall, is everything that’s wrong with sustainable development goals – the reason their hopeful language sounds so tinny and unconvincing, the reason dyed-in-the-wool atheists find themselves siding with the pope, even when he isn’t entirely explicit about his objections.
The international community, having first established that it speaks for everyone (The Future We Want was the title of the foundational document from Rio – as though challenge or dissent, if it came, would be from those opposed to modernity), proceeded to look through the wrong end of the telescope. It is impossible to fixate on an income problem – whether a low income or a high one – without finding implicit fault in the people who are on that income.
Furthermore, as Martin Kirk from the activist network the Rules pointed out, all the language of sustainable goals frames poverty as a disease: eradicable, no match for the ingenuity of mankind, but fundamentally nobody’s fault. It is a landscape where everyone’s a hero and nobody’s a villain; one in which unfair trade agreements, land grabs, structural debt relations, privatisation of publicly owned utilities and tax evasion never happened.
Poverty is not a naturally occurring germ or virus; it is anthropogenically created though wealth extraction. Any goal that fails to recognise this is not only unlikely to succeed, but can only be understood as a deliberate act of diversion, drawing attention away from what might work; in its place, the anodyne, fairytale language of hope, in a post-ideological world where all politicians just want what’s best and a billionaire is just a benefactor you haven’t met yet.
Joe Brewer, also for the Rules, undertook an analysis of the language of growth in the sustainable goals. GDP, perpetually growing by no obvious means beyond enthusiasm, is the principle, indeed the only driver of poverty eradication – as well it might be, once it has obliquely been established that you’re not going to do anything about wealth extraction, either by governments or by corporations.
Corporations don’t feature at all in the report, even while many have more wealth and greater reach than governments and indeed an ever more important“partnership” role in the UN. The glaring contradiction is between relying on endless growth to end poverty while at the same time taking “urgent action to combat climate change” (goal 13), and vowing to “protect, restore and promote sustainable use of terrestrial ecosystems” (goal 15).
The incompatibility was pointed out in trenchant and unarguable language by the economist David Woodward, one of the UN’s own senior advisers. And yet Incrementum ad Absurdum (as Woodward’s paper was called) does indeed appear to be the plan: grow your way out of poverty while simultaneously shrinking your way to sustainability.
These basic assumptions – poverty is the problem, growth is the answer, climate change can be tackled separately to consumption, and corporate behaviour is neither here nor there – extend far beyond the UN, into political cultures everywhere.
One is constantly told, on the progressive side, that social democracy has had its day because people generally have become meaner; attitudes to poverty have hardened, and generosity has withered, the man on the street is actually very judgmental about people who can’t support themselves or their families. But how would attitudes look if we had spent the past 30 years asking questions about the rich: their characters, their honesty, their industriousness, their contribution to society? If the problem facing the British economy had been identified as the destabilising effects of extreme wealth, how long would it have been before the wealthy themselves came to be scrutinised?
“He and his family,” the Knife’s researcher continues, of the High Net Worth Individual Ben, “are caught in a vicious circle of wanting more and more crap. They have very little or no concept of what democracy is.”
Asking questions about the rich has been portrayed since the dawn of wealth as envy; asking questions about the poor is considered practical and sympathetic, moral and problem-solving. But no problem can be solved while political institutions won’t recognise that poverty has a cause.

Poverty goals? No, it’s extreme wealth we should be targeting | Zoe Williams | Comment is free | The Guardian
.
.
.
Posted by Jeremy Woodward at 15:35