Plans for Port Royal: anticipating a Regeneration Board >>> "a clear appetite from the town council to regenerate the eastern end of town"

This is the story from today's Herald:

Residents could soon have a chance to put forward views on how they would like to see Sidmouth’s eastern town redeveloped.
Sidmouth Town Council will today consider launching a ‘scoping exercise’ to gather feedback on what people would like to see built at and around Port Royal.  The study, run by East Devon District Council (EDDC) and the town council, would look at what a potential project for the eastern town could involve - and how such a scheme should be planned and implemented.
But Councillor Cathy Gardner, an EDDC member for the Sidmouth Town ward, has voiced concern that any such consultation would be ‘premature’ - and suggested waiting until the fate of a Neighbourhood Plan is determined.
The town council will decide in December whether to draw up a Neighbourhood Plan for the whole Sid Valley. If it goes ahead, the community-led document will involve consultation on things like where new homes and shops should be built. It would also ask for views on what should happen in the eastern town.
Cllr Gardner said: “My fear is that [the scoping exercise] has the potential to shortcut or even derail the prospect of doing a Neighbourhood Plan. The big benefit of asking [about the eastern town] as part of a Neighbourhood Plan is the solid methodology - it is the best way to get feedback from members of the public. Why would you rush [doing the scoping exercise] when you can do a really good quality consultation as part of a Neighbourhood Plan? It seems a bit premature.”
Cllr Gardner also warned that by asking residents the same questions in two separate consultations, there was a danger of ‘consultation fatigue’ and receiving less responses.
But EDDC says it thinks Sidmouth residents will welcome having their views represented in any plans for the town. A council spokeswoman said: “We appreciate that Sidmouth Town Council is also considering a Neighbourhood Plan and it seems to us that the town council’s desire to move forward with one should not preclude the other - otherwise there is a danger that good ideas are delayed or blighted by an overly controlled approach.
“A Neighbourhood Plan is a possible future opportunity that should not inhibit what seems to be a clear appetite from the town council to regenerate the eastern end of town. Cllr Gardner has raised the question of consultation fatigue, which is an issue worth recognising and one that we and the town council will of course seek to avoid. As a Neighbourhood Plan takes at least two years to be put in place, it would be a shame to use that as a reason not to do anything else in the meantime.”
Sidmouth could launch seafront regeneration ‘scoping’ exercise - News - Sidmouth Herald

With the same story as it appears in the Herald, courtesy of District Cllr Cathy Gardner's blog: 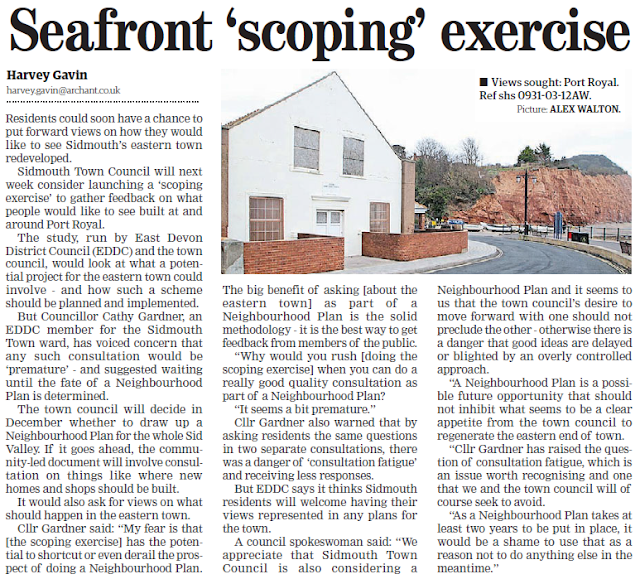