There has been a lot of discussion generated by the District Council's proposals for the Mill St car park in the centre of Sidmouth:
‘War’ cry over future of eastern town - News - Sidmouth Herald
Streetlife | Mill Street Car Park
Mill Street Archives « East Devon Alliance

Much of the controversy is about the perceived lack of due process:
Futures Forum: Plans for Port Royal: anticipatimg a Regeneration Board
Futures Forum: The District Council, developing Mill Street in Sidmouth ... and transparency

The issue, as far as the District Council is concerned, is that Sidmouth needs affordable housing:
Futures Forum: A solution to our housing problems: build on car parks

However, the Chamber of Commerce is worried about the loss of car parking in the centre of town:
Futures Forum: Sidmouth parking issues: decreasing capacity at Ham Lane

Interstingly, no Sidmouth Councillors are quoted in the District Council's press release:

East Devon District Council is to commence a feasibility study into the possibility of transforming its currently underutilised Mill Street car park into much needed accommodation for local families in Sidmouth.

Despite a perceived lack of parking in Sidmouth, Mill Street car park, which has capacity for a total of 46 cars (available on three year reserved parking leases), has not proved a popular choice with either local residents or business users.

Council officers are disappointed that to date – despite a proactive marketing and advertising campaign carried out during the summer -only 25 of the spaces have found customers willing to pay the annual fee of £1,500 plus vat (and business rates for business users) in return for their exclusive use.

In view of this current lack of viability, the council is actively considering alternative uses for the site, which is ideally placed to access Sidmouth’s popular town centre amenities. Investing in social housing provision is a potentially interesting proposition, particularly as the site is opposite the Holmdale housing development - a highly successful affordable homes scheme, which recently provided 12 families with much needed new affordable homes in Sidmouth.

Councillor Paul Diviani, Leader of East Devon District Council, said: “We will have access to substantial Section 106 funding, so it would seem an ideal opportunity to invest this money in further social housing provision in Sidmouth town itself. We will presently be talking to our partners and looking into the feasibility of a new social housing scheme on this site. However, it is still our intention to continue to offer sufficient reserved car parking spaces at both Holmdale (which has 12 vacant spaces) and Mill Street  to meet the needs of our existing customers.
“A full analysis of the viability of Mill Street as a housing development will of course be carried out, with further reports going to Cabinet and consultation with interested parties will take place if the housing scheme that is being considered proceeds to planning application. If the housing scheme isn’t feasible, other options will be presented to councillors.”

Councillor Iain Chubb, Portfolio holder for the environment at East Devon, said: “While we are exploring the feasibility of a housing development, we are very aware that 33 unoccupied car parking spaces in Sidmouth town centre is not to anyone’s benefit.  We are therefore considering creating 33 temporary parking spaces to be made available to the public on a pay and display tariff in partnership with a private sector provider. This joint venture arrangement with a preferred partner would  utilise automatic number plate recognition camera technology to manage the use of these spaces.”

Councillor Jill Elson, Portfolio holder for sustainable housing and communities at East Devon, said: “Sidmouth is in acute need of more affordable housing for local families. The regeneration of this car park would help towards meeting this need. This is an opportunity that cannot be overlooked, particularly as we will have sufficient funding from 106 contributions with which to execute the works.”

And in today's Herald, the arguments turned rather heated: 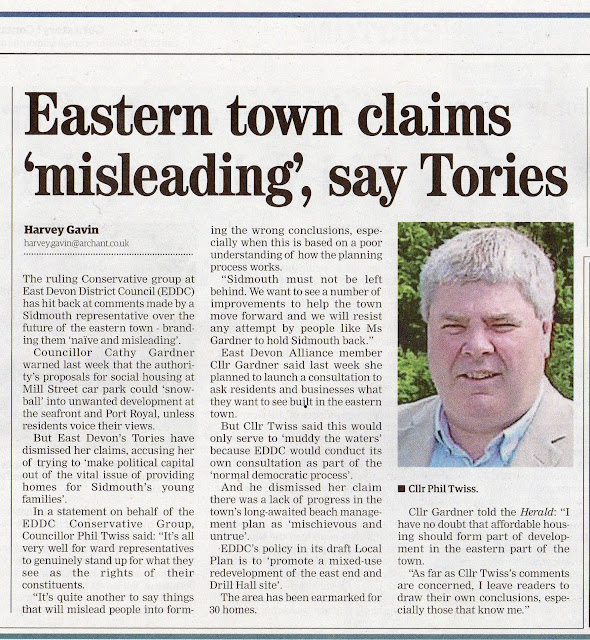 There have been some very pertinent comments on the EDW blog from several corners of the District:

9 OCT 2015
The most extraordinary rant has appeared in the Sidmouth Herald under the authorship of (“I am not and never have been the Whip for the East Devon Conservative Party”) Councillor Phil Twiss, which is reproduced in its entirety below (with comments added).  It puts us in mind of the early days of the sterling work of Councillor Claire Wright, when she was also attacked for attempting to change the much-derided status quo.
I have  quoted the full press release provided by a local newspaper, not the shorter version in the Sidmouth Herald
WE WANT SIDMOUTH TO MOVE FORWARD, NOT BE HELD BACK’
... ...

EDDC needs to:
a. Understand what the people of Sidmouth want for their town – perhaps they could invite residents to submit ideas, and then see what support there was from other residents for these ideas. (A radical thought this – believing that the local residents might actually have some ideas, but I guess I am a radical.)
b. Produce some DRAFT proposals;
c. Communicate them effectively to Sidmouth residents and undertake real consultation with residents, listening to their responses and adjusting their proposals appropriately. If plans have altered significantly, repeat this step.
d. Produce final proposals and put them to a Town Referendum.

Meanwhile, though, it seems that proposals from central government might not be that helpful:
Cameron launches attack on housing associations | Online News | Building
The Tories' affordable-housing plan is a middle-class giveaway | The Economist
4 charts that show how David Cameron's housing policy helps the rich at the expense of the poor | UK Politics | News | The Independent
David Cameron’s plan for discount 'starter' homes is laughable | Voices | The Independent

As reported earlier by the EDW blog:

7 OCT 2015
Hard to see how this will help in East Devon – except that it will further benefit developers:


“In one of his central policies due to be unveiled in his closing speech, Cameron will say: “For years politicians have been talking about building what they call affordable homes but the phrase was deceptive. It basically means ones that were only available for rent. What people want are homes they can actually own.


“When a generation of hardworking men and women in their 20s and 30s are waking up each morning in their childhood bedrooms, that should be a wake-up call for all of us. We need a national crusade to get houses built. That means banks lending, government releasing land and, yes, planning being reformed.”
In the key reform, ministers will change the definition of affordable housing to include not just properties for rent, but starter homes, as part of the government’s programme to build low-cost homes for first-time buyers so long as they are under 40 years old. It will mean developers will have fulfilled their obligations to a council if they build homes for purchase.
Under the scheme, houses must must be 20% below the market rent and capped at £450,000 inside London and £250,000 outside. …


… The scheme is likely to be popular with developers, who prefer building homes for purchase as they immediately receive income on the property’s sale, unlike a rented property that involves a much slower rental income stream spread over as long as 20 years..
David Cameron vows to scrap requirement to build affordable homes for rent | Society | The Guardian
Meaning of “affordable home” to change to benefit developers – rented homes excluded | East Devon Watch
Developers will not have to pay for infrastructure, schools | East Devon Watch

These government proposals will have an effect elsewhere in the District:
Seaton/Colyford green wedge attacked yet again by same developers who lost on appeal | East Devon Watch