Plastic bags: You can't throw something away, because there is no 'away'

Throwing stuff 'away' actually makes no sense:
Futures Forum: Slavoj Žižek: on there being "no metaphysical 'beyond' to put our waste" ..... on "the crisis of late capitalism" ..... and on "the comforting mythology of the recycling industry."

Jeremy Irons has pointed this out more than once:

The Majestic Plastic Bag - A Mockumentary - YouTube
Web extra: Jeremy Irons on why he doesn't throw stuff out - YouTube

And the Independent pointed this out again yesterday:

You can't throw something away, because there is no 'away' 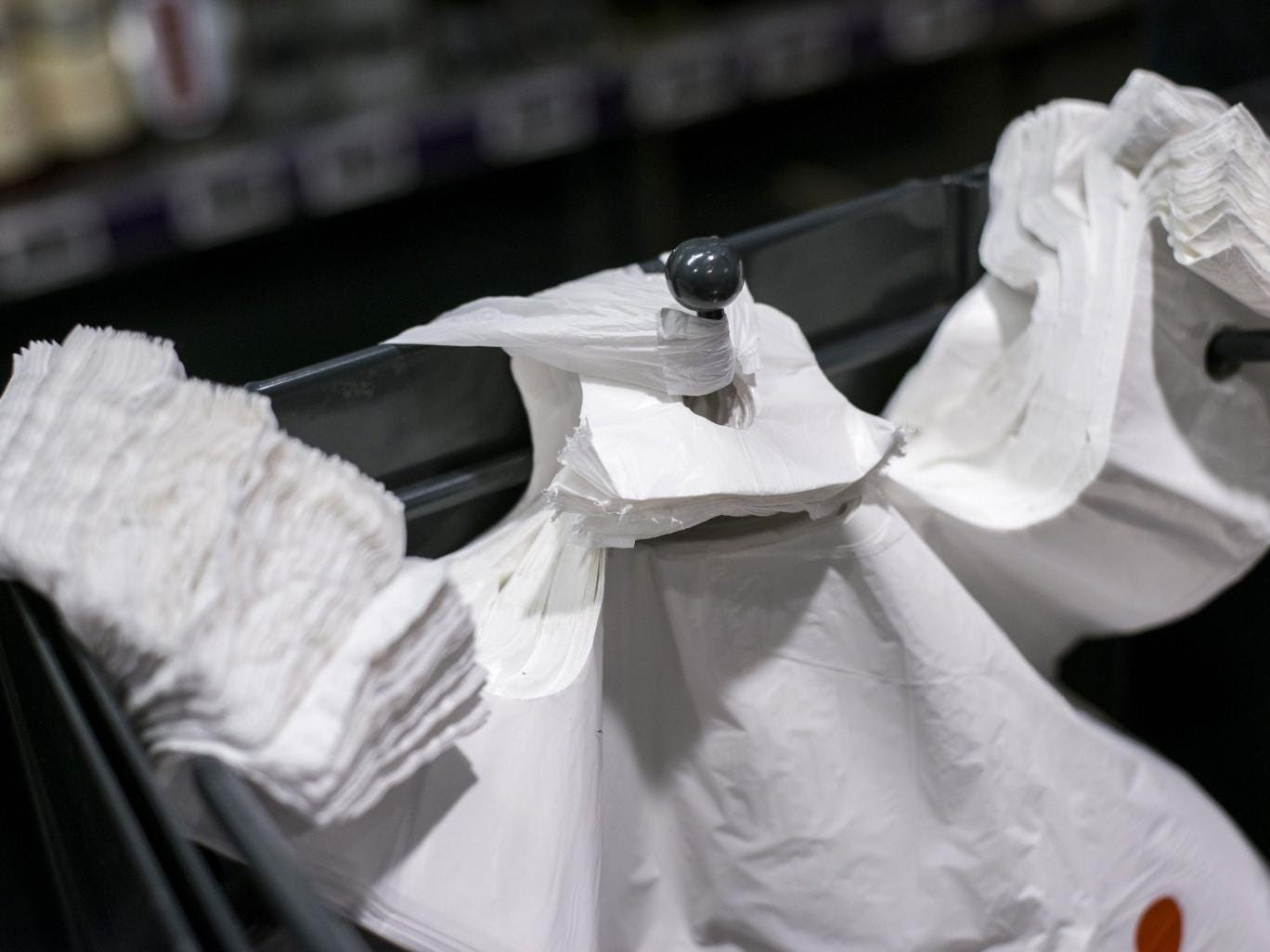 Marks and Spencer, which voluntarily introduced a 5p charge in 2007, reported an 80 per cent reduction in the number of bags used FRED DUFOUR/AFP/Getty Images

The plastic bag tax comes into effect in England on Monday. Although it is not a tax. It is a 5p charge that large retailers are required to impose on customers, the proceeds of which they have promised to allocate to “good causes”. As we report today, the public know little about the new law, and would prefer to have a say in how the proceeds are spent.

Members of the public would be justified in being surprised to discover that the shops decide how to spend the revenue. The law is a good idea, but it seems to have been influenced too much in its drafting by the grocery giants. They have persuaded the Government to accept a voluntary deal under which they agree to spend the money raised on what they deem to be good causes.

At least that means the charge will achieve its main objective, which is to reduce the use of single-use plastic bags. Plastic carrier bags are damaging to the environment and a threat to wildlife. Plastics generally are a problem because they last for ever, and the plastic bag charge is a small but significant step towards the principle of green taxes – using prices to reflect the cost of environmental damage.

In Ireland, Northern Ireland, Wales and Scotland, all of which brought in charges before England (Ireland as long ago as 2002), bag use fell sharply. Marks and Spencer, which voluntarily introduced a 5p charge in 2007, reported an 80 per cent reduction in the number of bags used.

But the English law, as well as coming in later than in other countries, is also weaker than those in other parts of the British Isles. The Government has missed the chance to use the revenue from the charge to promote green alternatives.

As it is, the companies can define what they think is a “good cause”, and can include administration costs and staff training in their accounting for it. This is a shame, because one of the advantages of green taxes is that, as well as making pollution more expensive, the revenue from them could be used to make sustainable activities cheaper.

Thus a small step in the right direction is made slightly smaller. Plastic bags are only the most visible part of a growing mountain of waste that green taxes could help to constrain.

The spread of plastic bottles has been almost as visible and the rest of the UK should be following Scotland’s lead in considering “deposit-and- return” schemes. The bottles should also be made more expensive, along with plastic packaging generally, as a step towards green taxes on all non-biodegradable plastics.

This newspaper has campaigned against excessive packaging, and the best way to change people’s behaviour is to use the price mechanism rather than to blame retailers for trying to make their products more attractive.

Of course, campaigns against plastic bags and excessive packaging are only small change in the greater challenge of the global environment, namely climate change. But the same principles of sustainability apply. We need to reduce our use of non-renewable resources and switch to renewable alternatives.

At both the local and the global level, the price mechanism is one of the most important ways of changing behaviour. From the plastic bag tax to a carbon tax on the burning of fossil fuels, green taxes are crucial to harnessing market forces for environmentally sustainable ends.

So we welcome the chance for people in England to pay 5p a bag from tomorrow, but say that it does not go far enough. The revenue should go towards repairing the damage caused by plastics to the environment. And the new charge should be seen as an early downpayment on a comprehensive plan for green taxes.

After all, remember that you can throw it away, but there is no “away”.

You can't throw something away, because there is no 'away' | Editorials | Voices | The Independent

Most people would rather the money went to local environmental projects:
Plastic bag tax: It's here, and it's green, but retailers will decide where the money goes | Home News | News | The Independent

However, whilst the new regulations only apply to larger retailers, others have decided to opt in:
Corner shops to charge customers 5p for using plastic bags | Environment | The Independent

On-line retailers are having teething problems:
Ocado angers customers by charging 5p for bags without offering opt out | Home News | News | The Independent

The Independent gives us a handy guide:
Carrier bag Q&A: everything you need to know about the 5p charge | Business News | News | The Independent

And from two years ago:
Futures Forum: Recycling plastics in England: 5p per bag
.
.
.
Posted by Jeremy Woodward at 02:16