The District Council has proposed doing something with the car park in Mill Street (part of Eastern Town, in the centre of Sidmouth):
23 September 2015 - Affordable housing could provide solution for underperforming Sidmouth car park - East Devon

The reason being that Sidmouth - as with everywhere - is lacking in affordable housing:
Futures Forum: A solution to our housing problems: build on car parks

However, the Chamber of Commerce is concerned that the centre of town is losing too many car-parking spaces as it is:
Futures Forum: Sidmouth parking issues: decreasing capacity at Ham Lane

Moreover, fears have been expressed by Sidmouth District Councillors that this move is part of the intention to 'regenerate' Sidmouth - a move which would take any such strategic planning out of the hands of the local community and its representatives - as has happened in Exmouth and Seaton:
Futures Forum: Plans for Port Royal: anticipatimg a Regeneration Board

The District Council's political leadership feels there has been an overreaction:
Futures Forum: Mill Street Blues

But many observers feel there has been a woeful lack of openness around the proposals:
Futures Forum: The District Council, developing Mill Street in Sidmouth ... and transparency

This includes the Town Council: 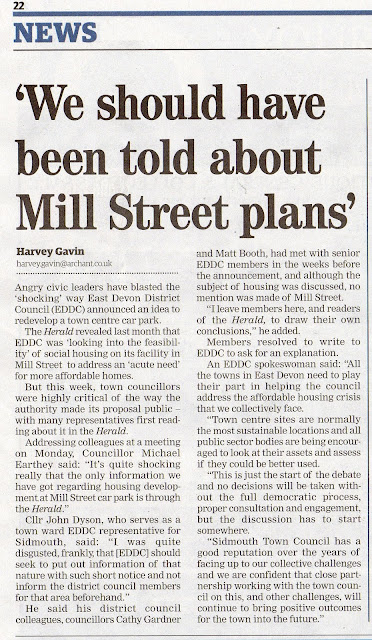 There has been further reaction from District Councillors:


Thou doth protest too much?


The response from the East Devon Conservatives to the item on the front page of last week’s Sidmouth Herald (2 Oct “‘War cry’ over future of eastern town”) surely indicates that I touched a raw nerve. The full press release revealed more about their views of how Sidmouth should develop than I could have hoped for. I therefore provide it for your scrutiny below.
I would like to comment on their method of ‘consultation’. Past evidence shows this is not the comprehensive, bottom-up consultation such as that used in Neighbourhood Planning. No. Draw up plans and then ask a few people some very limited questions on the proposals. Once the results are in the usual practice seems to be to ignore anything that disagrees with the plans and proceed anyway. What I am suggesting is to take a different approach where the views of residents, business owners and even visitors are sought before plans are drawn up. Then continue to consult as practical options are explored. Yes this would take time and effort (and cost a little) but if done with an open mind it would ensure that the people who live and work here see development that enhances Sidmouth and maintains it as a place people love to visit, work in and chose to move to.
I won’t be misled by assurances of ‘consultation’. I won’t be misled by assurances of delivery of affordable housing. How many affordable homes are part of the development around Seaton’s Tesco – not 40%, not 20% – none. I am realistic enough to know that there will always be compromise, but it must be possible to work openly, with public involvement and buy-in.
I know that many people love Sidmouth precisely because it is different – it is one of the only seaside towns in the country to have kept a unique character. We love the history and the old-fashioned charm. It’s easy to destroy this with mediocre development and copying what other towns have by labelling it as ‘progress’. Why should we accept this? It is possible to develop in keeping with the town. Please help keep Sidmouth special.

“MEDIA RELEASE FROM EAST DEVON DISTRICT COUNCIL CONSERVATIVE GROUP
Wednesday 7 October 2015                From Phil Twiss, Group Secretary
Conservatives accuse new EDA councillor of muddled thinking and political mischief
‘WE WANT SIDMOUTH TO MOVE FORWARD, NOT BE HELD BACK’
The Conservative Group on East Devon District Council (EDDC) have hit back at comments made by an East Devon Alliance councillor for her naïve and misleading rant in last week’s Sidmouth Herald.
In the report, EDA Councillor Cathy Gardner, who represents Sidmouth Town Ward, claimed that a proposal to build social housing on the site of a car park in Mill Street was part of a wider plan for Eastern Town and spoke of the town being at risk of ‘fighting a battle but losing a war’.
Cllr Gardner is guilty of muddled thinking and of embarking on a naïve and misleading rant aimed at making political capital out of the vital issue of providing homes for Sidmouth’s young families.
A consultation proposed by the EDA councillor would muddy the waters if and when the district council came to conduct its own public survey – which would take place as part of the normal democratic process.
ROUTINE
No firm plans had yet been drawn up for Mill Street and if and when such proposals were formed, a public consultation would follow as a matter of routine.
It’s all very well for ward representatives to genuinely stand up for what they see as the rights of their constituents. It’s quite another to say things that will mislead people into forming the wrong conclusions, especially when this is based on a poor understanding of how the planning process works.
There is a lot of incorrect information in Councillor Gardner’s reported remarks and this displays either a naïve ignorance of the facts or a desire to stir up a political storm in a teacup – or both.
Councillor Gardner appears to be linking a possible plan for affordable homes in Mill Street with a wider redevelopment scheme for Eastern Town and even the project to create a Beach Management Plan for Sidmouth. Her suggestion that the Beach Management Plan lacked progress is mischievous and untrue.
Derogatory comments about EDDC’s ongoing and successful regeneration projects in Seaton and Exmouth take conspiracy theories to a whole new level of fantasy.
Building homes on the Mill Street site, if this did go ahead, would be part of the district council’s ongoing commitment to providing jobs and affordable housing for Sidmouth’s upcoming generation of school-leavers and young families and was entirely in line with the Government’s wish to see an end to a nationwide housing drought.
MOVE FORWARD
The Conservatives on EDDC want to see the district and its communities move forward, not stay stuck in the present or the past. They are following very carefully developed regeneration strategies in Seaton and Exmouth and these are based on years of careful study and prior consultation with the community.
Ask fair-minded councillors in Seaton and Exmouth whether regeneration projects in their towns have been beneficial and you might get a different view from the jaundiced judgement of Ms Gardner.
Sidmouth must not be left behind. We want to see a number of improvements to help the town move forward and we will resist any attempt by people like Ms Gardner to hold Sidmouth back.
Any assumption by recently elected councillors that nothing happened before they arrived on the scene is both naïve and arrogant.  A lot of good things are happening. These new councillors should make the effort to find out how hard members and officers have worked in the past and resist the temptation to be new brooms sweeping away good ideas just for the sake of scoring cheap political points.

Thou doth protest too much? « East Devon Alliance

And the EDW blog has given us a pertinent comment from an observer:

13 OCT 2015
A correspondent writes:
Councillor Twiss fires off another patronising fusillade at the newly elected Independent councillors who represent Sidmouth at EDDC as reported in last week’s Herald. “These new boys and girls just don’t understand the way things are done around here” seems to be the tenor of his comments. Cllr Gardner is accused of “Making political capital out of the vital issue of providing homes for Sidmouth’s young families”.
“The proposal to build social housing on the Mill Street car park at the cost of the existing residents around it losing vital car parking spaces is another case of using pious words to cover up previous mistakes.
We remind Cllr Twiss that in February 2011 the ruling Tory group approved a planning application for a site less than two hundred yards away which was for 12 homes at market rates exclusively for 55 year olds and upwards which have only very recently been completed! Then known as Parsons Yard it is now called Mill Gardens. Where are the homes for Sidmouth’s young families there? Perhaps they don’t generate the Council Tax revenue that these new ones do!”
Development at Mill Street Car Park Sidmouth | East Devon Watch

Meanwhile, there is the relevance of the neighbourhood plan as context for this 'battle':
Recent case law on the validity of Neighbourhood Plans | East Devon Watch
Local Government Lawyer - Challenges to neighbourhood plans
.
.
.
Posted by Jeremy Woodward at 13:58