VW... and making 'wholly opaque disposable vehicles' >>> rather than making vehicles which 'run for a long time and are easy to fix'

Another issue is 'intellectual property rights': 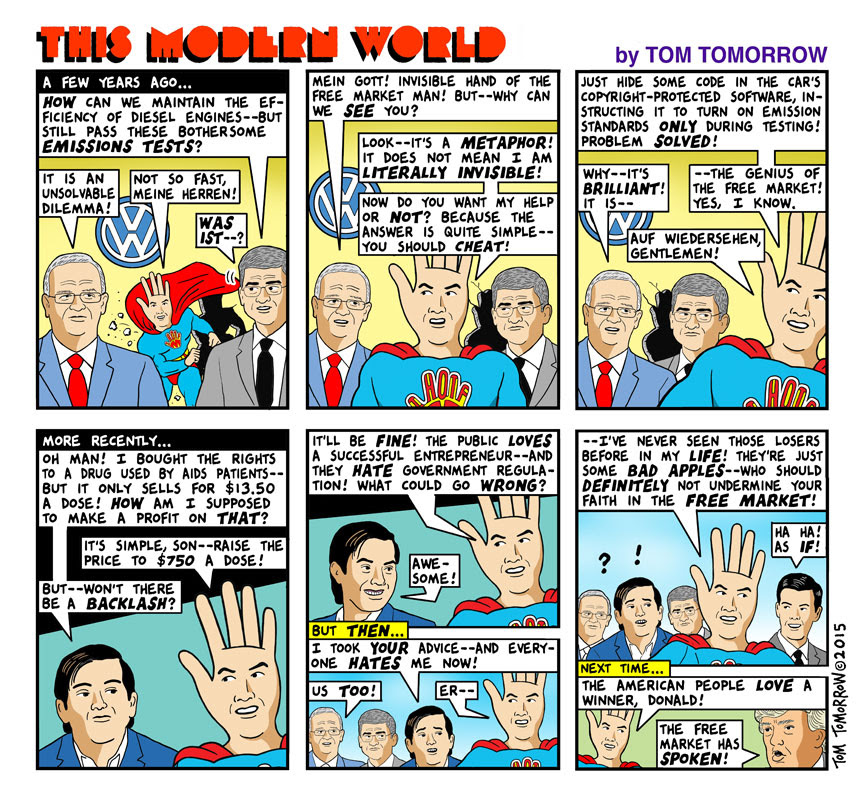 This comment suggests how VW will benefit from this 'scandal':

Dieselgate: Why VW Will Come Out Smelling Like Roses

Details have been emerging this week of a clever trick pulled by Volkswagen in North America. The German-based automaker is alleged to have been using software to cheat EPA emissions tests for millions of its turbocharged direct injection (TDI) diesel engine Volkswagen and Audi cars dating back to 2009.

New vehicles pretty much the world over are required by law to be controlled by a computer featuring a standardized on-board diagnostic (OBD) system, which is used in many countries for periodic compulsory emissions tests. Someone at VW figured out how to get the engine management firmware to sense when an emissions test was being performed and to deliver the desired output signals contrary to what was really happening.

The revelations may seem like a blow to Volkswagen. But closer analysis of the situation through the lens of anarchist political economy reveals how the scandal could end up benefiting the established motor industry, including Volkswagen.

In a way some of the earlier TDIs were the last of the open engines. It’s obvious why they’ve dominated the performance-diesel market despite some very impressive offerings from competitors. They were basically derivatives of the old EA827 diesel engine of the 1970s with combustion-chamber improvements, a turbocharger, and a thin veneer of purely supplementary electronic control. The result was a package which outperformed many comparable spark-ignition engines right out of the box, but which could be made to do some truly silly things by fiddling with the mechanical diesel injector pump and the turbocharger. If one is lucky enough to be clear of emissions-inspection requirements the ultimate home-brew high-performance development is what is called an M-TDI (M for mechanical) wherein the electronic controls are summarily deleted. And, being an extremely compact engine, the 1.9TDI has been a popular candidate for engine swaps: Small 4×4 Suzukis are common recipients. The engines affected by the current scandal have a later, cheaper common-rail injection system, because VW doesn’t want to make the mechanical-pump TDI engine.

Volkswagen has a nasty habit of making things with a huge following but which it doesn’t particularly want to make. Part of the reason VW continues to do so is because repeat business is a huge asset to it. But it is based on the expectation that the TDI engine will lose VW money. Consequently, a paradoxical component of VW’s marketing culture has comprised figuring out how to stop making air-cooled Beetles in South America and Mexico, Golf Mk1s and T3 Transporters in South Africa, and TDIs with their expensive mechanical pumps everywhere, without alienating a market which remains ready to buy them as fast as they’re made.

The last thing VW wants is their customers getting their hands dirty. A clue into VW’s real aspirations is given by the 1999 Audi A2 with its “service panel” in lieu of a conventional hood. Though this was part of a larger panel which could be unbolted to gain access to the engine, the message was clear: The mechanism is none of your business.

But the primary motivation for all this is not so much the savings in manufacturing cost. More important is the industry-wide desire to increase the value of the car’s software/firmware relative to its hard parts. Thanks to legal precedents which have proved extremely robust, hard parts are almost impossible to copyright. As we know, this is not the case with software. Hence the drive to make as great a part of the overall product dependent on copyrightable electronic control. And from there, it is not difficult to figure out where OBD really came from.

Keep in mind the nitrogen oxide (NOx) emissions which were the subject of the TDI-OBD trick are readily absorbed into the natural nitrogen cycle as long as overall emissions are low. At levels corresponding to the amount of vehicle traffic the established motor industry needs to stay in business, however, the NOx would cause photochemical smog and precipitate as acid rain, but for cumbersome gadgetry which serves no purpose except to make gridlock vaguely viable. The problem isn’t NOx. The problem isn’t even emissions. The problem is too much vehicle traffic. The problem is dependence on vehicular mobility.

And dependence on vehicular mobility is something the established motor industry has cultivated for a very long time by exercising the oligopoly power which it receives from the state through regulation which effectively outlaws competition from outside. Thus, by enabling ever-increasing vehicle traffic, regulation has managed to make environmental problems a lot worse.

A “duly chastened” VW will be back with a vengeance, making the wholly opaque disposable vehicles it really wants to make, just like the rest of the industry.

Center for a Stateless Society » Dieselgate: Why VW Will Come Out Smelling Like Roses

Another piece of engine work to come out of Germany was the MX motorbike:
MZ Motorrad- und Zweiradwerk - Wikipedia, the free encyclopedia
Startseite - MuZ Vertriebs GmbH

It was popular because 'it needed to run for a long time and be easy to fix': 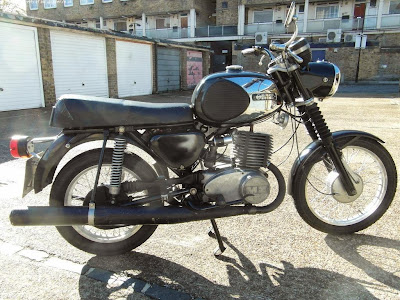 MZ stands for Motorradwerk Zschopau, and the bike -- a 1980 model -- is a product of the East German state. It looks like it, too, doesn't it? Styling reminiscent of Robert Pirsig's 1960s Honda CB77. Drum brakes, front and back. A kick starter. A two-stroke engine in which petrol and oil are mixed in the tank. This is exactly the sort of thing I would have expected to see sitting on the other side as they tore down the Berlin Wall.

According to the bike's advert, this little beauty "smells of the 1970s."

After the collapse of the Berlin Wall, poor MZ struggled in the capitalist world. According to Wikipedia, the company's spent the last quarter century being bounced from one ineffective foreign owner to the next.

This is East German technology; it needed to run for a long time and be easy to fix, because no one had any money. The 5-speed machine apparently has a decent amount of pace -- I found YouTube video of a Polish guy pushing one to 115 km (71 mph) -- and it returns something close to 70 miles per gallon.

... brings us to a further critique of the system which gives us bad cars and bad bikes:

Out of the Office
Fast bikes, slow food, and the workplace wars.

For [Matthew B.] Crawford [“Shop Class as Soulcraft: An Inquiry Into the Value of Work”] , the failure to appreciate skilled manual labor is a symptom of something even worse: a narcissistic refusal to grapple with the material world. He quotes a long scene from “Zen and the Art of Motorcycle Maintenance,” in which the narrator has a frustrating encounter with careless mechanics who can’t be bothered to correctly diagnose his bike. Crawford’s stern verdict: this is “at once an ethical and a cognitive failure.” Such mechanics show, in their disregard for the motorcycle, how little they care about their profession, and, by extension, their fellow-citizens.

Crawford says that big corporations—including, for instance, the ones that produce cheap motorcycle engines that aren’t worth fixing—tend to encourage this kind of anomie, by forcing workers to stick to mindless tasks or insipid scripts, thereby making it hard for them to take pride in their work.

But Crawford is no Marxist. For him, the solution to big business is small business; he pits the work ethic and scrappy spirit of “small commercial enterprise” against the “softly despotic tendencies” of “outsized corporations.” His book takes up a variant of William F. Buckley’s old conservative rallying cry: it stands athwart capitalism, yelling, “Stop.”

Out of the Office - The New Yorker