Sidmouth is certainly 'affluent':
Futures Forum: Nice posh Sidmouth has a Waitrose: but could it do with a more down-to-earth Morrison's? Perhaps not...

This is the lead story on the digital pages of today's Herald:

Students were asked to bring three tins of food instead of a cash donation at a recent non-uniform day. Volunteers from the Sid Valley Food Bank and students from St John's International School sort through donations

Organisers at the Sid Valley Food Bank have praised pupils from St John’s International School after their generosity ensured the service’s shelves are stocked for weeks to come.

The huge haul of provisions was delivered to the charity, which operates out of the Unitarian Chapel in All Saints Road, last Friday (October 9) ahead of its busiest time of year.

Food bank manager Lois Swarbrick said: “I knew I was going to get a delivery of harvest food from St John’s school, but had not anticipated the volume. We had eight volunteers working flat-out for nearly three hours and we only just managed to get most of the food sorted and dated. Thanks to the huge generous donations the food bank is now really well stocked.”

Lois said October is traditionally when the service sees an influx of clients - as higher utility bills can make it harder for families and individuals to make ends meet.

“It is this time every year that we get busier,” she said. “As soon as the nights get darker, the heating goes on and kids go back to school. The last three weeks between 10 and 12 clients have come in. I don’t anticipate that will slow down for a while.”

It depends how you measure 'poverty'.

Certainly, 'absolute poverty' is on the decline worldwide:

When you read that world poverty has fallen below 10% for the first time ever and you want to know how we know — the answer is Deaton’s work on household surveys, data collection and welfare measurement.

Angus Deaton, the winner of this year's Nobel Prize in economics, has been critical about proposed changes in how we measure 'poverty':

Deaton has taken some interest in 'poverty':
Angus Deaton: a popular choice in tune with renewed focus on inequality | Business | The Guardian

This is 'absolute poverty':
Extreme poverty - Wikipedia, the free encyclopedia

Which is different to 'relative poverty', defined contextually as economic inequality in the location or society in which people live.[3][4]
Poverty - Wikipedia, the free encyclopedia

Relative poverty is the "most useful measure for ascertaining poverty rates in wealthy developed nations."[49][50][51][52][53] Relative poverty measure is used by the United Nations Development Program(UNDP), the United Nations Children’s Fund(UNICEF), the Organisation for Economic Co-operation and Development (OECD) and Canadian poverty researchers.[49][50][51][52][53] In the European Union, the "relative poverty measure is the most prominent and most–quoted of the EU social inclusion indicators."[54]

"Relative poverty reflects better the cost of social inclusion and equality of opportunity in a specific time and space."[55]

"Once economic development has progressed beyond a certain minimum level, the rub of the poverty problem – from the point of view of both the poor individual and of the societies in which they live – is not so much the effects of poverty in any absolute form but the effects of the contrast, daily perceived, between the lives of the poor and the lives of those around them. For practical purposes, the problem of poverty in the industrialized nations today is a problem of relative poverty (page 9)."[55][56]

In 1776 Adam Smith in the Wealth of Nations argued that poverty is the inability to afford, "not only the commodities which are indispensably necessary for the support of life, but whatever the custom of the country renders it indecent for creditable people, even of the lowest order, to be without."[57][58]

In 1958 J. K. Galbraith argued that, "People are poverty stricken when their income, even if adequate for survival, falls markedly behind that of their community."[58][59]

In 1964 in a joint committee economic President's report in the United States, Republicans endorsed the concept of relative poverty. ”No objective definition of poverty exists... The definition varies from place to place and time to time. In America as our standard of living rises, so does our idea of what is substandard."[58][60]

In 1965 Rose Friedman argued for the use of relative poverty claiming that the definition of poverty changes with general living standards. Those labelled as poor in 1995, would have had "a higher standard of living than many labelled not poor" in 1965.[58][61]

In 1979, British sociologist, Peter Townsendpublished his famous definition, "individuals [...] can be said to be in poverty when they lack the resources to obtain the types of diet, participate in the activities and have the living conditions and amenities which are customary, or are at least widely encouraged or approved, in the societies to which they belong (page 31)."[62]

Brian Nolan and Christopher T. Whelan of the Economic and Social Research Institute (ESRI) in Ireland explained that, "[P]overty has to be seen in terms of the standard of living of the society in question."[63]

Relative poverty measures are used as official poverty rates by the European Union, UNICEF and the OEDC. The main poverty line used in the OECD and the European Union is based on "economic distance", a level of income set at 60% of the median household income.[64]

But certain statistics are very clear: 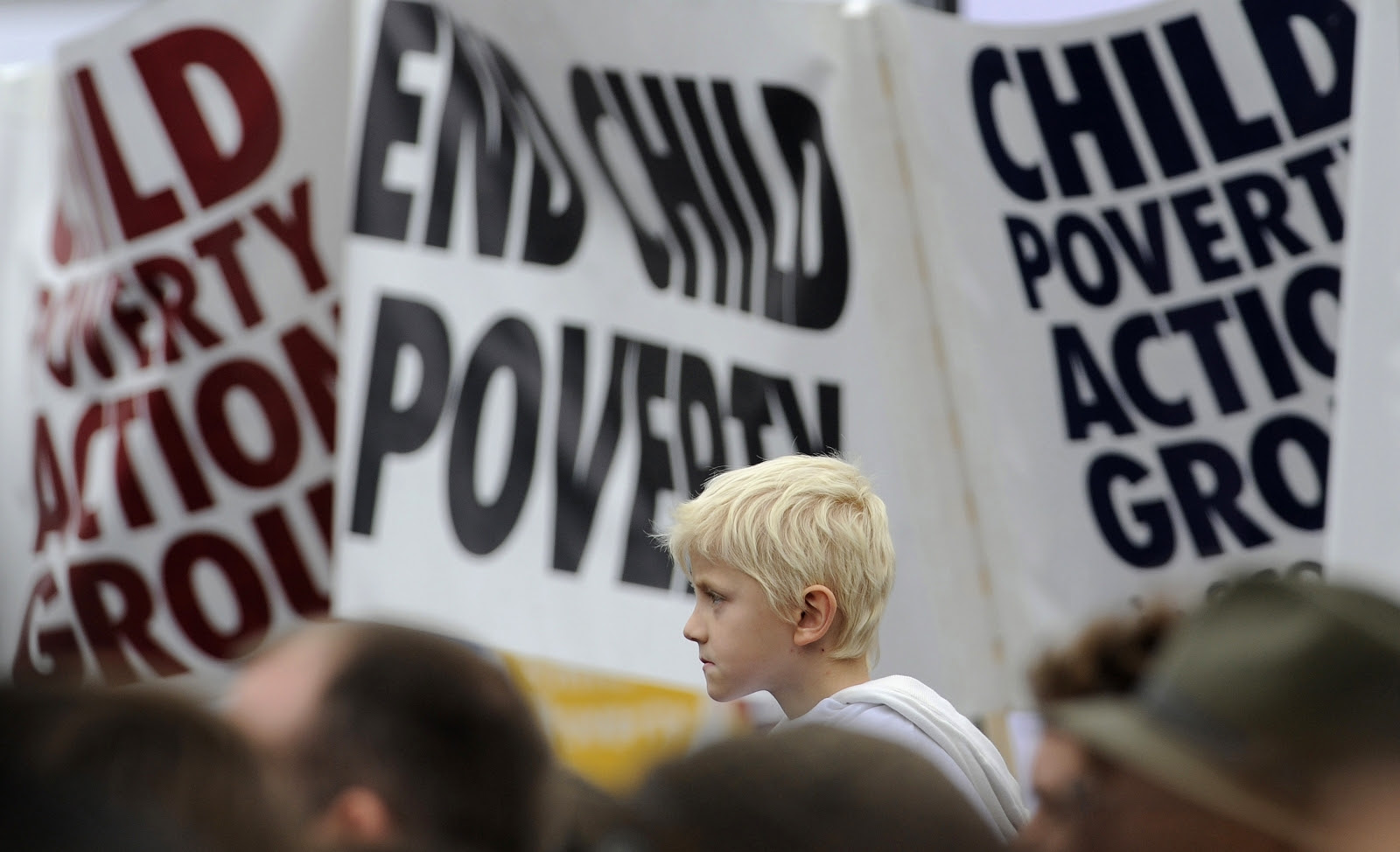 The number of people living in "absolute poverty" in the UK is 300,000 more than previously thought, according to the Joseph Rowntree Foundation (JRF).

The study, which was conducted by the Institute for Fiscal Studies (IFS), found that big increases in food and energy prices mean that poorer households have experienced larger increases in their living costs than have richer households.

The report estimated, after taking into account differential inflation since 2010/11, that the number of people recorded in "absolute poverty" would have been about 0.5% higher than given by the standard measure in 2013/14, implying an additional 300,000 more people.

The research also revealed that the increase in "relative poverty" at the start of the recession would have been greater.

"In recent years, lower income households have tended to see bigger increases in their cost of living than have better off households," said Peter Levell, a research economist at the IFS. "Official poverty measures do not take this into account and hence have arguably understated recent increases in absolute poverty by a small but not insignificant margin."

The report explained that poorer households tend to devote a greater fraction of their budgets to things like energy and food, the prices of which have risen more quickly than have prices on average.

In contrast, richer households spend more on things like motoring and mortgage interest the costs of which, at times, have been rising less quickly than the average.

Which might explain increases in poverty in Devon:
Mapping food poverty | Devon Strategic Partnership
Child poverty in Devon and Cornwall 'as high as 40 per cent' in worst hotspots | Western Morning News
A fifth of North Devon and Torridge children live in poverty, as Government proposes tax credit cuts | North Devon Journal
A third of South Devon workers earn below the Living wage | Torquay Herald Express
Exeter Food Fight's Big Picnic: we throw away half of all the food we buy | Exeter Express and Echo

Although East Devon is by no means the worst off:
Ilfracombe people are dying too young - News - North Devon Gazette

The 'dismal science' is not a 'science' as such:

Don’t let the Nobel prize fool you. Economics is not a science 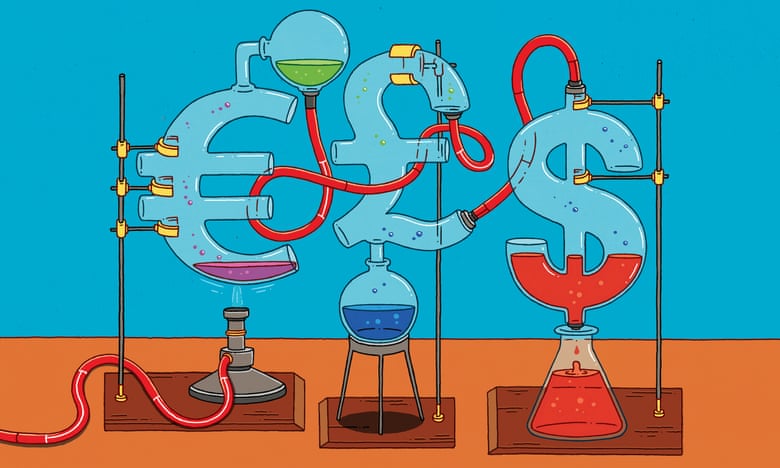 Business as usual. That will be the implicit message when the Sveriges Riksbank announces this year’s winner of the “Prize in Economic Sciences in Memory of Alfred Nobel”, to give it its full title. Seven years ago this autumn, practically the entire mainstream economics profession was caught off guard by the global financial crash and the “worst panic since the 1930s” that followed. And yet on Monday the glorification of economics as a scientific field on a par with physics, chemistry and medicine will continue.

The problem is not so much that there is a Nobel prize in economics, but that there are no equivalent prizes in psychology, sociology, anthropology. Economics, this seems to say, is not a social science but an exact one, like physics or chemistry – a distinction that not only encourages hubris among economists but also changes the way we think about the economy.

A Nobel prize in economics implies that the human world operates much like the physical world: that it can be described and understood in neutral terms, and that it lends itself to modelling, like chemical reactions or the movement of the stars. It creates the impression that economists are not in the business of constructing inherently imperfect theories, but of discovering timeless truths.

To illustrate just how dangerous that kind of belief can be, one only need to consider the fate of Long-Term Capital Management, a hedge fund set up by, among others, the economists Myron Scholes and Robert Merton in 1994. With their work on derivatives, Scholes and Merton seemed to have hit on a formula that yielded a safe but lucrative trading strategy. In 1997 they were awarded the Nobel prize. A year later, Long-Term Capital Management lost $4.6bn (£3bn)in less than four months; a bailout was required to avert the threat to the global financial system. Markets, it seemed, didn’t always behave like scientific models.

In the decade that followed, the same over-confidence in the power and wisdom of financial models bred a disastrous culture of complacency, ending in the 2008 crash. Why should bankers ask themselves if a lucrative new complex financial product is safe when the models tell them it is? Why give regulators real power when models can do their work for them?


Don’t let the Nobel prize fool you. Economics is not a science | Joris Luyendijk | Comment is free | The Guardian
.
.
.
Posted by Jeremy Woodward at 14:59