A wry observation from a correspondent:

Due to the Banker's crisis there have been very few major public capital project schemes. EDDC it would appear seems to be strangely recession proof, perhaps the just-completed £90M Brent Civic Centre by Wembly Stadium is what they have in mind. Hopkins Architects’ new Brent Civic Centre in north-west London was officially opened last weekend.
The centre includes the new Wembley library and opened its doors earlier this summer.
Standing in the shadow of Wembley stadium, the building houses the council’s civic, public and administrative functions under one roof and provides space for 2,000 staff. The atrium acts as the main visitor entrance for the civic centre. All of the slimline steelwork is visible and is an important aesthetic element of the 31m-high structure.
Brent Council leader Muhammed Butt said: “The event was about bringing people together to celebrate this fantastic, state-of-the-art building.”
The project has been given a Breeam ‘Outstanding’ rating and is the first project in its category to have achieved this.

At a time when local authorities are being forced to make cuts, it might seem strange for Brent, the most deprived borough in west London, to be unveiling a new £90m council headquarters. But the gleaming new civic centre, which stands in the shadow of Wembley stadium, is no ordinary council office. Designed by Hopkins, architects of the palatial Portcullis House at Westminster, it is conceived as a 21st-century machine for delivering public services – and making money.
Bringing together every council department of one of London's largest boroughs – currently housed in 14 buildings scattered across the area – it combines the functions of a town hall and conference centre, wedding venue and public library, cafe and "customer service centre". Before its opening, it has been declared the most sustainable public building in the UK, complete with a boiler that runs on fish oil. 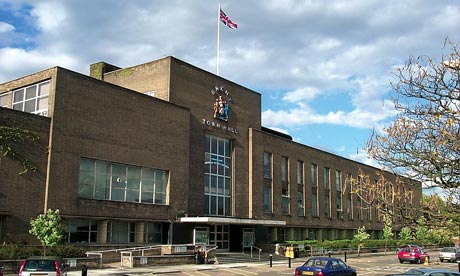 Brent Town Hall, which is one of 14 buildings to be consolidated into a new civic centre.
Brent council has introduced remote working for most employees in a bid to cut the cost of office space and improve productivity.
The programme began two years ago with a plan to cut the financial drain of unused desk space by condensing the council's 14 buildings into a new civic centre. Brent's chief information officer Stephan Conaway explained that the council decided to implement remote working for the majority of employees ahead of the move to the new headquarters, which will open in summer 2013, as this could enable staff such as environmental inspectors and social workers who often work "on the road" to operate more efficiently.
By enabling staff to file reports, sign forms and undertake other administrative tasks via mobile phones, laptops and tablets, the council hopes to decrease time spent in transit and increase productivity.

Economic development should be underpinned by low-carbon, climate resilient growth, while protecting the communities and markets in which business operatesSponsored feature 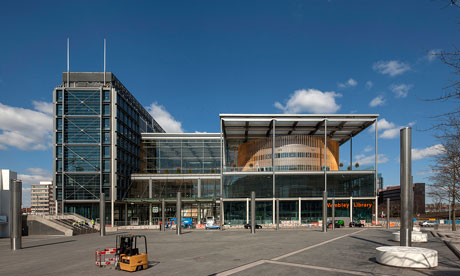