Telegraph campaign: Hands off Our Land

The Telegraph has been leading this campaign for over eighteen months now:

The Telegraph's Hands Off Our Land campaign is calling for the Coalition to look again at proposed changes to planning laws which risk undermining the safeguards that have protected the countryside for almost 70 years.
Hands Off Our Land: latest - Telegraph

CAMPAIGN: HANDS OFF OUR LAND

The Telegraph is campaigning against radical Government reforms to planning laws which opponents say pose the greatest threat to the countryside since the Second World War. Read about the controversy in detail and join in the debate here.

Hands Off Our Land: have your say

Reforms to planning laws will mean rural towns and villages may be forced to accept new building developments - even if it means large parts of countryside may be lost. What is your view? Comment and vote in our poll here.
299 Comments

Hands Off Our Land: areas at risk

Interactive graphic showing rural areas of England which could be lost to development if tight planning laws are changed. The countryside has been protected by tight laws since the 1940s.

Hands Off Our Land: the debate

hands off our land: latest

Announcement likely to be seen as response to Ed Miliband’s Labour Conference speech, in which he said developers would have land seized if they failed to use it
| 308 Comments

Builders: the saviours of meadows?

A new housing development in Oxfordshire is pioneering 'biodiversity offsetting' - is this good for the countryside, asks Geoffrey Lean
| 37 Comments

Old people and immigrants are forcing the Government to relax planning rules and allow more houses to be built on the greenbelt, Nick Boles has said.
| 1000 Comments

The landscape could become one of the first casualties of plans to build new houses in national parks.
| 97 Comments

Our glorious land in peril

After selecting his 100 favourite views for a new book, National Trust chairman Sir Simon Jenkins explains why he fears for the future of our stunning scenery
| 32 Comments

Telegraph View: Ed Miliband’s strategy is to let bureaucrats determine what must be built and where
| 81 Comments

Developers could build in national parks if they make up for the damage elsewhere, Owen Paterson to say

Developers could be allowed to build in national parks if they agree to make up for the damage elsewhere, the Environment secretary says today.
| 8 Comments

Curbs on building in national parks should be relaxed to allow commmunities to develop, according to the planning minister.

Planning minister Nick Boles warns that the Conservatives could lose the next election if they do no build enough new homes.
| 170 Comments

In Hands Off Our Land

Hands Off Our Land campaign: latest

Hands Off Our Land: Letters to the Editor

Hands Off Our Land: Matt cartoons

Hands Off Our Land: key areas under threat

Hands Off Our Land: by numbers

Hands Off Our Land - Telegraph


Is this a change in direction for the paper?
So thinks the Guardian:

The Torygraph is dead and gone, but the Telegraph is a trickier beast

The Daily Telegraph has cut itself loose of the Conservative party, and adopted a champion-of-the-people worldview 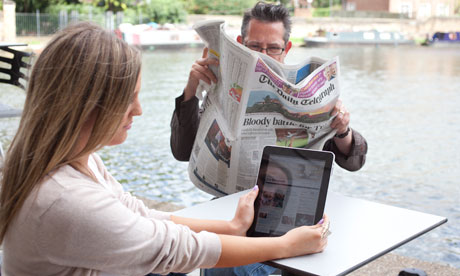 In the Telegraph, ‘stern criticism of the Conservatives that would once have been a notable occurrence is now a regular event.’ Photograph: Frank Baron for the Observer
Just as the Church of England used to be the Conservative party at prayer, the Daily Telegraph was at one time the Conservative party at breakfast. Marmalade, English breakfast tea and a hefty dose of support for the party leadership went hand in hand.
The Torygraph tag, certainly popularised by Private Eye if not invented by it, was a fair one for a newspaper that backed the blues through thick and thin.
But things have changed. The most stark evidence of a shift in attitude is the paper's long-running Hands Off Our Land campaign against the government's reforms to the planning system, has involved everything from petition-gathering with various pressure groups to hardline critiques of ministers who are supposedly wrecking everything green and/or pleasant. While Nick Boles has been given a more sympathetic hearing recently, he would be the first to admit he's had a torrid time at the Telegraph's hands.
The gloves have well and truly come off.
This isn't a new trend, of course. Insiders at the paper point to its fractious relationship with John Major as evidence that it has been quite some time since the Torygraph nickname was entirely true, and our ownTim Montgomerie wrote in 2007 about the ructions between it and Team Cameron.
While those examples could be written off as bumps in the road or temporary personality clashes, though, it seems clear that there has been a permanent realignment. Stern criticism of the Conservatives that would once have been a notable occurrence is now a regular event – indeed, such criticism has become an integral part of the paper's message.

The Torygraph is dead and gone, but the Telegraph is a trickier beast | Comment is free | theguardian.com


The campaign is not without its critics:

Pointman - you are very very

SUBMITTED BY ANONYMOUS ON TUE, 07/02/2012 - 16:58.
Pointman - you are very very wrong with your believe that Cornwall is the most 'unspoilt' countryside in england - it is the most spoilt (post industrial) landscape in Europe. The soils are saturated with residue heavy metals to render new development far too costly for all but the most determined and wealthy developer.
The belief that we have a disposable countryside is also questionable. It is certainly not being used probably and I agree with the main thrust of the argument in that we should not continue to think that our landscape is anything extraordinary - but it can be!
But one point that everyone seems to dismiss, yet it is important, that in English common law it remains the case that all 'land onwership' is in fact freehold tenure. We need to provide housing and we need to ensure good design, we need to preserve biodiversity and culture and a platform for 21st century economics in a resourceless country - surely what is most needed is proper sustainable development, which exists it is just that the English struggle to understand what is fairly basic concept. NIMBYs paying for their Telegraph or NT membership do not understand it and neither do those who see nothing wrong with the childish draft NPPF Greg Clark was so chuffed with.
THREE CHEERS FOR 'URBAN SPRAWL' | martindurkin.com
Martin Durkin tv director and producer for wagTV