"... a reckless use of public money at a time when people are very concerned about energy costs.”

An interesting article from the BBC last week.
Were you aware of the extent of these subsidies? 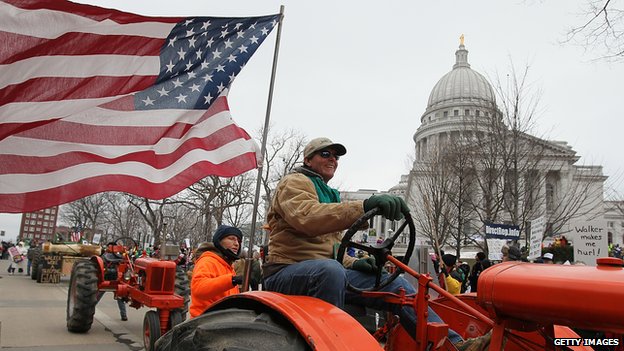 The world is spending half a trillion dollars on fossil fuel subsidies every year, according to a new report.
The Overseas Development Institute (ODI) says rich countries are spending seven times more supporting coal, oil and gas than they are on helping poorer nations fight climate change.
Some countries including Egypt, Morocco and Pakistan, have subsidies bigger than the national fiscal deficit.
The new report calls on the G20 to phase out the payments by 2020.
While there is no globally agreed definition of what a fossil fuel subsidy actually is, the report draws on a range of sources from the International Monetary Fund to the International Energy Agency.
Continue reading the main story

Kevin WatkinsODI
It details the range of financial help given to oil, coal and gas producers and consumers from national governments and through international development.
What emerges is a complicated web of different types of payments in different countries.
Fossil funding

In the United States, for example, the government in 2011 gave a $1bn fuel tax exemption to farmers, $1bn for the strategic petroleum reserve and $0.5bn for oil, coal and gas research and development.
Germany gave financial assistance totalling 1.9bn euro to the hard coal sector in the same year.
And the UK gave tax concessions worth £280m in 2011 for oil and gas production.
Continue reading the main story

Pakistan is a country with the second highest number of children out of school in the world. It has some of the worst nutrition, maternal mortality and child health indicators. But the report highlights that it is spending twice as much on energy subsidies as it is on primary education and basic healthcare.
"If you ask what is the most cost effective use of Pakistan's resources in terms of national development, I would say this is about the most perverse use of public funds you could come up with," said Kevin Watkins.
He says that reform is possible and points to Iran as a good example where fuel subsidies have been cut and replaced with direct cash transfers to the poor.
"Iran is one of the best cases, it's an example of phasing out a system that benefits the rich and contributes to climate change and replacing it with subsidies that make a difference to people's lives."
The report accuses rich governments of "shooting themselves in both feet" by undermining attempts to put a price on carbon and by giving no incentive to companies to switch from high carbon fuels.
"This is a reckless use of public money at a time when people are very concerned about energy costs," Kevin Watkins, executive director of the ODI, told BBC News.
"Why are we spending $112 per adult in the OECD countries subsidising an energy system that is driving us towards dangerous climate change when there are alternatives?"
In developing countries, the report says the subsidies often take the form of keeping fuel prices low to help alleviate poverty.
Governments in Indonesia, Pakistan and Venezuela are spending twice as much on fossil fuel subsidies as they are on public health.
"Almost all these subsidies go to those who are connected to the grid because the governments give money to the energy providers, who pass it on to consumers. 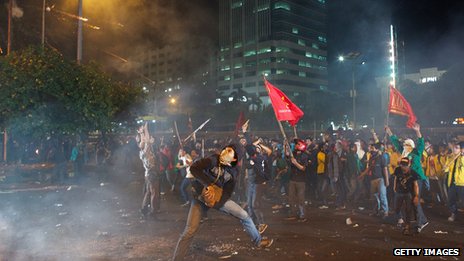 Changes to fuel subsidies in Indonesia lead to rioting earlier this year
"The top 20% of these societies get around half of the total subsidy package," said Kevin Watkins.
International finance for development is hugely focussed on oil, coal and gas. According to the ODI, 75% of energy project support from international banks went to fossil fuel projects in 12 of the highest emitting developing nations.
The research adds to data from the International Energy Agency that says global subsidies for fossil fuels are six times higher than those for renewable energy. The OECD has stated that coal is subject to the lowest levels of taxation.
The ODI hopes that enough countries in the G20 group will follow up on promises made to look at the issue.
The institute believes that subsidies for energy are similar to subsidies for agriculture that plagued international trade negotiations in the 1990s.
Ultimately, agreement was found on removing them. The ODI believes there can be a similar outcome for fuel supports.
"This has to be the mother of all win-win scenarios," said Kevin Watkins.
"You'd have a win for taxpayers, a win for governments north and south and you'd have a win for the planet as well."
Follow Matt on Twitter @mattmcgrathbbc.


Here's another take on the same story, with graphics from the original story:

Governments are 'subsidizing the very activities that are pushing the world towards dangerous climate change,' states new report

Governments are "subsidizing the very activities that are pushing the world towards dangerous climate change," charges a new report. (Photo: Cam Gray/cc/flickr)
The report, Time to Change the Game, from the UK-based think tank Overseas Development Institute (ODI) explains how the subsidies—amounting to over $500 billion globally in 2011—are thwarting a switch to a low-carbon economy.
"The rules of the game are currently biased in favor of fossil fuels," stated report author Shelagh Whitley.
"The status quo encourages energy companies to continue burning high-carbon fossil fuels and offers no incentive to change. We’re throwing money at policies that are only going to make the problem worse in the long run by locking us into dangerous climate change," stated Whitley.
Though the subsidies pad the pockets of the industry, the report's Executive Summary states that if governments'

In addition to the U.S., the countries with the greatest fossil fuel subsidies include Russia, Australia, Germany and the UK.
"The inconsistencies between climate goals and energy policies are becoming increasingly stark," writes ODI director Kevin Watkins.  "Germany is providing lavish support for the construction of new coal plants. Britain offers generous tax concessions for oil and gas exploration, including bumper deals for companies involved in fracking. The United States spends heavily to subsidize gasoline and other fossil fuels. In all of these cases, bold climate-change targets are being undermined by business-as-usual subsidies."
In some countries, including Pakistan, Venezuela and Bangladesh, fossil fuel subsidies are significantly greater than domestic health expenditures.
And while some renewable energy subsidies exist, they're no match for those of fossil fuels.  From the report:

Among the reasons the report lists for why subsidies exist are "special interests."

In the US, individuals and political-action committees affiliated with oil and gas companies have donated $239 million to candidates and parties since the 1990 election.

The benefits of these subsidies are often concentrated among specific actors, while the costs are spread across the general population.

Eliminating the fossil fuel subsidies would not only be a better investments and climate approach, it would also have economic and social benefits, according to the report. To realize those benefits, the G20, responsible for 78% of global carbon emissions from fuel combustion in 2010, should end all fossil fuel subsidies by 2020.
The report urges nations at the upcoming UN climate talks in Warsaw to take up the issue and to agree on a timeline for the phase-out.
Eliminating fossil fuel subsidies would "be the mother of all win-win scenarios," ODI director Kevin Watkins told the BBC.
"You'd have a win for taxpayers, a win for governments north and south and you'd have a win for the planet as well."
* * *
In tandem withe the report, the ODI released a series of infographics including the ones below: