A wind farm for the Jurassic Coast?

There had been plans for a wind farm in Lyme Bay back in 2008, but they were rejected:
Wind farms for Dorset’s coast? (From Bridport and Lyme Regis News)
Crown Estate did not tell locals about huge off-shore windfarm - Telegraph
wind farm fish fear - News - Exmouth Journal

The problem is that many feel such a massive stretch of turbines will spoil the landscape:
Futures Forum: The aesthetics of development: power plants and windfarms

The latest proposal is further down the coast:

· The 2010 Round 3 allocation of sites for offshore wind farms by the Crown Estate involves a massive expansion of offshore wind power in the UK.· After the relocation of this Zone 7 site from Lyme Bay to its present position at Poole Bay, NBDL finally identified an enormous sea area of 67 square miles.Once it became government policy to promote offshore wind power, a limited number of sites were developed around the coast in Rounds 1 and 2. Later, a massive expansion was felt necessary with Round 3 implemented through allocations by the Crown Estate. Nine development zones were to generate 32 GW of power nationally and bids were accepted from the wind industry in 2010. Having consulted with various bodies, the Crown Estate then shifted the location of this particular wind farm to the east. It is understood that representations from the Ministry of Defence were material in the decision to move the site from Lyme Bay to Poole Bay. Hence, the present location planned for the wind farm was never originally identified in Round 3 by the Crown Estate.

An interactive model produced by the developers:

However, there are fears for the tourism industry: 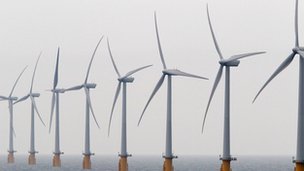 The wind farm would be located off the Dorset and Hampshire Coast
Continue reading the main storyWatch
Bournemouth council has raised fears that a £3bn offshore wind farm could deter visitors from the south coast.
Navitus Bay plans to build up to 218 turbines off Dorset and Hampshire, 12.2 miles (175 sq km) from Bournemouth.
New research suggests that may put off some tourists from visiting the Dorset coast. Borough councillor Mike Greene said that could "devastate" tourism.
Navitus Bay has said it believes there will only be a small negative impact which is "not significant".
The results are part of an assessment done for the developers in which 302 businesses and 2,027 visitors to the south coast were interviewed.
Bournemouth borough councillor Mike Greene said: "For 14% of visitors, for one in seven, they state that the presence of the project would spoil the views and prevent them from returning. When you go forward to the construction period, which we know is going to be around four-ish years, that goes up to one in three. One in three of Bournemouth's visitors say they would not come purely because of the wind farm. We are talking about a tourism industry in Bournemouth that was worth £500m a year. This will absolutely devastate it."
Navitus Bay project director Mike Unsworth said: "We have done two years of detailed, extensive surveys and the results in my mind are positive. Eighty-six per cent of the visitors surveyed don't believe the wind farm would have any impact on them visiting the area, and of the tourist businesses we surveyed 92% were very positive and encouraging about their future which is fantastic for the area and 72% of those businesses didn't think that the wind farm would have any impact." He added: "The evidence clearly does not show that tourism is impacted significantly or negatively from these offshore wind farm developments."
Mr Unsworth said the project would bring about 2,000 jobs to the region and 200 long-term jobs in operations and maintenance. Developers claim the wind farm will provide enough renewable energy to power up to 790,000 homes.

On the other hand, a recent report highlight the benefits to the tourism industry: 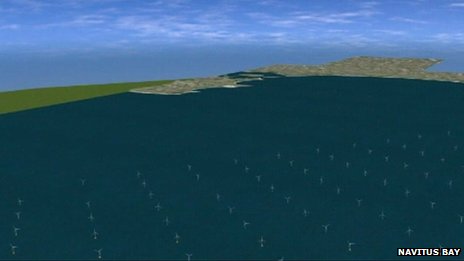 A report said the council should mention the "potential economic benefit" as well as "environmental impacts" of the scheme
Continue reading the main story
The Navitus Bay wind farm could create more than 200 jobs and contribute up to £960m to the local economy over its lifetime, a new report has said.
The gross value added (GVA) as a result of the project, off the Isle of Wight, Dorset and Hampshire coasts, could grow by between £145m and £960m up to 2047.
The Weymouth and Portland District Council report is to be considered by its planning and traffic committee.
It looks in more detail at the potential local impact of the plan.
Visual impact

The report predicted none of the manufacturing of major components, including turbines, blades and cables, would take place in Dorset and instead was likely to be made in French ports.
It predicted between 60 and 220 local jobs would be created during the wind farm's installation phase, between 2017 and 2019, under its low and medium forecasts.
This would lead to between 20 and 210 operations and maintenance jobs from 2018 to 2047 in the service sector but may include a range of skill levels, from security operatives to professional staff, it said.
However, the report did conclude Navitus Bay had "under-assessed" the effects on parts of the Dorset Area of Outstanding Natural Beauty in its own seascape and landscape visual impact assessment.
The report adds: "The council's initial statement should raise the issue of the potential economic benefit to Portland and surrounding areas of Weymouth and West Dorset; but subject to the caveat that the environmental impacts of the proposal need to be properly considered through the examination process."
BBC News - Navitus Bay offshore wind farm: Fears raised over tourism