One of the most obvious places to look at when it comes to judging the state of a town is its High Street - and there have been several studies of late:
Futures Forum: Can anyone save the High Street?

The Changing Face of the High Street: Decline and Revival

Shifts in the economic climate, retail trends and national policy through the NPPF are particularly relevant to the ongoing health and success of historic town centres, streets and spaces.

This report contributes to the growing body of good practice relating to the improvement and reinvention of our town centres and high streets as sustainable locations for shopping, leisure and business.

It is important that local authorities recognise that many high streets, and town and city centres will have to adjust to current trends and manage the reduction in the number of retail units, in conjunction with the identification of other uses to retain footfall and vitality.

National and international economic pressures, compounded by changing tastes and preferences, have had a profound effect on the traditional town centre, leading to a huge swell of vacancies and voids.

Although recent years have seen an advent of more innovative approaches to major town centre masterplanning and retail development, economic circumstances and trends have also seen an increasing emphasis on smaller-scale interventions, where strategic positioning, creative initiatives and collaborative partnerships have proven just as effective as large-scale investments and physical development projects.

There are now many examples where town centre management initiatives, Business Improvement Districts, creative management strategies, or entrepreneurial groups and individuals have played a critical role in helping town centres “turn the corner”, reverse trends or create the conditions for sustainable investment.

There is some 'vibrancy' in the town centre: Sidmouth will see a new book shop and there has been pressure put on empty premises:
Petition launched against ‘disgraceful’ Sidmouth shop - News - Sidmouth Herald
Consumer confidence up in Sidmouth - News - Sidmouth Herald
Futures Forum: Is the economy picking up in Sidmouth?
Futures Forum: District Council leader: “Sidmouth has a vibrant town centre and its community keeps a degree of excellence in maintaining it. Cranbrook should be striving to match that level of vibrancy for it to achieve all the aspirations that we have for it.”

... as suggested in figures out this week:

“Alongside increases in footfall in retail parks in every month this year, footfall has dropped in high streets and shopping centres in four of the five months since January.”

Retail footfall drops in May - BRC

SUPERMARKET giant Morrisons has declared an interest in the Alexandria Industrial Estate, say the owners of a fourth generation family firm that owns half of the site.

However, despite its possible bucking of the recent retail trend, the days for the out-of-town shopping experience might be numbered - with a report from the Guardian last year looking at the longer-term implications of our shopping habits:
Shopping centres and out-of-town retail parks hit harder than high streets | Business | theguardian.com

Whilst in the United States, the shopping mall is continuing its steady decline:

When the Woodville Mall opened, in 1969, in Northwood, Ohio, a suburb of Toledo, its developers bragged about the mall’s million square feet of enclosed space; its anchor tenants, which included Sears and J. C. Penney; and its air-conditioning—seventy-two degrees, year-round! Two years later, the Toledo Blade published a front-page article about the photo-takers and people-watchers who gathered around the mall’s marble fountain, “that gushing monument to big spending and the shopping spree.” The story quoted an anonymous businessman: “The water has a great calming effect on a person, especially when you’ve been badgered all morning.”

This week, Woodville is being torn down. So are countless other malls across the U.S.—so many that there’s a Web site devoted to “dead malls” that are out of commission. In some cases, the buildings have been converted into community colleges, corporate headquarters, or churches. Others, like the Woodville Mall, have become so damaged by water, mold, and asbestos that city officials are glad to demolish them. In January, Rick Caruso, the C.E.O. of Caruso Affiliated, one of the largest privately held American real-estate companies, stood on a stage at the Javits Center, in New York, and forecast the demise of the traditional mall. “Within ten to fifteen years, the typical U.S. mall, unless it is completely reinvented, will be a historical anachronism—a sixty-year aberration that no longer meets the public’s needs, the retailers’ needs, or the community’s needs,” he told his audience, which had gathered for the National Retail Federation’s annual convention.

Are Malls Over? : The New Yorker
The Death of the Shopping Mall in 3 Charts (O)

This is looked at with photographic detail in an article in this week's Guardian:
The death of the American mall | Cities | The Guardian


The death of the mall: readers respond

From zombie film sets and housing proposals to critiques of suburbia and capitalism, here's how our readers responded to the 'death of the shopping mall' 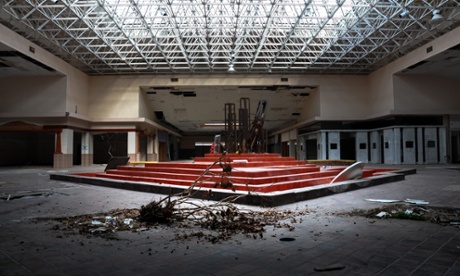 We reported on the death of the American shopping mall this week, illustrated with eerie and powerful photographs by Seph Lawless. The discussion below the line involved everything from celebrating the demise of suburbia to proposing creative ideas for reusing the vacant spaces. Here we showcase some of the best of what you said, from the silly to the serious.

We'd love to see pictures and stories of empty shops and malls in your city: share your contributions with GuardianWitness and we'll feature the best on Guardian Cities. 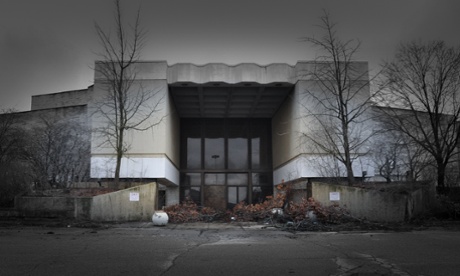 Even the "father of shopping malls" wants to disown them - but are malls one of the last few physical spaces where we come together?

Urban planning, cars, the internet - or just the natural cycle of humanity? Here's what you thought about who, and what, is to blame for the demise of the mall.

The death of the mall: readers respond | Cities | theguardian.com
.
.
.
Posted by Jeremy Woodward at 14:41