There are some very clever solutions out there to several critical 'eco-problems' of our time.

The Institute of Civil Engineering is promoting projects which can act as a template in fields as diverse as energy, water and 'sustainable infrastructure':
Futures Forum: Sidmouth recycling centre ... nominated for an ICE South West Civil Engineering Award

BT, for example, has some good ideas on how to reduce packaging and encourage reuse:

The packaging industry itself promotes the idea that plastic wrapping can help prolong the life of a food product - and can therefore reduce waste:

However, as discussed elsewhere, recycling might not be the 'solution':
Futures Forum: The plastics industry is "incredibly supportive of recycling legislation over a more long-term… reduction of disposable culture."
And other systems of manufacturing might in fact be more 'clever':
Futures Forum: The Story of Stuff: "You cannot run a linear system on a finite planet indefinitely"

Nevertheless, are there not technological ways out of these dilemmas?

This has to some extent been discussed, showing that innovation can clearly bring benefits:
Futures Forum: Climate Change solutions: "Revealing greater agreement than the pro-growth versus de-growth dichotomy suggests."

But do solutions have to be so often 'over-engineered'?

Wind-energy does not have to be on a massive scale:

Futures Forum: The aesthetics of development: power plants and windfarms

... but can be on a much more 'human-scale' at a fraction of the cost and at the behest of the user: 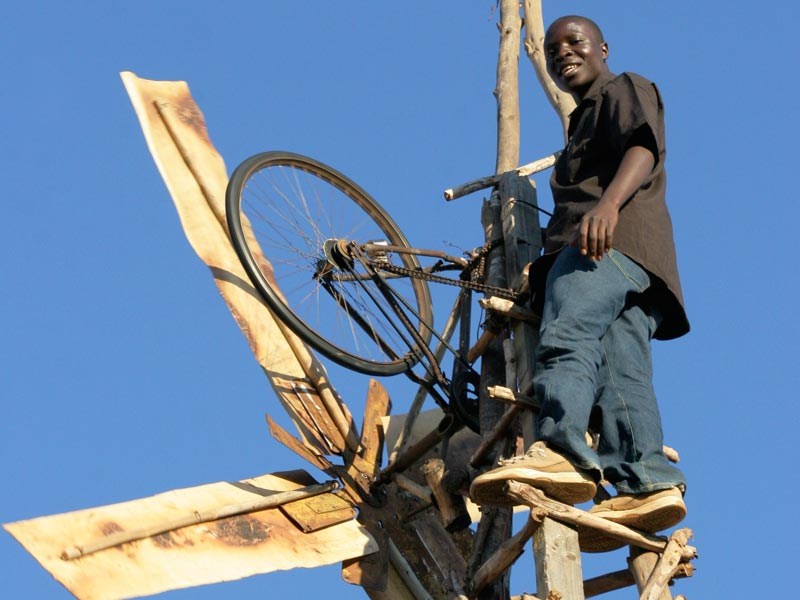 It seems, then, that we do not need to reinvent the wheel...


Design For the Real World - Victor Papanek. A review… Flow chart by Victor Papanek illustrating the social and moral responsibility of the designer and his/her position in a profit-oriented society. From Design for the Real World, 1973.
Victor Papanek’s “Design for the Real World; human ecology and social change” from way back in 1973.
Victor Papanek was both a designer and educator who was a strong advocate of socially and ecologically responsible design. He was critical of the industrial design profession for producing shallow work that wasted natural resources, aggravated the environmental crisis and ignored social and moral responsibilities. The book illustrates the designer’s responsibility and potential to affect real change in the world through design. Papanek developed a reputation with his controversial perspectives that carried on through future writings. The book has been translated in over 20 languages and according to Papanek was the most widely read book on design in the world. It serves as an excellent introduction to socially responsible and ethical design and is the backbone of many philosophies and practices in design today.
INTELLECTIVEDESIGN • Design For the Real World - Victor Papanek. A review...


An Early Champion of Good Sense

NEW YORK — How would you feel if you had written a book, which was, in your own words, “derided, made fun of, or savagely attacked” by your peers? Or you were forced to resign from a professional body, which then threatened to boycott an exhibition at the Centre Pompidou in Paris if your work was included?

All of these slights — and more — were heaped upon the designer Victor Papanek after the publication of his 1971 book “Design for the Real World.” Why? There’s a clue in the opening line, “There are professions more harmful than industrial design, but only a few.” Papanek went in to accuse his fellow designers of producing shoddy, stylized work that wasted natural resources, aggravated the environmental crisis and ignored their social and moral responsibilities. Ouch! Four years later he was described by Design magazine as being “disliked, even loathed by his contemporaries.”

Yet Papanek had the last laugh. In 1985 in his preface to the second edition of “Design for the Real World,” he noted proudly that the first edition had been translated into more than 20 languages and had become “the most widely read book on design in the world.” He died in 1998, but 40 years after his book was first published, it is still in print and hugely influential, and Papanek is praised as a pioneer of sustainable and humanitarian design. As Zoë Ryan, the chairwoman of design and architecture at the Art Institute of Chicago, put it, “His approach seems more relevant than ever in today’s challenging times.”

Papanek wasn’t the first designer to advocate a sustainable, inclusive approach to design — R. Buckminster Fuller did so in the 1920s — but his vision was unusually coherent. His successors have faced the tougher, and generally duller task of explaining the logistics of implementation. Mr. McDonough and the German chemist Michael Braungart rose to the challenge in their 2002 book “Cradle to Cradle,” but it is a rare success, and “Design for the Real World” still shines as an inspiration for young designers.

Cradle to Cradle. Remaking the Way We Make Things

'Reduce, reuse, recycle' urge environmentalists; in other words, do more with less in order to minimize damage. But as architect William McDonough and chemist Michael Braungart point out in this provocative, visionary book, this approach only perpetuates the one-way, 'cradle to grave' manufacturing model, dating to the Industrial Revolution, that creates such fantastic amounts of waste and pollution in the first place. Why not challenge the belief that human industry must damage the natural world? In fact, why not take nature itself as our model for making things? A tree produces thousands of blossoms in order to create another tree, yet we consider its abundance not wasteful but safe, beautiful and highly effective.

Guided by this principle, McDonough and Braungart explain how products can be designed from the outset so that, after their useful lives, they will provide nourishment for something new - continually circulating as pure and viable materials within a 'cradle to cradle' model. Drawing on their experience in redesigning everything from carpeting to corporate campuses, McDonough and Braungart make an exciting and viable case for putting eco-effectiveness into practice, and show how anyone involved in making anything can begin to do so as well.

Techno-Fix: Why Technology Won't Save Us Or the Environment

Techno-Fix questions a primary paradigm of our age: that advanced technology will extricate us from an ever increasing load of social, environmental, and economic ills. Techno-Fix shows why negative unintended consequences of science and technology are inherently unavoidable and unpredictable, why counter-technologies, techno-fixes, and efficiency improvements do not offer lasting solutions, and why modern technology, in the presence of continued economic growth, does not promote sustainability but instead hastens collapse.

The authors of Techno-Fix are inside observers of the technological scene. Educated and experienced in science and engineering, the authors deliver a highly readable, insightful and powerful critique of modern technology.

The readers of Techno-Fix will learn a number of inconvenient truths about science and technology, topics that are rarely, if ever, covered in the media or discussed among professionals. Readers will be challenged to re-examine their current worldview, their paradigms and assumptions about the so-called promises of modern technology. But they will also feel empowered and inspired by the fact that most problems confronting humanity have inherently simple, low-tech solutions.

Techno-Fix: Why Technology Won't Save Us Or the Environment: Michael Huesemann, Joyce Huesemann: 9780865717046: Amazon.com: Books
New Technology and Society: Techno-Fix Book Content
What Is Sustainable: Techno-Fix

All these ideas were being developed at the same time as Papenak in the 1970s - by Ivan Illich:

In this new work Illich generalized the themes that he had previously applied to the field of education: the institutionalization of specialized knowledge, the dominant role of technocratic elites in industrial society, and the need to develop new instruments for the reconquest of practical knowledge by the average citizen.

He wrote that "[e]lite professional groups . . . have come to exert a 'radical monopoly' on such basic human activities as health, agriculture, home-building, and learning, leading to a 'war on subsistence' that robs peasant societies of their vital skills and know-how. The result of much economic development is very often not human flourishing but 'modernized poverty,' dependency, and an out-of-control system in which the humans become worn-down mechanical parts."[2]

Illich proposed that we should "invert the present deep structure of tools" in order to "give people tools that guarantee their right to work with independent efficiency."[14]

Tools for Conviviality attracted worldwide attention. A resume of it was published by French social philosopher André Gorz in Les Temps Modernes, under the title "Freeing the Future."[15] The book's vision of tools that would be developed and maintained by a community of users had a significant influence on the first developers of the personal computer, notably Lee Felsenstein.[16].


With Tools for Conviviality (1973), Illich extended his analysis of education to a broader critique of the technologies of Western capitalism. The major inflection point in the history of technology, he asserts, is when, in the life of each tool or system, the means overtake the ends. "Tools can rule men sooner than they expect; the plow makes man the lord of the garden but also the refugee from the dust bowl." Often this effect is accompanied by the rise in power of a managerial class of experts; Illich saw technocracy as a step toward fascism. Tools for Conviviality points out the ways in which a helpful tool can evolve into a destructive one, and offers suggestions for how communities can escape the trap.

So what makes a tool "convivial?" For Illich, "tools foster conviviality to the extent to which they can be easily used, by anybody, as often or as seldom as desired, for the accomplishment of a purpose chosen by the user." That is, convivial technologies are accessible, flexible, and noncoercive. Many tools are neutral, but some promote conviviality and some choke it off.

Indeed, Illich was very critical of our industrial society:

This text was first published in Le Monde in early 1973. Over lunch in Paris the venerable editor of that daily, as he accepted my manuscript, recommended just one change. He felt that a term as little known and as technical as “energy crisis” had no place in the opening sentence of an article that he would be running on page 1.
As I now reread the text, I am struck by the speed with which language and issues have shifted in less than five years.
But I am equally struck by the slow yet steady pace at which the radical alternative to industrial society—namely, low-energy, convivial modernity—has gained defenders.
In this essay I argue that under some circumstances, a technology incorporates the values of the society for which it was invented to such a degree that these values become dominant in every society which applies that technology.

Ivan Illich - Energy and Equity
Center for a Stateless Society » Our Bodies, Their Subsidies
.
.
.
Posted by Jeremy Woodward at 14:26