Looking to the future of the South West seaside town

There has been quite a lot of interest in the present and future state of the seaside town.

There are some questions posed by the Yorkshire Post recently:
Is it time the Great British seaside had a makeover? - Yorkshire Post

There is the threat of the chain stores spoiling the character of these 'quintessentially English seaside resorts':
First Costa, now Waterstones could be final straw for sleepy Southwold - Home News - UK - The Independent

There is the fear that the seaside town is being left behind:

Sun, sand and inequality: why the British seaside towns are losing out

Holiday resorts - and not inner cities - were identified last week as centres of low ambition and limited opportunity. Beyond the beach, Weymouth is a place beset by low wages, lack of transport, isolation and poverty of aspiration 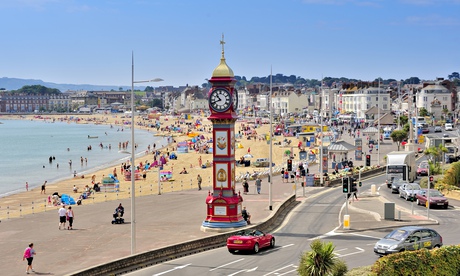 Weymouth Pleasure beach. 'My advice to young people would be go east, get out,' says one local campaigner. Photograph: John Snelling/Getty Images

On a sunny June day, Weymouth's esplanade is in full British seaside resort swing. Two hot donkeys sashay along the beach carrying their small, squealing passengers, and there is a long queue outside Rossi's ice cream parlour. A "wonderful place – wonderful – a great salt sheening sea bending into the land like a bow", wrote Thomas Hardy, who lived here.

The townhouse hotels and B&Bs on the faded Georgian seafront are doing a decent trade and the harbour is picturesque with its boats and bars. But immediately behind the seafront the gift shops and cafes are interspersed with betting and pawn shops and overhung with To Let signs. Deeper into the town and the Littlemoor housing estate is among the most deprived in Europe, directly butted up against the more affluent Preston.

Office for National Statistics figures released on Friday show schoolchildren in coastal towns falling dramatically behind their counterparts in the inner cities in terms of GCSE results, echoing the comments last week by the chief inspector of schools, Sir Michael Wilshaw, that aspiration and achievement was now a major issue in seaside towns.

Equality watchdogs including Alan Milburn's Social Mobility and Child Poverty Commission are also issuing dire warnings that a lack of immigration and investment, as well as the growing wealth gap and the dominance of London as an economic hub, are creating a crisis.

Weymouth's mounting problems are replicated around the country's coastline, from Cornwall to Norfolk and beyond, where often affluent facades mask poverty and stagnation.

"Enter this part of Dorset and you leave the 21st century behind. If you are interested in culture or remotely artistic, this is a wasteland," says Charlotte Storey, former actress and teacher, who runs Aspire, a successful small charity helping young people find their way into further education and employment.

"It's a generation behind. A prison of passion, a graveyard of ambition. My advice to young people would be go east, get out. People think 'oh, wealthy Dorset', and parts of it are, but behind that, behind the honey-coloured cottages that are the second homes of the Londoners, there is mass deprivation.

Sun, sand and inequality: why the British seaside towns are losing out | Society | The Observer

But there is some fighting back, with several MPs from coastal constituencies campaigning for help towards the tourism trade:


MPs back drive to cut VAT to create tourism jobs

MPS from South Devon have joined politicians and businesses from coastal constituencies up and down the UK in a bid to drive up investment and tourism by cutting VAT for the sector.

Totnes MP Sarah Wollaston and Torbay MP Adrian Sanders have backed the Cut Tourism VAT campaign, along with 60 other MPs from around the UK, over half of which are from coastal constituencies.

The MPs wants to encourage more domestic visitors to Devon, and to make British tourism more competitive with Europe, where many countries pay as little as five per cent VAT on accommodation and attractions.

Research has shown reducing the rate, which is allowed under EU law, would allow lower prices and increased investment into attractions and accommodation, which would boost jobs and attract more tourists.

Numerous local and national businesses have also backed the campaign and they want to see growing support from Westminster for policies which will add to regional economies, and allow them to compete on a level playing field with Europe. In Totnes, the sector accounts for 14 per cent of jobs, and this rises to 16.4 per cent in Torbay — making it the constituency's single largest employer.

A VAT cut would allow operators to lower prices, invest more in facilities, and increase the number of employees — attracting more visitors.

Tourism nationally employs 3.1 million, with more than 75 per cent employed outside of London. Many of these are young workers who have been hit disproportionately hard by the recession.

Graham Wason, chairman of the CUT Tourism VAT campaign, said: "This is a crucial issue for Devon and many similar parts of the country. It's no coincidence being an island makes ours a very tourist-focused economy which is why we need to overcome the startling anti-competitive stance we have at the moment with such high levels of VAT relative to other EU states."

Dr Wollaston said: "What we need at the moment is help. We offer a fantastic range of opportunities for people who want to come to visit and I hope people will visit, but those businesses are struggling. It is not just competition across national boundaries which makes a difference; it is competition within the tourism sector. We need a level playing field."

Mr Sanders said: "We have seen Ireland, France and many other countries successfully use VAT reductions as a stimulus for tourism. There is no doubt but that such a reduction would help areas, especially coastal towns, which have particularly weak local economies. South West England has a great deal to offer, but when it is cheaper to visit just about any other country in Europe, how can we even start being the most competitive in the global race?"

And, actually, there's a lot to attract the visitor to the South West: it is such a magical place:
Is Cornwall really a foreign country? - Telegraph
.
.
.
Posted by Jeremy Woodward at 15:36