Busway or railway or cycleway? 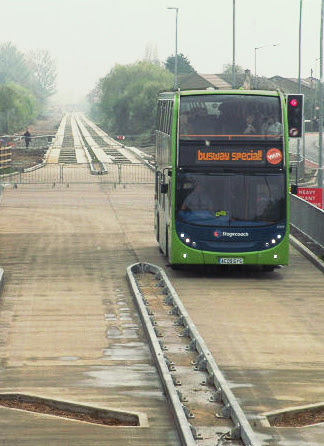 The Cambridgeshire Guided Busway (also Cambridge-Huntingdon Rapid Transit Scheme, locallythe busway or the guided bus) connects Cambridge, Huntingdon and St Ives in the English county ofCambridgeshire. It is the longest guided busway in the world,[1][2] overtaking the O-Bahn Busway in Adelaide, South Australia.[3][4][5]
Two guided sections make up 16 miles (25 km) of the route. The northern section, which uses the course of the Cambridge and Huntingdon railway, runs through the former stations of Oakington, Long Stanton andHiston. The southern section, which uses part of the former Varsity Line to Oxford links Cambridge railway station, Addenbrooke's Hospital and the park and ride site at Trumpington, via housing on the Clay Farmsite.
Services are operated by Stagecoach in Huntingdonshire and Whippet Coaches, which have exclusive use of the route for five years in exchange for providing a minimum service frequency between 07:00 and 19:00 each week day.[6] Specially adapted buses are used—on the busway the bus driver does not need to hold the steering wheel on the guided sections. A total of 2,500,000 trips were made in the first year of operation.
Cambridgeshire Guided Busway - Wikipedia, the free encyclopedia

But it's met with some opposition - from those preferring the old railway instead:


Cambridgeshire's Guided Busway finally opened on the the announced opening day, August 7th 2011.
It is built on the former track bed of the Cambridge-St Ives railway that principal objector CAST.IRON wanted to reinstate.
The record breaking, budget-busting busway has generated vigorous disagreement between the proponent Cambridgeshire County Counciland numerous objectors.
Buses are finally running, but council tax payers have been taken for one hell of a ride for years.
The build cost is hugely over-budget, and a protracted legal fight is imminent between Council and contractor BAM Nuttall.
This website is an archive of the media coverage from 2003 to the present, with our own take on the events.

However, elsewhere, the system is seen as good for 'clean air' - as opposed to sitting in traffic in Jakarta, Indonesia:
Delay of additional busway routes criticized | Clean Air Initiative

And the questions have been asked about how 'eco-friendly' such services could be:
Will busway be eco-friendly? (From Leigh Journal)
.
.
.
Posted by Jeremy Woodward at 15:31