East Devon District Council proposes "to trial a change to the current public speaking arrangements and implement steps to reduce the length of planning committee meetings."

Back in December, the District Council rejected proposals to reduce the amount of time given to the public to speak at planning meetings:
http://www.claire-wright.org/index.php/post/councillors_throw_out_plans_to_restrict_public_speaking

However, the Council seems to be having second thoughts and has opened up the can of worms once again. According to a new report , it wants to "to trial a change to the current public speaking arrangements and implement steps to reduce the length of Development Management Committee meetings."
http://www.eastdevon.gov.uk/dmc_010314_wg_report_public_speaking_and_agenda_management.pdf

Whilst the document compares how other Councils manage their planning meetings, it's startling to see that East Devon has to deal with more than DOUBLE the amount of planning applications other districts have to.
This is their comment, on page 8: 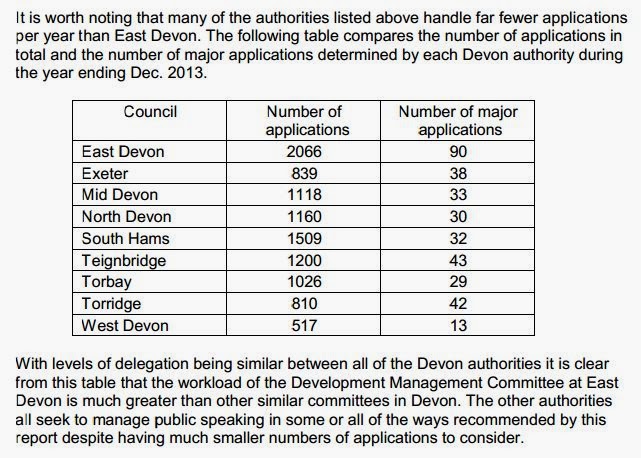 An alternative analysis of these figures might come up with a different set of questions:
> Why are there so many planning applications being made in this District - compared to others?
> If there are so many, why not double the number of planning committee meetings to accommodate the number of applications?
> Why does the work-load necessitate 'reducing' the amount of time available for comment in public?

However, following on from questions about 'how to access decision-making'
Futures Forum: "What is lobbying?"... "Openness and transparency is vital."

... and within the context of such controversial 'last-minute' planning applications
Outrage at plans for 1,200 houses on green wedge on outskirts of Exeter at Old Park Farm, Pinn Hill, between Pinhoe and the village of Westclyst | Exeter Express and Echo
“You have given permission for 1,200 homes” DMC Chair told | East Devon Alliance

... there are fears that these proposals will simply mean there will be fewer opportunities for members of the public to voice concern:

Wednesday, 26 March 2014 5 Comments by Claire
At a time when East Devon is more under pressure than ever from major planning applications in the open countryside, a working group of councillors have proposed to dramatically reduce public speaking rights at planning committee meetings.

In a paper that has just appeared on EDDC’s website, the proposed new public speaking regime will be debated at the development management (planning committee) meeting next Tuesday (1 April).
The paper from the working group, which was chaired by Cllr Ray Bloxham, insists its proposals will bring it in line with other local authorities and are to counter:
- very long meetings- public repetition- the many planning applications to be considered now and in the future.
The new rules would mean pre-registration of speakers and impose strict limits on the numbers of people allowed to address the planning committee.
And I believe that the new proposals hand a clear advantage - even more than already offered by a pro-development planning system - to the applicant, by offering them a time slot of their own, in addition to the slots available for supporters of the application.
Rushed throughThere also appears to be an attempt to rush through the new public speaking arrangements in time for May’s full council meeting, although it is unclear why this is necessary. The paper states that the new rules “should ideally be brought in for the new civic year.”
The clampdown is proposed for a one year trial. The detailed proposals include:
- Introduction of pre-registration of all public speakers (meaning those who have submitted a written comment only) three working days before the meeting
- Minor applications: The speakers entitled to address the planning committee are: a parish or town council representative, two objectors, two supporters, PLUS the applicant or agent
- Major applications: The speakers entitled to address the planning committee are: a parish or town council representative, five objections, five supporters, PLUS the applicant or agent.
Fortunately, the ward member is listed as being to be allowed to speak.
NB. The threshold for a major planning application is 10 houses, and one hectare of land for non-housing applications.
Registration proposalsSpeakers will be registered on first come, first served basis. Registered speakers will be advised that their contact details will be posted on the council’s website to allow others, who may have wished to speak, to contact them.
But if speakers only register three days ahead, after which their details are posted on the website (is this what they would want in any case?) how can they get together with other speakers that they don’t know, in time to collectively form their argument?
And what about those who are not online?  How would they know who to contact and by when?
Agenda order Planning applications would be numerically ordered on the published agenda, with a revised order to be published by 12 noon the day before the meeting prioritising applications on which people have registered to speak.
All items where there are registered public speakers to be taken before items where there are no registered public speakers. Where there are registered speakers for major applications these be taken first.The (paltry) sweeteners - Non-committee members are allowed to speak on Part A non-planning application items, limited to three minutes per contribution. - A maximum of two public speakers (to register three working days in advance of the meeting) to be permitted on non-planning application items on which DMC is making a decision (this does not include items where a recommendation will be made to council, items for information or items responding to government guidance). To be made clear on the agenda the items on which the public can register to speak. Adjacent ward member restriction- In respect of planning applications, to hear from adjacent ward members or other non-committee members if there is time and subject to chairman’s discretion.
I have addressed the committee on a couple of occasions as an adjacent ward member and have not been restricted or prevented from doing so. Now adjacent ward members (who rarely speak in any case) may be prevented from doing so.
The authors of the paper insist, that even with the new restrictions, public speaking arrangements are generous!
EDDC receives more than twice the number of major planning applications compared with other local authoritiesThe justification to cut public speaking rights because EDDC receives a significant number of major planning applications is puzzling. See table on page 8, where it emerges that EDDC receives more than twice the number of major planning applications than any other Devon council.
This piece of information is particularly baffling, given that EDDC is not alone in Devon for not having an adequate housing supply or up-to-date local plan.
If anything the high level of planning applications should be a very good reason for retaining the existing public speaking rules, not increasing anxiety, confusion and bureaucracy by introducing complicated and very restrictive new arrangements.
Unfortunately the report does not appear to have considered the planning committee members themselves nor ward members (some of whom appear to be allowed to speak for AGES – far longer than the requisite five minutes) and the ability to make concise points and hold an effective debate without waffle and repetition.
No public consultation proposed on public speaking restrictionsThe new arrangements are so draconian at a time when communities are under such pressure from development and are experiencing much anxiety as a result, that I can scarcely believe what I read in the paper.
The proposed new system must surely be subject to a proper period of public consultation.
Myself and fellow independents will be taking this further.
The development management committee meeting on Tuesday 1 April, where these public speaking restrictions will be debated, starts at 9.30am.
To end on a final note of irony, members of the public will not be entitled to comment on the paper at the meeting, which you can view here - http://www.eastdevon.gov.uk/dmc_010314_wg_report_public_speaking_and_agenda_management.pdf
Photograph: Protesters march on the Knowle in November 2012. One of the reasons for marching was that EDDC does not listen to local people’s views.
http://www.claire-wright.org/index.php/post/eddc_set_to_clamp_down_hard_on_public_speaking_at_planning_committee_meetin