This has now been rejected by the Town Council's planning committee:

A generic image of a solar farm

Stefan GordonFriday, March 21, 2014
FEARS over flooding, an impact on the protected landscape and even for ancient burial sites have seen civic leaders take a dim view of plans for a 30-acre solar farm outside Sidbury.

Energy firm Lumicity has submitted proposals for an array with 28,800 panels on East Hill Strips to the northwest of the village.
Sidmouth Town Council’s planning committee has objected to the application.
Members said the solar farm will create a ‘significant and detrimental visual impact’ on countryside situated in the Area of Outstanding Natural Beauty (AONB). “This in turn would be likely to impact the vital tourist industry in the area,” ruled the committee.
Concerns were also expressed about the loss of viable agricultural land and that the development could lead to harm to wildlife. Councillors also said it was understood that there are ancient burial sites in the area and an archaeological survey should be carried out to confirm this.
Run-off of rainfall on the array could create flooding on surrounding hills and fields, added members during a meeting last Wednesday. They suggested a ‘more suitable site’ should be found and that there was not ‘sufficient’ justification to allow development in the ‘exceptional’ AONB.
The proposed solar farm would provide enough clean energy to power approximately 1,680 homes and save around 31,000 tonnes of CO2 each year.
The current application is the second attempt by Lumicity to secure planning permission. Blueprints for a 50-acre facility were rejected by the district council in December over concerns the installation would have on the landscape, the loss of agricultural land and potential flooding.
East Devon District Council (EDDC) will decide the fate of proposals.
Solar farm’s ‘risk to ancient burial sites’ - News - Sidmouth Herald

Lumicity has stressed the 'community benefit':
Community Benefits | Lumicity Ltd
but the planning committee have not been sufficiently impressed: 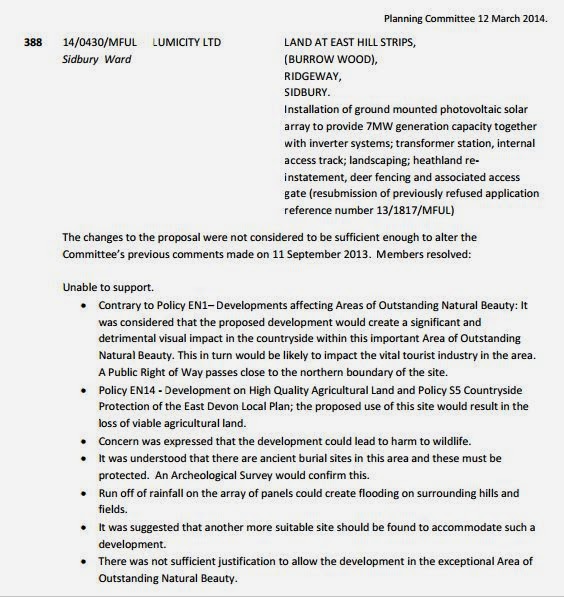