What to do about car emissions: from Paris to London...

Earlier in the week, Paris was beset by heavy air pollution:

Paris Gets a Taste of Beijing-Style Smog

The Eiffel Tower, is barely seen through the smog from Paris, Friday, March 14, 2014. Air pollution that has turned Paris skies a murky yellow. Nearly three-quarters of France is under alert in what the European Environment Agency says is the worst air pollution since 2007. Image: Jacques Brinon/Associated Press

Paris, along with several other cities in northern France, is in the midst of a multi-day air pollution crisis, with pollutants hovering at dangerous levels.

A persistent area of high pressure is causing the smog — it is effectively putting a lid on the atmosphere over Paris and northern France, promoting sinking air and light winds. Such conditions have trapped pollutants at low altitude, cloaking Paris' elegant city scape in a milky haze. The pollution is a risk to human health, since certain forms of atmospheric particles can seep into the lungs and cause a variety of health hazards, particularly among the young, elderly, and others with compromised immune systems.

Paris Gets a Taste of Beijing-Style Smog

Whilst some Parisians blame it all on Germany's decision to drop nuclear power
Luftverschmutzung : Franzosen geben Deutschland Schuld am Smog in Paris - Nachrichten Wirtschaft - DIE WELT

However, many of the measures have been proven to be counter-productive:

Car bans such as the one earlier this week in Paris can even make air pollution worse in the long term, analysis shows 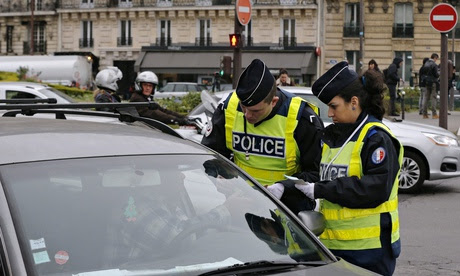 Police officers were out in force in Paris on Monday to ensure only cars with plates ending in odd numbers were on the streets. Photograph: Francois Guillot/AFP/Getty

Licence-plate driving bans such as the one implemented in Paris this week are not the solution to urban air pollution, according to analysis of recent data. In fact, arbitrary restrictions have been shown to make air pollution worse in the long term.

Long-running licence plate schemes operate in many cities, including Athens, Beijing and Mexico City. Some ban cars every second day, others once a week. But drivers inevitably circumvent restrictions by buying cheap, inefficient cars with opposing number plates according to Lucy Sadler, who runs the Low Emission Zones in Europe website. This means some schemes have had an adverse effect on air quality.

"Certainly, in terms of comparison between low emission zones and odd-and-even number plate schemes, it's a no-brainer," Sadler said. "There is lots of good evidence saying low emission zones have a good impact on air quality and health. That's robust and well researched."

"As the [licence plate] traffic restriction can also affect cleaner vehicles, there is no incentive for motorists to invest in cleaner cars with particle filters or catalysts," said Martin Lutz, from Berlin's Department for Urban Development and Environment. 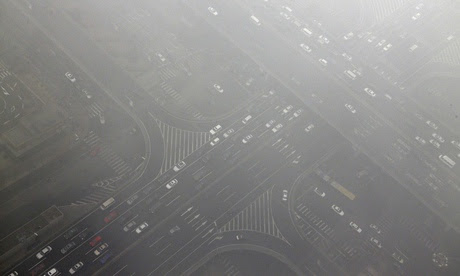 Lutz agreed that low emission zones (LEZs) , hundreds of which now operate in Europe since Stockholm implemented the first in 1996, are a more effective way of decreasing the contribution of traffic to air pollution. LEZs ban inefficient vehicles from city centres, forcing drivers to upgrade their cars.

On Monday, the French government reacted to dangerous levels of pollution by requiring cars with licence plates ending with an even number to stay off the road. Nearly 4,000 fines of €22 were issued to drivers who flaunted the restriction. It was the second time Paris had implemented a short-term ban in response to high smog levels; the city's air quality authority, Airparif, says such measures are effective in combating pollution emergencies.

But Ben Barratt, from King's College London, said the effect of short-term actions is difficult to assess. "The weather changes all the time, the emissions change all the time and trying to pin down whether a particular emergency scheme works or not is hard."

Short-term schemes also cause mass disruption and dissatisfaction, Sadler added. "The impact to society and to vehicle operators is horrendous. Suddenly, tomorrow, you're not allowed to move." 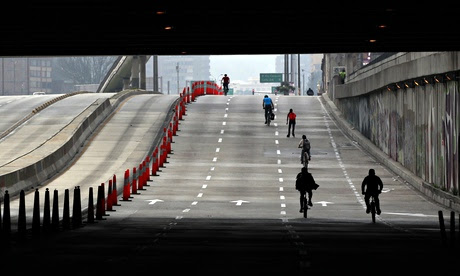 Residents get on their bikes during a car-free day in Bogotá, Colombia. Photograph: Fernando Vergara/AP

Research on the impact of licence plate-based schemes is rare, but an analysis of existing data shows a mixed set of results. Conversely, LEZs and congestion charges, which encourage drivers to use public transport and shift to more efficient cars, are proven to reduce concentrations of dangerous particles and chemicals which cause more than 1.3 million premature deaths in cities every year.

Asked if it was fair to place the burden on drivers, particularly low-income drivers, Sadler said those who earned less tended to use public transport, and the responsibility for the pollution created by cars should ultimately rest on the person at the wheel. "If somebody's polluting, why should society subsidise that? In air pollution, the polluter pays in principle."

But according to Barratt, LEZs should be used alongside inner-city congestion charges, as they are in London: "You have to take the vehicles off the road, rather than just try and make them cleaner. So something like congestion charging, where you've got a marked decrease in the number of vehicles on the road, is preferable to something where you've got the same number of vehicles, [even if] those are cleaner." 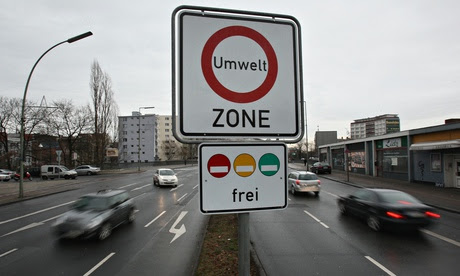 A sign marks the start of Berlin's LEZ, which bans all petrol and diesel vehicles without a closed loop catalytic converter. Photograph: Sean Gallup/Getty Images

The Hoy No Circula ('today it doesn't circulate') was introduced by Mexico City in 1989 to combat rampant air pollution. The city bans cars for one day per week, depending on the last number of their number plate. On Mondays five and six don't drive, on Tuesdays it's seven and eight, and so on. The programme was initially successful in bringing down pollution levels, with carbon monoxide (CO) dropping by 11%. But residents began buying second cars (often old inefficient ones) to get around the ban. The long-term impact of the scheme on CO levels has been a 13% rise.

Bogotá's Pico y Placa ('peak and plate') banned cars from driving during the peak traffic hour, two days per week. The Colombians sought to improve on the Mexican model by switching the combinations of days and numbers every year, making it harder to circumvent by buying another car. The policy has failed to deliver clear benefits in air pollution. Restrictions have been tightened periodically, with some of the changes leading to reductions in CO and airborne particles. But one study found most of the major pollutant concentrations were worse because drivers were driving in off-peak hours and driving more to get around the measures.

During the 2008 Olympic Games, Beijing banned cars on the basis of odd and even numbers, similar to the French ban this week. In conjunction with some fortuitous rain and the shutting down of the factories and industries that cause much of Beijing's pollution, the ban drove airborne particulate matter concentrations during the Olympics down by 20%. After the Games, the Beijing authorities kept a one-day a week ban in place. But this, like other long-term licence plate bans, has had a limited effect on air pollution and encouraged drivers to buy second cars.

A £5 congestion charge to drive on London's innermost streets was implemented in 2003. Studies showed emissions of dangerous pollutants – NO, NO2 and small particulate matter (PM10) – were reduced by 12%. The charge is now £10.

In 2008, Transport for London introduced an LEZ, which governs the efficiency of lorries, buses and coaches for the whole of Greater London. The zone led to a fall of 20% in tiny particulate matter (PM2.5) but had no discernable impact on PM10 or NO2. Critics say London's LEZ needs to include private vehicles if it is to be effective.

Implemented in 2008, Berlin's LEZ bans all diesel vehicles and petrol vehicles without a closed loop catalytic converter. The effect on levels of diesel pollution, which is a known carcinogen , has been dramatic. Concentrations of diesel particulates have dropped by 14-22%. PM10 concentrations near main roads are down 3% and the number of days when the city's air pollution exceeds European standards has fallen by four to 24 days per year.

Does Paris have worse air pollution than Beijing?

On Friday, levels of pollution in Paris were higher than in many of the world's most notoriously polluted cities. With your help,Karl Mathiesen, investigates how the City of Light became the City of Smog

Parisians driven to revolt by car ban in fight against pollution

ENGLAND was yesterday hit by smog twice as bad as that in polluted Beijing, figures reveal.

The UK's Pollution Is So Bad, the EU's Taking Legal Action

The European Commission is taking legal action against the UK over the country’s excessive air pollution. It’s the first case to be brought against an EU member state for missing a deadline to cut levels of the toxic gas nitrogen dioxide, which was already extended by five years.

In a statement released today, the Commission announced that it had sent a letter of formal notice to the UK, which has two months to respond. The Telegraph reports that failure to reduce levels of fumes and work with the Commission “could result in fines of hundreds of millions”—presumably, if the case were to be taken to the European Court of Justice and found in breach of the directive.

Nitrogen dioxide is a toxic gas that’s chugged out into the atmosphere mainly by traffic and industry. As well as being a cause of acid rain, the EU says it’s “the main pre-cursor for ground-level ozone causing major respiratory problems and leading to premature death,” which is why it sets hourly and annual limits for how much of the gas should be allowed in its member countries’ air.

Initially, those limits were supposed to be met by 2010, but some countries were allowed an extended deadline of 2015 on the basis that they had a “credible and workable plan” to reach the standards by then. A year away from that extension, and the Commission writes that “the UK has not presented any such plan for the zones in question.”

The zones mentioned are the 16 areas recognised as the worst for exceeding air pollution across the country. They are: Greater London, the West Midlands, Greater Manchester, West Yorkshire, Teesside, the Potteries, Hull, Southampton, Glasgow, the East, the South East, the East Midlands, Merseyside, Yorkshire & Humberside, the West Midlands, and the North East. For anyone lacking a good grasp of British Geography, that accounts for huge swathes of the country and particularly the large urban areas. There are 43 “zones” in total for the purpose of monitoring air pollution.

This kind of pollution can be reduced by simple steps like planting trees and making busy roads low-emission zones, or more futuristic solutions like smog-eating buildings—but you don't see many of those amidst British rush hour traffic jams.

The UK's Pollution Is So Bad, the EU's Taking Legal Action | Motherboard.
.
.
Posted by Jeremy Woodward at 13:49

Well, car plates are necessary for the cars that can connection between the government. This is one of the precious information.
Carplates