"Build half a million more homes" ... but to what extent are really 'innovative schemes' being sought and introduced by local authorities to provide affordable housing?

There is a lot of pressure to build - and conflicting legal opinions on what it means:
Futures Forum: The pressures to build on green fields: in the Southwest - "The lack of a local plan for meeting housing targets does not necessarily undermine the protection that our countryside merits."

The Local Government Association has released its 'plan' outlining what a future government as of next May should be doing on the vital issues of housing, employment and health:

THE FIRST 100 DAYS AND BEYOND

In May 2015 the country will have a new government which will determine the future of our nation not just until the end of the decade but also for future generations.

This new government will be faced with a number of difficult issues. At the top of the in-tray will be the ‘must do’ tasks it will have to tackle.
Our offer, to whoever forms that government, is to help them deal with the issues that matter most to the people of this country, changing lives for the better and investing in the future of our nation.

More detail on what the new government will need to do – in its first 100 days – to secure a bright future for the people of this country can be found in our document, available here:

Its first 'pledge' is to 'build half a million more homes':


HELPING EVERYONE FIND HOMES AT AN AFFORDABLE PRICE

The shortage of houses in this country is a top priority for people and buying a home is increasingly out of reach for many. Over the last two Parliaments, the number of people under 45 who can afford their own home has fallen by a fifth. More than three million adults aged 20-34 are now living with their parents; house prices are rising faster than average earnings and there are 1.7 million households on waiting lists for affordable homes across England.

Councils are ambitious for their communities and the people who live in them. They want to build more local, affordable homes but currently they are restricted in their ability to do so. Councils have demonstrated that when they are given the powers, resources and flexibilities they can build at scale. Councils are focused on making the best use of land that is available and appropriate for housing including prioritising the use of brownfield land through their local plans where this makes sense locally.

OUR PLANS WOULD PROVIDE HALF A MILLION MORE HOMES SO PEOPLE CAN FIND A PLACE THEY CAN AFFORD.

And their website allows closer analysis at local level: 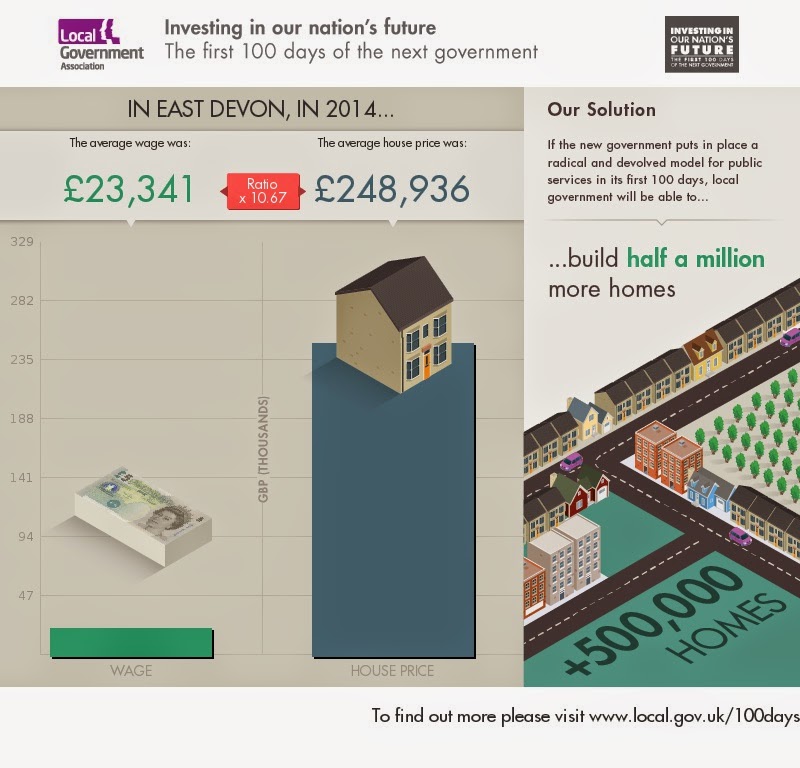 However, there are questions:

> To what extent does the LGA have its own 'perspective' on these matters?

The Local Government Association LGA), which represents more than 370 councils in England and Wales, wants a raft of new measures to help tackle the housing crisis head-on – staving off an ever-swelling swathe of householders priced out from getting on the housing ladder.

The call comes after government figures show that 221,000 new homes are needed every year. Yet currently, based on last year's figures, only half that amount is being built.

> To what extent will the lack of a Five-Year Housing Plan mean councils are in fact powerless?

"the CLG 2008-based household projection figures constitute the most reliable up-to-date figures, and therefore the best evidence on which to base my assessment of Torbay's housing supply position."

With the acceptance of these figures through appeal, it means that a higher number of houses (than those desired by the council) in line with the 2008-based figure can now legitimately be provided by developers, until the council's supply figures are next tested and a new Local Plan is adopted.

Local planning | PAS
5 year land supply for dummies | East Devon Alliance
Futures Forum: The pressures to build on green fields: in the Southwest - "The lack of a local plan for meeting housing targets does not necessarily undermine the protection that our countryside merits."

> To what extent are really 'innovative schemes' being sought and introduced by local authorities?

After World War II, white, middle-class Americans flocked to the suburbs from the city. This shift was described by Alan Ehrenhalt in his 2013 book, The Great Inversion. The result is that the diverse communities that make cities resilient creative centers are being displaced or forced to find new, affordable housing options.

Here, we’ve rounded up 11 affordable housing alternatives for city dwellers because if we want cities to thrive, we need to rethink how we house everybody, not just the rich.

Also called mother-in-law suites, accessory dwelling units (ADUs) are secondary units that exist on property that would normally have only one dwelling on it. These include free-standing guest houses, converted garages, and basement apartments. Sometimes these are built without the proper permits, but they offer a way to house more people on an existing parcel of land. Cities, including San Francisco, are increasingly looking at ADUs as a relatively quick and easy way to increase housing supply.

Public housing has been demonized in the U.S., but in Europe it serves millions of middle- and low-income families successfully while checking runaway speculation in the private market. As Shareable co-founder Neal Gorenflo argued in his Hack the Housing Crisis speech, creating more public and cooperative housing is key to tackling the housing crisis in San Francisco and beyond. Any long-term solution to the housing crisis requires taking a significant amount of housing out of the speculative market, which will require big, complex, policy change. This analysis of public housing in New York City, Singapore, and Vienna shows the way.

Housing cooperatives are a proven path to affordable housing where the residents own and manage a property together. By pooling their buying power, members can save on the purchase cost as well as on expenses such as utilities and WiFi. Housing coops come in all sizes and require skillful organizing to thrive. If you can't find a housing coop nearby to join, then start one. Check out Shareable staffer Mira Luna's guide to starting one.

Originating in Germany, baugruppen is a model for sustainable, affordable housing that is co-designed, co-created and co-owned by its residents. Drawing from both cohousing and condominium models, baugruppen is built around the specific needs and desires of individual communities and keeps costs significantly down by removing developers from the picture. For more information about baugruppen see Baugruppen: Germany's Sustainable Community Housing Model.

Micro houses—including tiny houses, cottages, shipping containers, mobile homes and more—offer affordable housing for those who can live in small spaces. Small homes are less expensive and more energy efficient than larger houses and they can be built or wheeled into lots that can't accommodate larger homes. And micro houses are small and customizable enough to lend themselves to innovative housing solutions. For instance, there's a tiny house village for the homeless in Austin, Texas.

Tiny apartments allow for incredible housing density in cities. Generally falling in the 100 to 200 square foot range, there are, however, some extreme examples that test the limits of tiny. In Tokyo, for instance, there are apartments that are aptly described as coffin-sized. A recent street art project parodying the high cost of housing in San Francisco saw trash cans and planter boxes going several thousand dollars each. For those who can embrace minimalism, tiny apartments offer an affordable alternative to expensive urban housing.

Seniors prize safety, location, affordability, and community engagement in housing. Enter senior community housing. The idea is that seniors, rather than living in isolated apartments or houses, can live in housing communities that prioritize community interaction. Many of these are designed with affordability in mind. Good examples of senior community housing are the Mary Helen Rogers Senior Community in San Francisco and the Jewish Community Housing for the Elderly in Boston, Massachusetts.

Pre-fabricated, modular dwellings offer interesting housing options including placing housing units on top of existing buildings. They can also be more affordable and energy efficient than traditional homes. As Taeko Takagi of ZETA Design + Build pointed out, factory-built homes take 75 percent less time to build than traditional construction and save 20 percent in materials cost. Modular homes could provide housing on idle land quickly, efficiently and affordably. At the event, Tim McCormick, founder of Houselets suggested that small, prefabricated homes could even be put in garages, driveways, and parking spaces.

Coliving combines shared housing, community living, and collaboration on professional projects in one neat package. Sharing housing is nothing new—college students and young city-dwellers regularly share housing to cut costs. But there are differences that separate rent-paying housemates from a coliving community. Primarily, coliving is, from the outset, built around an intention to create a tight, productive community to accelerate personal and community development. Chelsea Rustrum, an entrepreneur and coliving advocate, describes it like this: “We have this vision in common of how we want to change the world.” For more information about coliving check out the article Hacking Home and Coliving.org.

Work trade for housing offers a way to exchange skills and elbow grease for a place to live. Services bartered can include pet-sitting, childcare, yard maintenance, elder-care, house-sitting, handyperson services, gardening and much more. Benefits of work trades can include paying rent with your time rather than dollars, and work flexibility. One drawback of work trade is that you may end up living where you work, but in the right situation, if clear boundaries and communication are set, this isn't an issue.