Climate change: IPPR's Low Carbon Manifesto: "there should be a shift in focus away from large-scale generation to energy efficiency, new sources of finance for low-carbon infrastructure and a recognition of the huge role that the regions play in low-carbon energy generation."

Today's Independent on Sunday looked at a report just out from the Institute for Public Policy Research think tank on climate change:

The Government should carry out an urgent assessment of how a rise in global temperatures will affect Britain's transport infrastructure, homes and energy resources, including pre-empting a repeat of the flooding crisis of last winter, a report by the IPPR think-tank proposes today.

An audit of risk would emulate Barack Obama's National Climate Assessment, launched last month, to prepare the United States for changes in temperatures, including a catastrophic rise of 6C, the IPPR's Low Carbon Manifesto says.

While this year's widespread flooding across Britain sent political leaders wading into the deluge with wellies for photo-opportunities, parties should introduce concrete proposals for preventing a floods disaster in their 2015 general election manifestos.

Despite global warming receding from the political agenda, voters are increasingly worried about the issue: a survey for the Department of Energy and Climate Change earlier this year found that 68 per cent of people are "concerned", compared to 64 per cent in June 2012.

The climate risk assessment would be a comprehensive audit of how different scenarios, including where average global temperature rises do not keep below 2C, will affect UK business, transport, energy, homes and health services. The assessment would be overseen by the Cabinet Office, carrying prime ministerial backing.

The IPPR's Low Carbon Manifesto says that to deal with expected warming, there should be a shift in focus away from large-scale generation to energy efficiency, new sources of finance for low-carbon infrastructure and a recognition of the huge role that Scotland and the English regions outside London and the South-east play in low-carbon energy generation.

The IPPR says the Green Deal, where people are given government loans to make their homes more energy efficient, is not working because only 3,234 households had signed up to the scheme by June 2014 – far fewer than the 130,000 in the first year envisaged by the Government. Only 23 per cent of the total budget for the Energy Company Obligation (Eco) is going to fuel-poor households, the IPPR says.

Both the Green Deal and the Eco should be replaced by a Help to Heat scheme to cut bills through energy-efficiency measures. To help the wider British economy, the Government must invest more in the regions – which are, the report shows, producing more low-carbon energy than the UK capital.

The report points out that even President Xi Jinping of China has begun to take climate change and green technology seriously.

The IPPR says the Government needs to address four challenges to tackle climate change: the consumer challenge, in overcoming soaring fuel bills and tackling fuel poverty; the capacity challenge, in investing in more decentralised energy generation; the regional challenge, where the economy is recovering at a national level but less so in the regions; and the international challenge, where the EU has "lost its leadership position on climate change" while the US and China have taken steps to clean up their economies.

It states: "To date, there has been a large degree of political consensus on the necessity of tackling climate change. Both the Climate Change Act (2008), which set binding targets to cut emissions by 80 per cent against a 1990 baseline by 2050, and the Energy Act (2013), which put in place government policies to encourage investment in low-carbon technologies, received royal assent with cross-party support.

"However, these Acts have also had the effect of allowing politicians to avoid confronting the public with some of the trade-offs associated with taking stronger action now to avoid greater costs in the future. It will become far harder to keep these trade-offs away from the public glare in the next parliament."

"Nearly 70 per cent of the British public are concerned by climate change, creating a clear political mandate for action on the issue. Sceptics claim there is little point in Britain acting alone to tackle climate change while other countries, and notably the US and China, continue to burn fossil fuels. [Yet], both President Obama and President Xi are now taking the issue seriously.

"Addressing climate change is an important goal in its own right but this report shows that it can also help address four of the greatest challenges facing our country."

Addressing climate change is an important goal in its own right but, as this report and illustrated guide demonstrate, it can also help address some of the greatest economic and social challenges facing our country.

It has been known for years that climate change is happening and is man-made, and there is growing concern that the world is heading for a catastrophic temperature rise of 4°C. Since 2010, increased instances of severe weather events, rising import dependency and oil prices, and the falling costs of renewable energy have all added to the case for urgent action. Nearly 70 per cent of the British public are concerned by climate change, which represents a clear political mandate for action.

As well as being an important goal in its own right, addressing climate change can – as this report and the illustrated guide that accompanies it demonstrate – help to address three of the greatest challenges facing our country.

The consumer challenge: energy and transport costs have spiralled and trust in markets has declined, while living standards have stagnated.

The capacity challenge: there has been a lack of investment in much-needed new infrastructure, and not enough emphasis has been placed on managing existing usage of energy and transport.

The regional challenge: while there has been economic recovery at the national level, there has been varied performance in terms of decent jobs and growth in our regions.

Getting our domestic policy on climate change right is vital if we are also to meet the international challenge. The EU is losing its leadership position on climate change and needs fresh impetus, particularly since China and the US are now takingsignificant new steps to clean up their economies.

The report sets out each of these challenges in greater detail, and offers 17 ideas for how these problems can be addressed. These ideas centre on the need for:

> an Obama-style audit of the risks that climate change poses to our security and way of life here in the UK
> a shift in focus away from large-scale generation onto energy efficiency, ‘smart’ demand-management tools, and smaller technologies, so that we can realise their potential to cut bills, reduce carbon and create jobs
> new sources of finance for low-carbon infrastructure, particularly from communities and individuals
> greater certainty for all our low-carbon sectors so that businesses have a solid framework in which to grow and create decent jobs in every region.

There are lots of graphics in the illustrated guide: 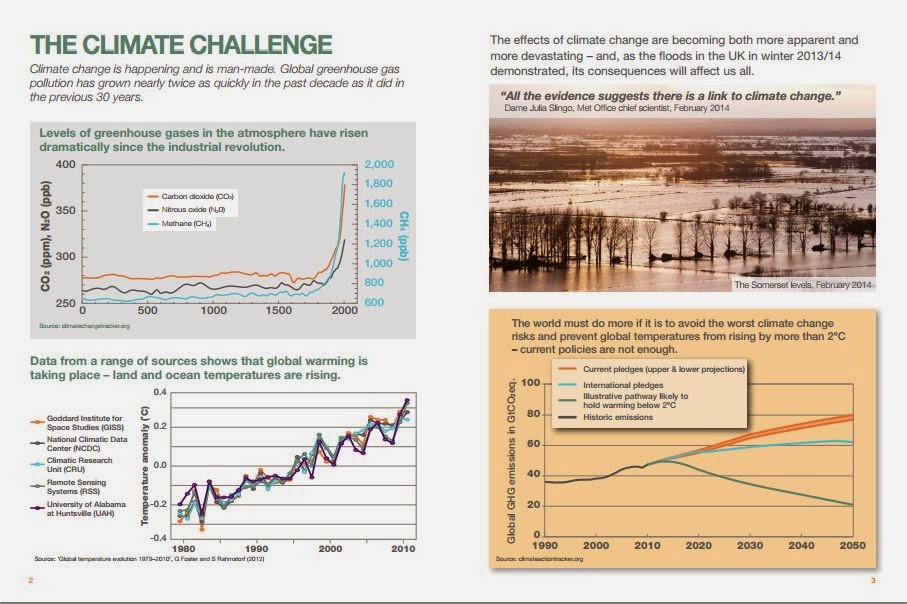 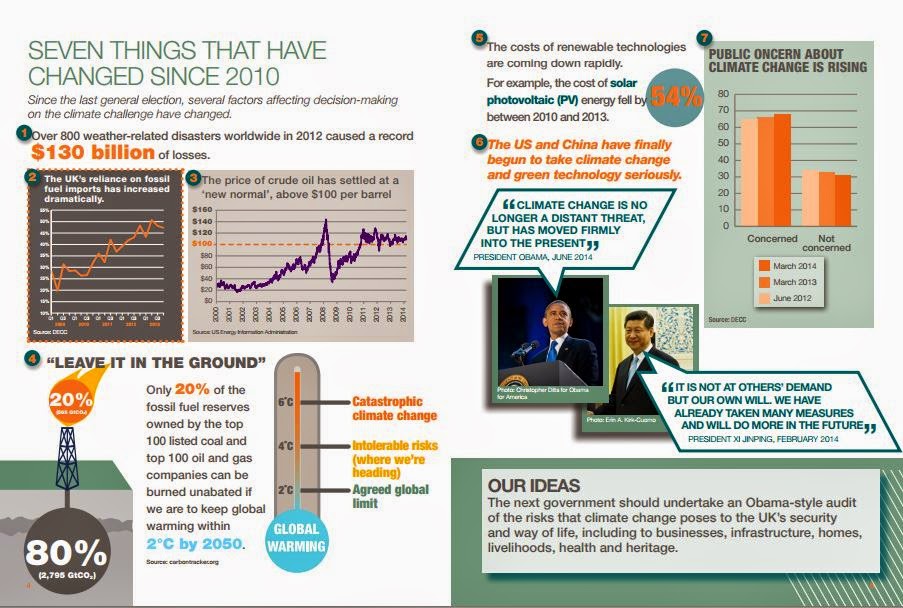 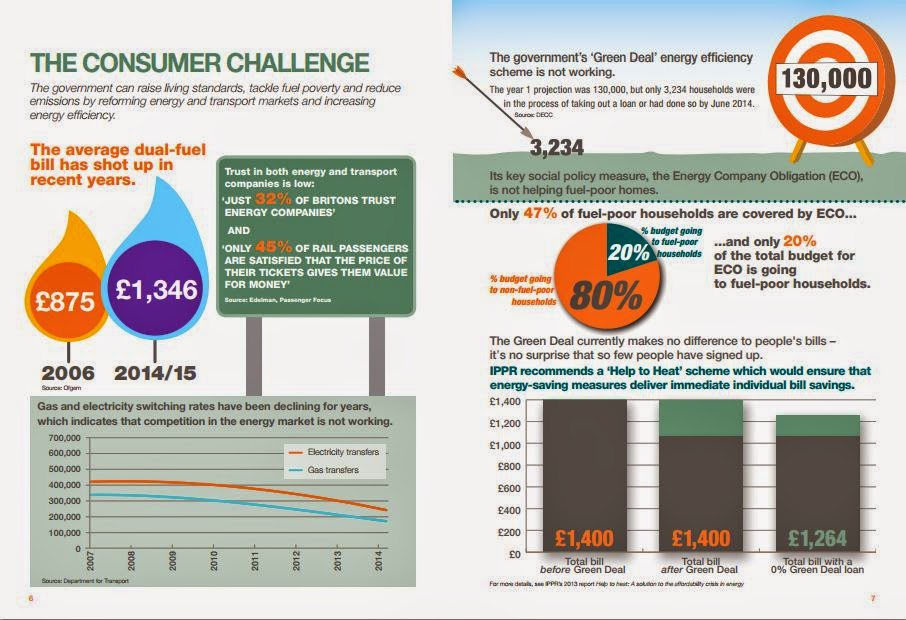 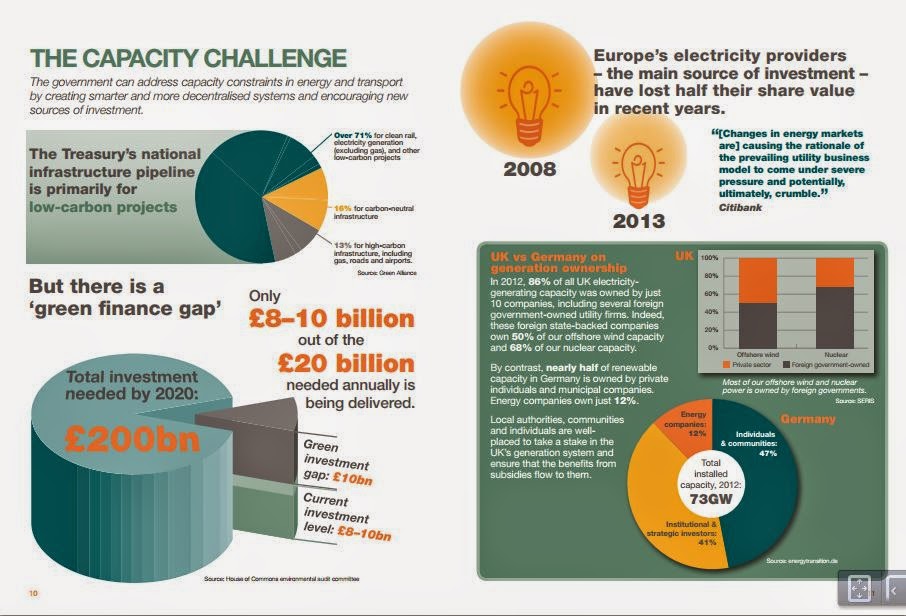 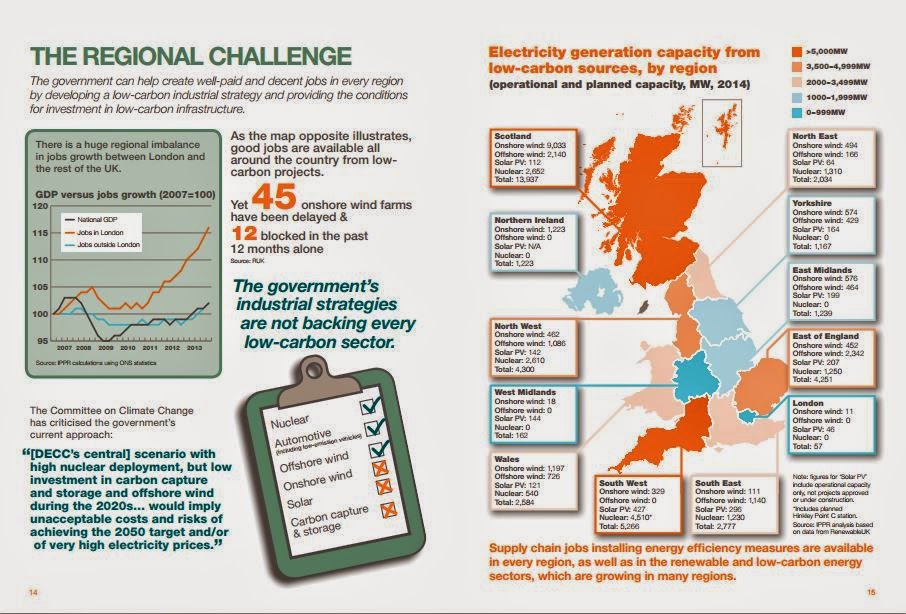 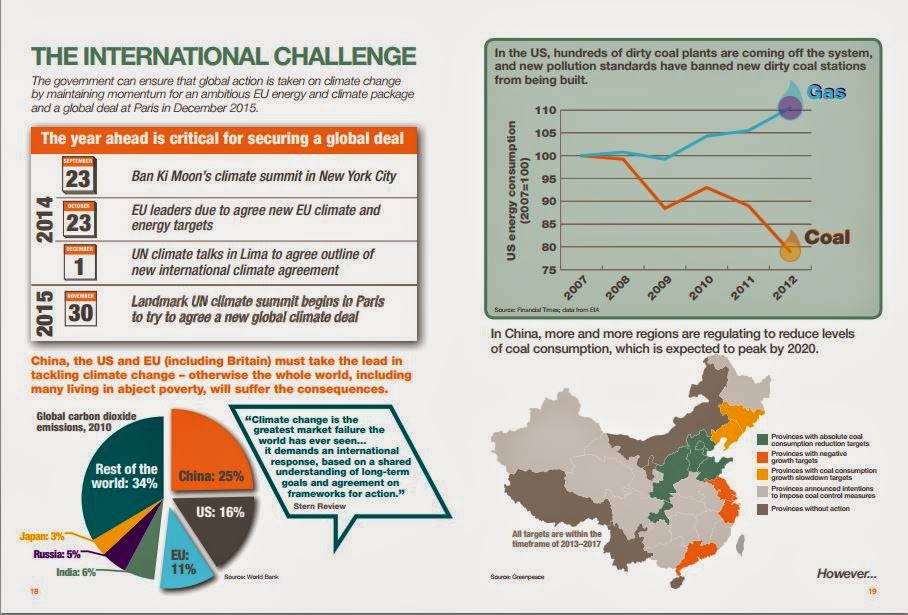 www.ippr.org/assets/media/publications/pdf/an-illustrated-guide-to-a-brighter-future_Aug2014.pdf
.
.
.
Posted by Jeremy Woodward at 10:59