On the River Otter: Devon Wildlife Trust consultation to discuss beavers: Ottery St Mary: today Tuesday 19th August ... but would the beaver be "subject to potential eradication measures under the Infrastructure Bill"?

One of the District's MPs - Rt Hon Hugo Swire - in his first e-bulletin to constituents, has outlined his own activies these last weeks:

"One emotive issue which has had significant coverage in both the local and national press over the past few months has been the Government's response to the discovery of a family of beavers living on the banks of the River Otter. As soon as this story emerged I wrote to the then Secretary of State for Environment, Food and Rural Affairs, Owen Paterson, who assured me, contrary to some reports, that the Government has no plans whatsoever to cull these animals.

"I also set up a meeting between myself, Lord De Mauley - the Minister responsible for this area of policy - and a number of representatives from the Devon Wildlife Trust. During this meeting it was established that the Government intends to capture and test these beavers for the Echinococcus multilocularis (EM) parasite. If transmitted to humans, this parasite can cause cysts in the internal organs, including the brain. If these tests prove negative and the beavers are to return to the River Otter, a relevant licence must be obtained first. The representatives from the DWT explained during this meeting that they intend to apply for such a licence from Natural England."

In the Guardian last month, a rather different take came from George Monbiot:

The infrastructure bill seeks to reclassify extinct species as non-native, and prevent them from returning 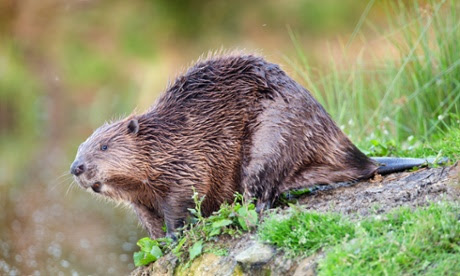 The European beaver, once native to the UK, would be subject to potential eradication measures under the infrastructure bill. Photograph: Alamy

Can any more destructive and regressive measures be crammed into one piece of legislation? Already, the infrastructure bill, which, as time goes by, has ever less to do with infrastructure, looks like one of those US monstrosities into which a random collection of demands by corporate lobbyists are shoved, in the hope that no one notices.

So far it contains (or is due to contain) the following assaults on civilisation and the natural world:

• It exempts fracking companies from the trespass laws.

• It abandons the government's commitment to make all new homes zero-carbon by 2016.

• It introduces the possibility (through clauses 21 and 22) of a backdoor route to selling off the public forest estate. When this was attempted before, it was thwarted by massive public protest.

• It further deregulates the town and country planning system, making life even harder for those who wish to protect natural beauty and public amenities.

• It promotes new road building, even though the total volume of road traffic has flatlined since 2002.

Enough vandalism? Not at all.There's yet another clause aimed at suppressing the natural world, which has, so far, scarcely been discussed outside parliament.

If the infrastructure bill is passed in its current state, any animal species that "is not ordinarily resident in, or a regular visitor to, Great Britain in a wild state" will be classified as non-native and subject to potential "eradication or control". What this is doing in an infrastructure bill is anyone's guess.

At first wildlife groups believed it was just poor drafting, accidentally creating the impression that attempts to re-establish species which have become extinct here – such as short-haired bumblebees or red kites – would in future be stamped out. But the most recent Lords debate scotched that hope: it became clear that this a deliberate attempt to pre-empt democratic choice, in the face of rising public enthusiasm for the return of our lost and enchanting wildlife.

As Baroness Parminter, who argued unsuccessfully for changes to the bill, pointed out, it currently creates a one-way system for biodiversity loss, as once an animal ceases to appear in the wild, it ceases to be native.

She also made the point that it is not only extinct species which from now on will be treated as non-native, but, as the bill now stands, any species listed in schedule 9 of the Wildlife and Countryside Act 1981.

Among those in schedule 9 are six native species that have already been re-established in Britain (the capercaillie, the common crane, the red kite, the goshawk, the white-tailed eagle and the wild boar); two that are tentatively beginning to return (the night heron and the eagle owl); and four that have been here all along (the barn owl, the corncrake, the chough and the barnacle goose). All these, it seems, are now to be classified as non-native, and potentially subject to eradication or control.

After the usual orotund time-wasting by aristocratic layabouts ("my ancestor Sir Ewen Cameron of Lochiel, who was known as the great Sir Ewen ... killed the last wolf in Scotland" etc), the minister promoting the bill, Baroness Kramer, made it clear that the drafting was no accident. All extinct species, it appears, are to be treated as non-native and potentially invasive. At no point did she mention any of the benefits their re-establishment might bring, such as restoring ecological function and bringing wonder and delight and enchantment back to this depleted land.

Here is a list, taken from my book Feral, of a few of the animals which have become extinct recently (in ecological terms) and which probably meet the bill's new definition of non-native: "not ordinarily resident in, or a regular visitor to, Great Britain in a wild state". Some would be widely welcomed; others not at all, but it's clear that a debate about which species we might bring back is one that many people in this country want to have, but that the government wants to terminate. There's a longer list, with fuller explanations and a consideration of their suitability for re-establishment, in the book.

• European beaver: became extinct in Britain in the mid-18th century, at the latest. Officially re-established in the Knapdale Forest, Argyll. Unofficially in the catchment of the River Tay and on the River Otter, in Devon...

How the coalition is stopping the reintroduction of wildlife to the UK | George Monbiot | Environment | theguardian.com