Perhaps a solution for the current impasse in the District would be not to question the setting up of special sites for growth and development:
Futures Forum: Are 'retail parks' a good thing?
Futures Forum: What is the difference between a 'business park'... and a 'retail park'... Part Two

... but to create even more development zones:

DISGUSTED by an increasingly invasive state, America's most capable entrepreneurs retreat to Galt's Gulch, a libertarian commune. That was the theme of Ayn Rand's magnum opus, “Atlas Shrugged”, a sacred text for libertarians ever since it was published in 1957. Actually creating such an enclave has been the dream of many fans of small government (or of none at all). Several have had a try at it, but their efforts have always ended in disaster (see table).

Now, for the first time, libertarians have a real chance to implement their ideas. In addition to a big special development region, the Honduran government intends to approve two smaller zones. And two libertarian-leaning start-ups have already signed a preliminary memorandum of understanding with the Honduran government to develop them.
In this section
Reprints
Related topics
One firm goes by the name of Future Cities Development Corporation. It was co-founded by Patri Friedman, a grandson of Milton Friedman, a Nobel laureate in economics, and until recently executive director of the Seasteading Institute, a group producing research on how to build ocean-based communes. The other is called Grupo Ciudades Libres (Free Cities Group) and is the brainchild of Michael Strong and Kevin Lyons, two entrepreneurs and libertarian activists.
Both share a purpose: to build “free cities”. Last April all three spoke at a conference organised by Universidad Francisco Marroquín, a libertarian outfit in Guatemala. In September they and Giancarlo Ibárgüen, the university's president, launched the Free Cities Institute, a think-tank, to foster the cause.
As so often with enthusiasts, divisions within the cause run deep. The two firms hail from different parts of the libertarian spectrum. Mr Friedman is an outspoken critic of democracy. It is “ill-suited for a libertarian state”, he wrote in an essay in 2009—because it is “rigged against libertarians” (they would always lose) and inefficient. Rather than giving its citizens a voice, he argues, they should be free to exit; cities should compete for them by offering the best services.
The second firm's backers appear to be less radical. A founder of several charter schools, Mr Strong is now the force behind FLOW, a movement that claims to combine libertarian thinking “with love, compassion, social and environmental consciousness”, says its website. He too prefers exit over voice (meaning that he thinks that leaving and joining are better constraints on executive power than the ballot box). But he also believes that democratic consent is needed in certain areas, such as criminal justice. His goal in Honduras is less to implement libertarian ideals than to reduce poverty and to speed up economic development.
Some in the Honduran government have libertarian leanings, which is one reason why the authorities have moved so quickly. But when the master developers for the new zones are selected next year, strong political credentials will not be enough—and may even prove to be a drawback. Mr Friedman is stressing a difference between his political beliefs and his firm. “Ideology makes bad business,” he says, adding that Future Cities Development wants to focus on the needs of the people who live in the city.
Yet the biggest hurdle for the libertarian start-ups may be that the transparency commission, which will oversee the development regions, is unlikely to give them free rein. The “constitutional statute” for the development zones, which the Honduran national congress passed in August, does not leave much wiggle room in key areas, not least when it comes to democracy: ultimately their citizens will vote.
Both firms, however, have links to prominent libertarians with deep pockets. Mr Strong is close to John Mackey, the co-founder and chief executive of Whole Foods, a high-end supermarket chain—though Mr Strong says that Mr Mackey already has too many other things on his plate. Mr Friedman's contacts seem more promising: the Seasteading Institute received lots of cash from Peter Thiel, a Silicon Valley billionaire who founded the internet payment service PayPal and was an early investor in Facebook, the world's biggest social network.
Mr Thiel's ambitions go far beyond scouting out the next big thing in technology. “I no longer believe that freedom and democracy are compatible,” he wrote in an essay in 2009. This is why libertarians should find an escape from politics, he added. “Because there are no truly free places left in our world, I suspect that the mode of escape must involve some sort of new and hitherto untried process that leads us to some undiscovered country.” Back then he had the ocean or space in mind. Honduras would certainly be more convenient.

And:
The Free Cities Institute | Let A Thousand Nations Bloom 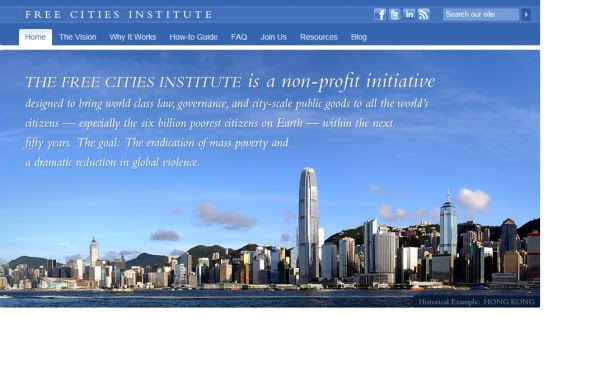