The pressures to build on green fields: "the number of new homes is growing"

According to a report just out, 'the number of new homes is growing' in the green belt:

The housing market has reawakened in many parts of the UK as consumer confidence has improved and long frustrated house purchasers have sought to trade-up or buy their first home. This revival has heightened the debate over the consequences that long term under-supply of new homes is having on the cost and access to housing and the threat to sustained economic growth.

New housing volumes have been increasing. The government’s National Planning Policy Framework (NPPF) appears to helping developers to bring more sites forward for development. However, the rising volumes are also amplifying the debate over the location of new developments. Demand for development sites is strong and set to grow even further as the UK economic recovery gathers momentum. As demand grows, potential pressure on greenbelt locations is likely to intensify. 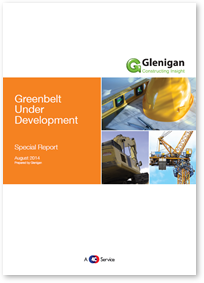 Glenigan analysis of recent planning applications for English greenbelt sites in the report Greenbelt Under Development, prepared exclusively for The Daily Telegraph, reveals some striking trends. While on the face of it, overall greenbelt planning applications and approvals have been relatively stable over the last five years, the number of residential projects securing approval is on the rise.
Glenigan analysis shows that greenbelt sites still account for a very small proportion of all residential planning approvals. In 2013/14, 1.6% of planning approvals for schemes of three or more homes were on the greenbelt land. However, the number of new homes involved is growing. As the economy recovers and demand for new homes increases, so will the potential pressure for the release of more the greenbelt sites.

Download our Green Belt Under Development report by clicking here.

The article in yesterday's Telegraph has upped the game a little more: 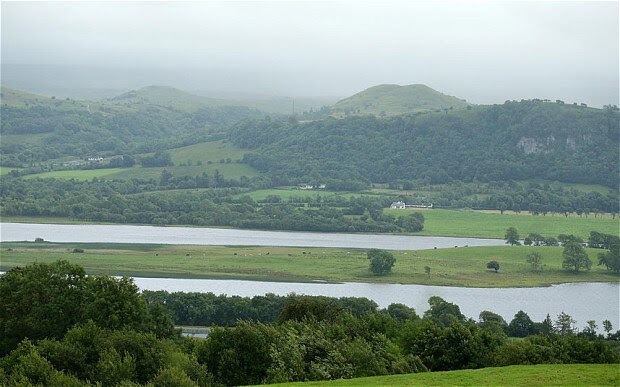 The number of new homes built on the protected Green Belt has more than doubled since the Coalition was formed. Figures obtained by The Telegraph show that 15 new homes in England are now approved on Green Belt land every single day.

Campaigners said the findings were “alarming” and called on the Government to intervene to save parts of the green belt from developers’ bulldozers. The Green Belt is a ribbon of land around towns and cities which were designated in the aftermath of the Second World War to stop urban sprawl.

The National Planning Policy Framework, which was introduced in March 2012, was meant to introduce further protections for the Green Belt from developers. However, the figures will raise serious questions about whether the Green Belt is being appropriately protected.

The figures are contained in a report titled “Green Belt under development” by Glenigan, the planning and construction industry experts which supplies figures to government departments and agencies. The report found that on the face of it overall planning applications and approvals have been relatively stable over the past five years.

However last year saw the approval of 5,600 new homes on the Green Belt, compared to just 2,260 in 2009/10 - a 148 per cent increase over the five-year period. This is despite development on the Green Belt only being allowed “in exceptional circumstances” by planning rules. Developments of three or more homes accounted for a growing majority of residential units built on Green Belt sites. The report showed that approvals have risen progressively since 2009/10, with 227 projects approved in 2013/14 - a 161 per cent rise over the five-year period.

Allan Wilén, economics director at Glenigan, said: “The number of new homes involved is growing. As the economy recovers and demand for new homes increases, so will the potential pressure for the release of more the Green Belt sites.” The figures would appear to confirm reports of planning wars breaking out across the country with residents battling unwanted schemes forced on communities by councils which have to meet five year housing plans.

Glenigan’s figures were condemned by countryside campaigners, who have long warned that the green belt around towns and cities was not safe from developers.

The Campaign to Protect Rural England said the report was evidence of “a very worrying trend that shows Green Belt policy is not working as it should”. Paul Miner, a spokesman, said: “CPRE accepts that there are some suitable sites on Green Belt land, such as old hospitals or research centres, that could be re-developed. But new homes should be built in the footprint of existing buildings, not allowed to intrude on the rest of the Green Belt, which is what we’re seeing time and time again at the moment.”

The National Trust also said that it was concerned by the evidence that more of the Green Belt was being built on by developers.

Local authorities have a duty under the NPPF to set out where new homes can be built over the next five years. They can also earmark or “safeguard” other land - including some areas of the green belt - that might be required for future development. Earlier this year MPs complained in a Parliamentary debate that councils were needlessly earmarking sites on the Green Belt for development.

The Government said that development on the Green Belt was now at its lowest level in terms of acres sacrificed to builders since 1989.

Brandon Lewis, the Planning minister, said that ministers had “fortified the Green Belt” by abolishing targets which were established under the Labour Government. He said that “official statistics show that the level of Green Belt development is at its lowest rate since modern records began in 1989”. He said that Government was also encouraging the sale of “surplus brownfield land for redevelopment, and introducing more flexible planning rights so empty and underused buildings can be brought back into productive use”.

He added: “Local Plans are now at the heart of the planning system, so councils decide where development should go. There is enough brownfield land to deliver up to 200,000 new homes, and councils should be using their powers and the support that’s available from the Government to prioritise development on these sites, and defend our valuable countryside against urban sprawl.”
Related ArticlesNew planning minister suggests Nimbys have had their day 25 Jul 2014Britain is nothing without fields and hedgerows 13 Jun 2014Osborne wants more homes on brownfield sites08 Jun 2014Ancient Battle of Fulford resumes at High Court 22 May 2014Number of new housing estates jumps by a quarter since planning reforms 04 May 2014William Wordsworth would be in 'fits' about planning reforms, says Sir Andrew Motion 25 Apr 2014

The Rural Services Network had a different take on the same story:

COUNCILS should prioritise development on brownfield sites – and defend the countryside against urban sprawl, a government minister has warned.
Housing and planning minister Brandon Lewis made the comment in response to claims in the Daily Telegraph about development on the Green Belt.
The newspaper said it had obtained figures showing that an average of three housing developments were now approved on Green Belt land every single day.
The figures would raise serious questions about whether the Green Belt is being appropriately protected, said the newspaper. They were included in a report titled "Green Belt under development" by planning and construction experts Glenigan, which supplies figures to government departments and agencies.
Mr Lewis said the government had been very clear that Green Belt protection continued. "The most recent official statistics show that the level of Green Belt development is at its lowest rate since modern records began in 1989," he said.
The Green Belt had been fortified by abolishing the last government's top-down Regional Strategies and selling surplus brownfield land for redevelopment. The government had also introduced more flexible planning rights so empty and underused buildings could be brought back into productive use.
"Local plans are now at the heart of the planning system, so councils decide where development should go," said Mr Lewis. There was enough brownfield land to deliver up to 200,000 new homes. "Councils should be using their powers and the support that's available from the government to prioritise development on these sites, and defend our valuable countryside against urban sprawl."
The latest figures also showed a loss of only around 0.02% of the total Green Belt - and the Green Belt was now about 34,000 hectares larger than in 1997. Ministers were committed to prioritise and accelerate development on brownfield sites, said Mr Lewis.
Local development orders were a flexible option that councils could use to grant planning permission so construction could begin as soon as possible. A £5m fund was launched on 7 August to help councils consult on local development orders for brownfield land they identify. Ministers had also outlined plans for 30 housing zones on brownfield land in London and across the country. Further details would be be announced shortly.

However, Brandon Lewis, new planning minister says: …“Local Plans are now at the heart of the planning system, so councils decide where development should go. There is enough brownfield land to deliver up to 200,000 new homes, and councils should be using their powers and the support that’s available from the Government to prioritise development on these sites, and defend our valuable countryside against urban sprawl.”

Er, perhaps he hasn’t yet been briefed on what happens when you haven’t got a Local Plan or a 5 or 6 year land supply.