On zoning, self-build and affordable housing .............. relaxed planning laws in the United States

'Land use' is a tricky term wherever you are:
Taylor & Francis Online :: A Multiple Land Use Classification System - Journal of the American Institute of Planners - Volume 25, Issue 3

But in the UK, the issue of 'zoning' or 'land use' seems to be most problematic when it comes to housing:
Relaxation planning permission rules | IoD
Relaxation of planning rules for change of use from offices to residential - gov.uk
Britain Unleashed: Just relax the planning system – Telegraph Blogs
BRITAIN’S SOVIET PLANNING SYSTEM

One could look to the United States for a more 'relaxed planning' tradition - as showcased in Channel Four's recent series which took us to Texas:

George and Will's Texan road trip brings them to the state capital of Austin, where no more than a mile from city hall a woman has handbuilt a £10,000 three bed family home from mud.
George Clarke's Amazing Spaces - Episode Guide - Channel 4
George Clarkes Amazing Spaces S03 E05 on Vimeo


Man Made Home in Man Made Hill in Texas

Of all the states in the USA, the reason George chose Texas was because over the years it has a reputation due to wide open spaces and loose planning laws and regulations, for attracting some of the most eccentric small builds

The first destination for George and Will’s trip across the Lonestar state was to a town just outside Dallas. They visit a man called Al Shwaltz who has designed and built something that you’d be forgiven for thinking was just a series of hills. In actual fact, it’s a manmade cavern. The existing hills were removed and then remade using special dome shaped inflatable balloons to form the pod shapes of the cavern. They were then reinforced and covered in mud and rocks, so that it disappeared into the landscape.

The inside was particularly special though as it was incredibly big and had lots of open spaces. There was a cinema/theatre area, which was not just a big screen and a couple of chairs, it was a proper cinema. He had also made sure there was space for a nice and equipped kitchen, a bar and even a pool table.

With further reports on this same architectural creation from the US media:


Robot Ranch: An earth-sheltered dome and a work in progress

Robot Ranch. — An elaborate door welcomes visitors to this Monolithic Dome home built into the side of a hill. Its gross floor area of 4,144 square feet includes two bedrooms and bathrooms, living area, kitchen, theater, office.

Robot Ranch: An earth-sheltered dome and a work in progress | Monolithic

And here's something else - again with minimum planning regulations - and at a very low cost:


A Hobbit House:
With a historical base, Gary Zuker built his hobbit house with a clay and straw mix.
By Robyn Griggs Lawrence
March/April 2000

Gary and a third-generation stonemason hauled boulders to build the dry-rubble foundation, the doorway, and the fireplace. Gary created the window seat out of granite and a cedar log that he found in the nearby woods. His wife, Delores, a stained-glass artist, made the dining room windows.
Photos by Paul Bardagjy
Slideshow

A Cottage of Straw, Handmade in Texas 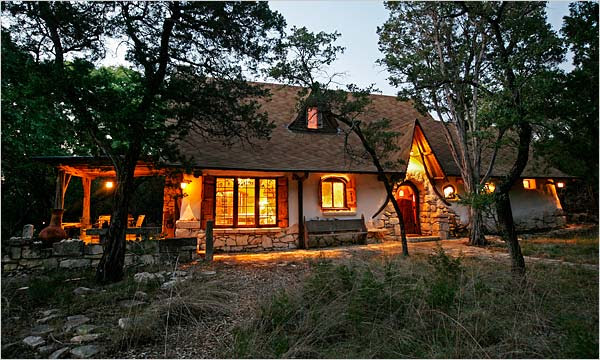 A 900-square-foot weekend house in the Hill Country near Austin, Tex.
What stands today in Mr. Zuker’s enchanted forest is a tribute to ingenuity, perseverance and frugality. He spent just $25,000 to build the house and $15,000 more for the well and septic system.


Away - A Straw-and-Clay Cob House near Austin, Tex. - NYTimes.com

Despite this more relaxed regime, there's quite a debate in the United States about the merits or otherwise of 'zoning':
Zoning - Wikipedia, the free encyclopedia

Scratching By: How Government Creates Poverty as We Know It

Progressives routinely deplore the “affordable housing crisis” in American cities. In cities such as New York and Los Angeles, about 20 to 25 percent of low-income renters are spending more than half their incomes just on housing. But it is the very laws that Progressives favor—land-use policies, zoning codes, and building codes—that ratchet up housing costs, stand in the way of alternative housing options, and confine poor people to ghetto neighborhoods. Historically, when they have been free to do so, poor people have happily disregarded the ideals of political humanitarians and found their own ways to cut housing costs, even in bustling cities with tight housing markets.


Scratching By: How Government Creates Poverty as We Know It : The Freeman : Foundation for Economic Education