Development: 'commercial confidentiality', being held to 'ransom' and developers picking holes in each other’s sites.

In the last couple of days, there have been set-backs for would be 'development' in East Devon:

If you thought getting information from EDDC was harder than extracting a wisdom tooth, your opinion might just be confirmed by today’s news from the “What Do They Know?” website.
It concerns the saga of an Exmouth resident’s struggle to shed some light on the 2009 deal between EDDC and Clinton Devon Estates to lift the historic covenants owned by CDE which restricted building along Exmouth seafront.
In return for a payment of £50,000 to CDE, the council was able to proceed with its controversial plans to redevelop the seafront – including the demolition of Elizabeth Hall.
But the public never knew the background to the agreement. Two officers’ reports to Council Leaders were marked strictly “not for publication.”
In April 2013, Tim Todd lodged a Freedom of Information request for these reports to be released in “the public interest”. In August the Monitoring Officer refused on grounds of “commercial confidentiality” and an infringement of  “the human rights of Lord Clinton” were cited as a possible reason not to publish.
The Information Commissioner disagreed, and required East Devon District Council to disclose the secret reports, which they have just done – with some redactions. BUT,  EDDC misleadingly fail to mention that it was the IC’s intervention that obliged them to do so.
The reports suggest that EDDC would be held to “ransom” by CDE every time they wanted to develop individual sites, so it would be better to make  a comprehensive agreement for the whole seafront, once and for all. And, significantly, the senior officers also point out that a quick deal would have the advantage of “bringing to an end what has been an unfortunate public airing of this issue”.
Exmouth Seafront Covenants: “an unfortunate public airing” | East Devon Alliance
Further background papers re £50k Covenant - a Freedom of Information request to East Devon District Council - WhatDoTheyKnow 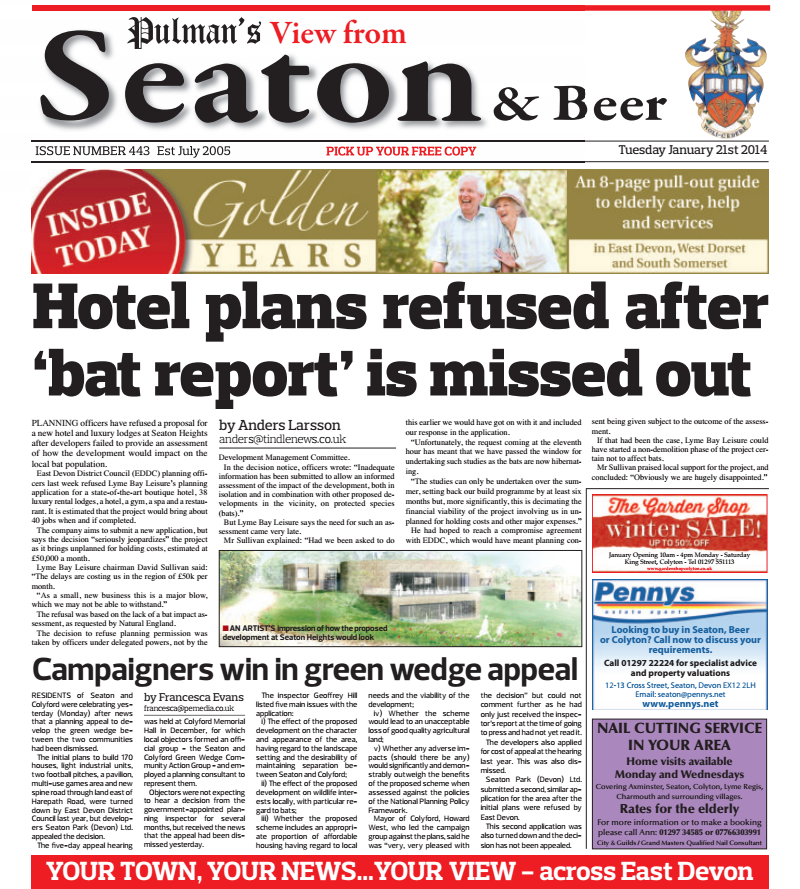 The plans submitted for the development of Stoneleigh Holiday Park ( aka Weston Bay Resort ), didn’t seem to stack up, especially with regards to Highways and the number of vehicles. The plans for Stoneleigh and Seaton Heights Hotel sailed through despite opposition from locals. The companies involved are now in liquidation as many of us predicted based on the previous 20+ companies run by these particular directors. It would seem to me that with regards to planning and development, the EDDC is not fit for purpose, and that some kind of public inquiry is the only way to clean it up
Letter to Cllr M Williamson, Chairman of the Development Management Committee, EDDC | Save Our Sidmouth

FENITON:
The Super Inquiry reopens at 9.30, on 4 February, at the Flybe Training Academy.
Network Rail wade into the debate on housing in Feniton | Susie Bond

The battle of the developers - Feniton inquiry

Cllr Roger Giles has been attending the Feniton inquiry every day, which I am unable to do due to other commitments.
Most taken by this morning’s events involving one developer battling it out against another - and the ensuing demolition of Strategic Land Partnerships agent, by the Wainhomes QC, Cllr Giles has written the following account
The Feniton Super Inquiry has completed its second week. Friday afternoon had barely arrived – and it was time to close, to allow the presumably expensively hired representatives of the would-be developers to commence their long journeys home, and not to eat too much into their week-ends.
Your reporter took the view that the needs of the Feniton community should have been accorded more weight (to use the planning vernacular).

1. At 11:56 am on 18th Jan Sandra Semple wrote:
So, so useful to see developers picking holes in each other’s sites!
Interesting, too, that 3 places where EDBF members had such influence (Feniton, Greendale and Hill Barton business sites) coming under the microscope.
Claire Wright - Your Independent East Devon District Councillor for Ottery Rural
Sometimes you’re up, sometimes you’re down, Super inquiry, day 8 | Susie Bond
Feniton march hits the Western Morning News headlines. | East Devon Alliance
Futures Forum: " We really need to go back to basics and understand what the NPPF understands by ‘sustainable’."
Futures Forum: The NPPF under pressure: building houses on green space
.
.
.
Posted by Jeremy Woodward at 15:13