And there has been debate across Devon and the West Country, most of it hostile:
Solar farm plan for land at Rydon Farm, near Ogwell, near Newton Abbot, South Devon | Western Morning News
Solar farm will bring chaos to Mid Devon roads, claim objectors | Exeter Express and Echo
Henny: Solar farm bid ‘a blot on the landscape’ - News - East Anglian Daily Times
IVYBRIDGE TODAY | NEWS | Proposed solar farm is a ‘unacceptable flood risk’ | 2013
'25,000 panels will hit Port Isaac tourism' | This is Cornwall
Cheddar Gorge among targets for Coalition's 'vandalism' of the countryside | This is Somerset
www.mendiphillsaonb.org.uk/wp-content/uploads/2012/06/Paper-B-DRAFT-Mendip-Hills-AONB-Solar-Photovoltaic-Development-Position-Statementdoc.pdf

And across the UK:
Government's growth drive means England's most treasured landscapes can be 'vandalised' by developers - Home News - UK - The Independent

An application for a solar farm near Exmouth has been accepted
- despite it being on the edge of AONB:
Fears for farm next to proposed solar array - News - Exmouth Journal
Plans for massive solar farm submitted for Exmouth land | Exeter Express and Echo
Liverton solar farm backed by planners | Sidmouth Independent News
Liverton solar farm backed by planners - News - Devon 24
www.eastdevon.gov.uk/summary_of_decisions_070114.pdf
www.eastdevon.gov.uk/combined_dmc_agenda_070114.pdf
13/2202/MFUL | Proposed solar farm comprising the installation of solar arrays, equipment housing, fencing and ancillary equipment and alterations to existing access onto B3179 and widening of access track. | Land North Of Liverton Farm Salterton Road Exmouth EX8 5BW

The application for a solar farm near Sidbury was rejected:
Futures Forum: Solar Plan for Sidmouth fails
largely on the grounds that it was in AONB:
Jurassic solar park angers campaigners | Western Daily Press
Large solar farm planned in AONB, overlooking Sidbury. | Save Our Sidmouth

The applicants are inviting the public to an exhibition to view their latest plans, however: 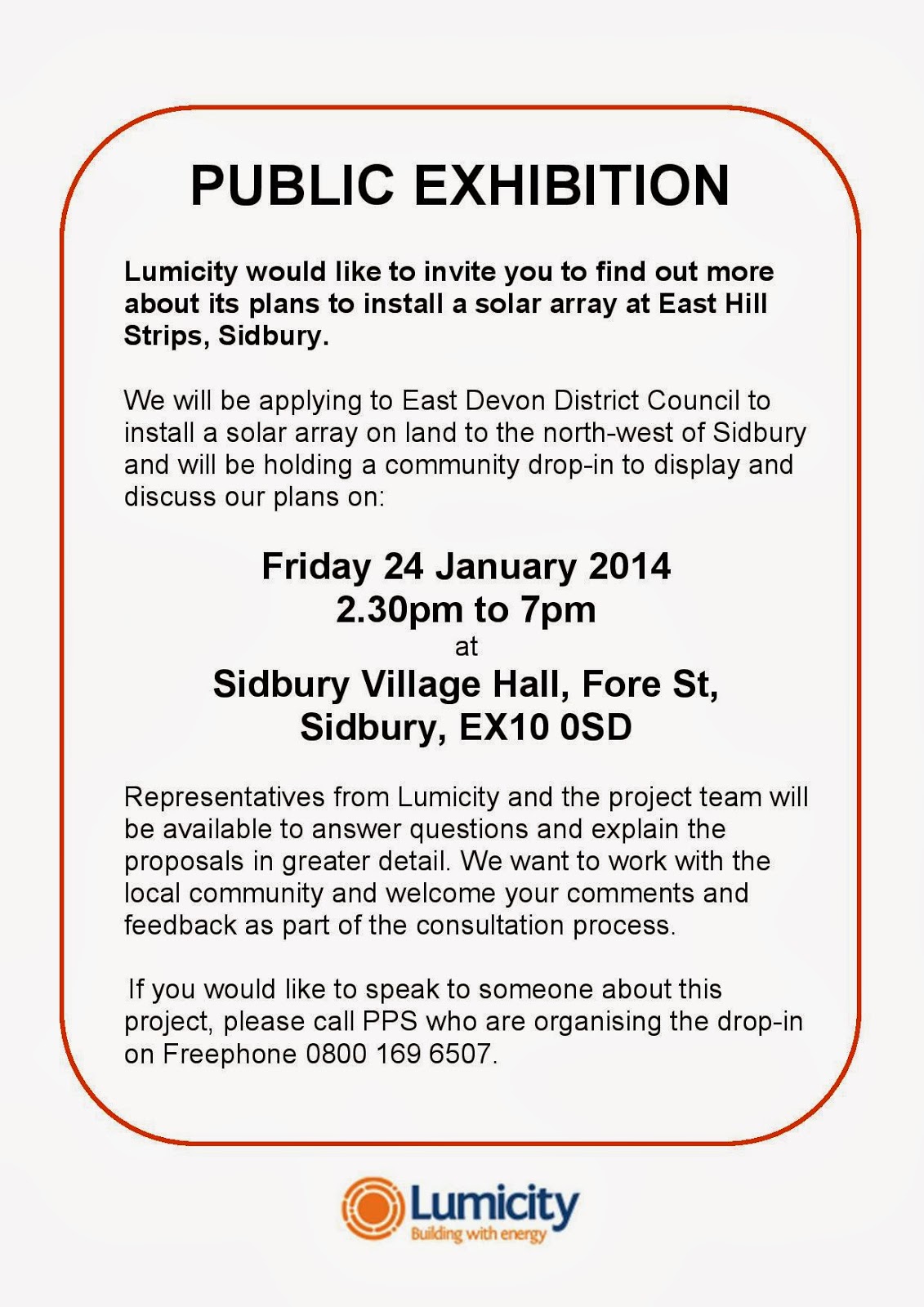 It seems, then, that due to widespread misgivings about solar farms, the developers are pushing to connect with the public:
Lightsource urges Somerton locals to ‘Get Involved’ with solar farm proposal | Solar Power Portal
New solar roadshow to boost rural business - Farming UK news

Although what real 'community benefit' is being proposed is another matter...

CALLINGTON town councillors have hit out at a solar farm developer and Cornwall Council after claiming the community will be left shortchanged by £600,000.
The town council has called for an urgent meeting with Cornwall Council following the revelation that a new solar farm in Haye Road will not provide the community benefit payment that was first marketed as part of the consultation in 2011.
When the application was presented to both the town council and Cornwall Council's strategic planning committee, it included details of the proposal to give £5,000 per megawatt (MW) installed, per year for 25 years, towards the community. The 5MW farm would produce an annual yield of £25,000 per year, making a total of £625,000.
However, renewable energy Inazin, took over the application for the original proposers Sunpower.
Sunpower had previously marketed the idea of providing the town council with £25,000 per year but no agreement was signed at the time of the consultation in 2011.
Inazin, however, signed a unilateral undertaking with Cornwall Council in April this year, for the company  one-off £20,000 payment – without the knowledge of the town council.
Andrew Long, chairman of the town council's planning committee and Cornwall councillor for Callington, said: "The residents of Callington in general and Haye, in particular, will rightly feel very let down by the system.
"We are incredibly angry and disappointed because that Community Benefit could have been used to stop harm being done by the solar farm. The money would have been used for community projects across the town and parish.
"We have asked the senior legal officer of Cornwall Council, Richard Williams, to attend a full council meeting in the new year to explain to the town why it was that a unilateral undertaking given by the original developers (Sunpower) was not signed once permission had been given, and why the town council was not informed at the time of the change in circumstances."
The town council voted to oppose the application and requested that Cornwall Council's strategic planning committee do the same but the farm went ahead.
The Haye Road Solar Farm application was granted at a second Cornwall Council strategic planning committee meeting in 2011 by eight votes to seven.
Inazin account manager Stuart Homewood said: "In July 2011 the UK Government significantly cut the Feed-in Tariff scheme to 8.5p per unit from 29.3p per unit – a reduction of more than two thirds towards renewable projects.
"This halted all development activity for a period of time as it made almost every scheme proposed uneconomic.
"In response to this we, along with other developers, engaged with Cornwall Council, led by Adrian Lea, to establish a more realistic payment to communities following such significant subsidy reduction – our new proposal is as per this agreement.
"Finally, this year, we have managed to secure funding for this scheme at Callington based on the Renewable Obligation Certificate scheme (ROCs) and are currently in construction."
Community 'short-changed by £600,000' over solar farm | This is Cornwall
.
.
.
Posted by Jeremy Woodward at 09:38