Feniton "has been central to the greatest storm yet to burst over the way the Government’s flawed planning policies are allowing builders to 'lay siege' to rural England."

Following on from the front-page story in the Telegraph this week:
Futures Forum: "A former minister said that communities trying to resist building in the countryside are 'under siege'."
Geoffrey Lean of the Telegraph has penned this piece this morning:

There may seem nothing particularly special about the east Devon village of Feniton, which has stretched out drowsily over the past 150 years around a railway junction established to service the Victorian resort of Sidmouth. But this week – just as it has been mopping up after rains that have repeatedly flooded houses with diluted sewage – the village has been central to the greatest storm yet to burst over the way the Government’s flawed planning policies are allowing builders to “lay siege” to rural England.
Downing Street was rocked when one of its own trusties – the Stratford-upon-Avon MP, Nadhim Zahawi, who serves on the No 10 policy board – denounced “rapacious developers” using the policies to “short-cut the planning process”. He warned – as reported in Thursday’s Daily Telegraph – that if the practice continues, “the physical harm it is doing to our countryside will become the defining legacy of this Government”. And other MPs from five parties described how the “free-for-all” is swamping village after village with big new housing estates.
Certainly the people of Feniton – as their parish council chairman, Martyn Smith, puts it – are “baffled and angry”. Under locally drawn up plans, they were due to get 35 more houses to meet their needs, but they now face another 235, in three simultaneous developments. If these go ahead, the village will grow not by the planned 5 per cent but by 42 per cent, a jump unprecedented in the area. The builders insist that the developments will be sustainable, but this week the parish and local district councils have told a planning inquiry that the village’s schools are already full, that its surgery will not cope, and that its narrow lanes will be clogged by the increased traffic.
Views will be ruined and good agricultural land lost, they added. But it is the flooding that has, in villager Val Jones’s words, “united us in fury”. Feniton has been flooded three times in less than three weeks, with water gushing from sewers as the drains could not cope (official advice was “not to use the toilet”), following inundations in 2012 and 2010. The developers say they will take measures to reduce flooding, but the people believe that so much extra housing will worsen things.
Under Local Plans, the village should be one of the last places in east Devon to face major development and, by rights, that should be enough to defeat the developers. But the cards are stacked in their favour. For the plans, though completed, have yet to be approved by Whitehall, while the council has not yet managed to set aside enough land to provide for six years of housebuilding. And, under the Government’s planning policies, developers can build just about wherever they like until those two conditions are met. Mr Smith accuses them of being “opportunistic” in exploiting a “temporary” moment of defencelessness. Mr Zahawi says the practice leads to “bizarre levels of proposed development”, citing a village in his constituency facing six times its planned annual housing increase. Other MPs of all persuasions from all over the country queued to tell their own horror stories in the Commons on Thursday.

David Heath, a former Lib Dem minister who has, like Mr Zahawi, long been a supporter of the planning policies, described how the village of Norton St Philip in Somerset is “under siege” from seven housebuilding applications. Jason McCartney, a Labour MP, spoke of five villages in the Colne Valley being “pounced on” by developers. And Tory Sarah Newton cited “a huge number of speculative planning applications” in Cornwall. Indeed the Campaign to Protect Rural England has counted more than 30 major developments that have gone ahead contrary to Local Plans.
Similar alarms have been sounded so often before that Nick Boles, the planning minister, described the debate as a “Groundhog Day experience”, adding that he was “absolutely sure that this is not the last time” he would have it. Even so, he offered little hope of closing the loopholes that are enabling the builders to run riot. Meanwhile, Downing Street says Mr Zahawi must retract or resign from the advisory board.
The builders’ behaviour is likely to have serious consequences, and not just for the countryside. The Tory MP Andrew Bingham points out that people’s faith in democracy is being undermined. No wonder when – as Labour member Tom Blenkinsop puts it – planning control is taken from communities and effectively handed to builders.
Even some developers say this is wrong: Peter Andrew, group land and planning director at Taylor Wimpey, says that having builders “determining councils’ land allocations for them” is “no way to run a planning system”, adding that “a robust democratic system” is needed.
So why is a Government supposedly committed to localism being so, apparently wilfully, blind?

For more context, click on this map produced by the East Devon Alliance: 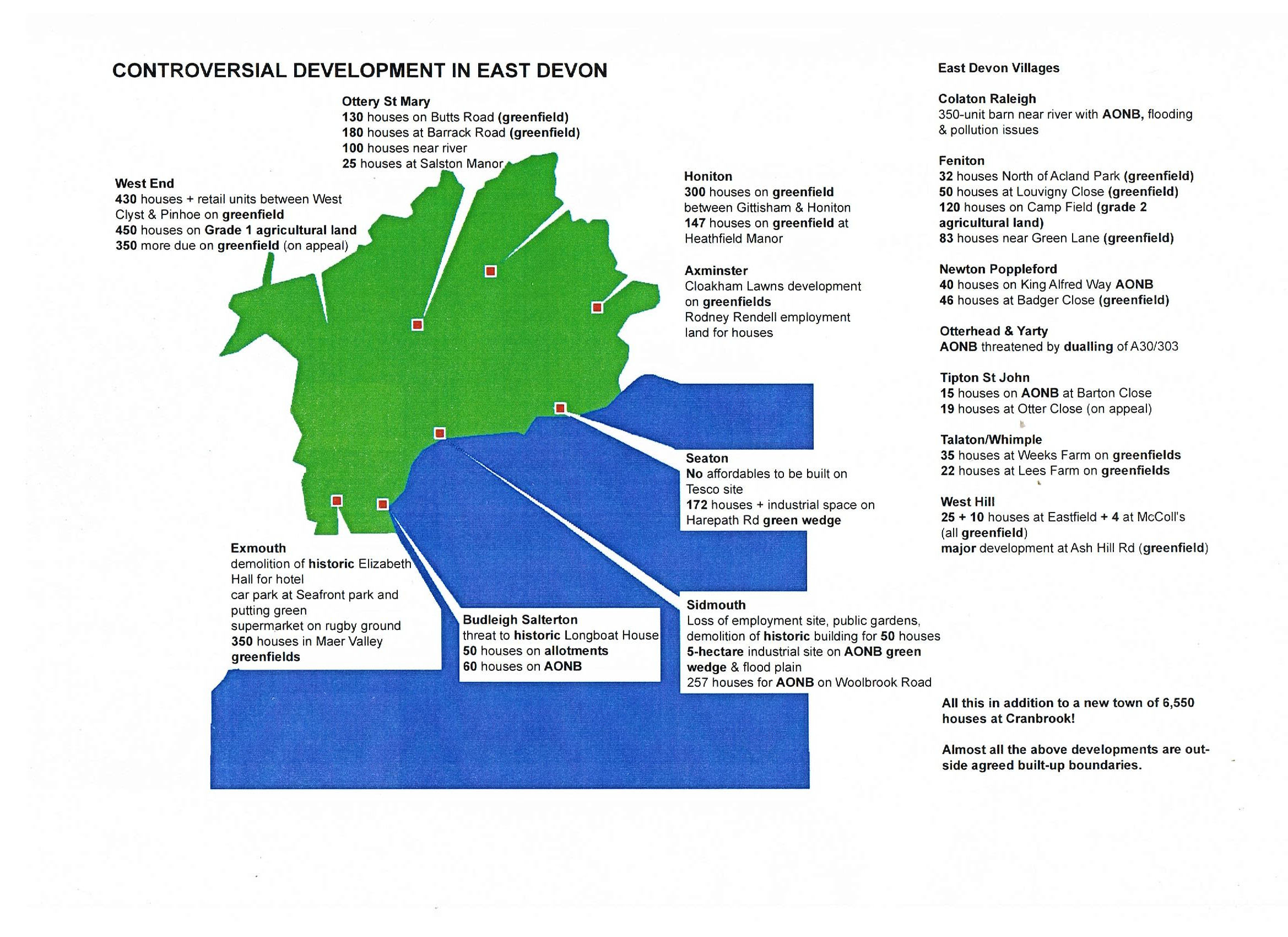 For an overview of East Devon’s disappearing greenfield and AONB sites, see the map kindly sent by the East Devon Alliance.

Daily Telegraph’s Geoff Lean picks up the Feniton case, on the morning of the protest march. | Save Our Sidmouth
.
.
.
Posted by Jeremy Woodward at 07:40