It was originally a 'flat-pack' chapel, which could be bought from a department store catalogue at the turn of the century for £125 (or £13k in today's money): 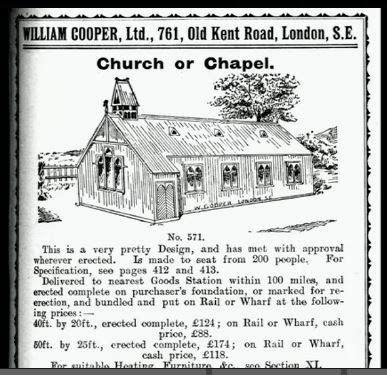 INNOVATIVE LIVING: Hive Haus
By Jess Owen
Most architectural designs pale in comparison to complex structures like the Petronas Tower or the Sydney Opera house but Barry Jackson, of Wigan, has shown that simplicity trumps all.
Builder Barry, 50, owner of Hive Haus, has put hammer to wood and designed a housing alternative that may be the future of affordable housing.
His hexagonal honeycomb structure was featured on last night episode of Channel 4's programme George Clarke’s Amazing Spaces, and MM got the chance to pick his brain after his recent foray into television.
“We have had so much interest since last night.  Our website went from 100 hits to 6,000 just after the programme aired and we have been inundated with emails,” he said.
And it is not hard to see why. Barry’s prototype combines elegant simplicity with absolute efficiency without losing an of ounce creativity. The structure consists of identically proportioned hexagonal cells which can be added to.

The beehive, as it is affectionately called, has the capability to grow to the owner’s requirements allowing for bespoke pods.
The pods sell at a measly £10,000 and due to their status as mobile homes, require no planning permission.
Barry said of his ingenious design: “The bigger you go, the less money it will cost per pod as you reuse walls.”
Originally designed as a garden office, this design is the height of efficiency with solar gain and the flexibility to suit every owner in every stage of their life and yet the simplicity of this design is hard to grasp. “Friends have told me they can’t believe they haven’t seen it before, it really is simplicity at its best,” he said.
More importantly Barry’s design offers a practical rebuttal to the housing issues in this country. He said: “Housing is a difficult issue right now and it’s shockingly expensive for young people.
“This design could be it for first time buyers. The magic of this design is that it can be adapted to suit people and their needs. The pods could even work as elderly people’s homes as they are cheap to run, cheap to own and easy to clean.”
Hive Haus: The future of housing and alternative to high cost homes?

Meanwhile, Channel Four's other design champion has a new project on the Somerset coast:

Kevin McCloud’s new house may not be a grand design, but it’s certainly a cunning one.

Recycled residence: the Man Made Home of an earlier series has been transformed into a West Country seaside retreat, reusing all manner of objects, including a telephone box that functions as a shower  Photo: Christopher Jones

You don’t so much visit Kevin McCloud’s new seaside home as step on board. Perched on a Somerset clifftop, his self-constructed cabin has a distinctly nautical look, with unmistakably ship-shaped decking and a long, pointed prow that juts out over the sea.
However, it’s not just Noah and King Neptune who have been the inspirations behind this latest Maison McCloud. The Wombles, too, have had a big hand in the design, since every element of this West Country property is made out of something that everyday folk have left behind. Or, in the case of the little, square passenger windows that make up the conservatory, things that everyday aircraft operators have thrown away.
He took the hut that he built out of local oak for the television series Kevin McCloud’s Man Made Home, moved it to the seaside and enlarged it. The extension was constructed over the summer and cost about the same as the original . Forget the £500,000 West Country holiday home, and think more £5,000 – with sea views thrown in.
“The emphasis here has been on recycling, on finding a viable use for all sorts of things for which there might not be an immediately obvious use,” says the Grand Designs presenter, cooking breakfast on top of a hollowed-out cauldron that used to be half of an unexploded Russian mine.

Or you could try a little something along the Jurassic Coast:
£1.7m beach huts on market | Mail Online
.
.
.
Posted by Jeremy Woodward at 04:16