In terms of what is more a 'efficient' source of energy on a local scale
Futures Forum: What are the most efficient forms of energy.. at a local level?
it is clear that solar, wind and possibly fracking look promising
- because it's all about local control of energy production and distribution.

39 Comments
Three millennia ago, near the spot where St George reputedly slew the dragon, ancient Britons dug deep trenches and filled them with crushed chalk to craft by far the country’s oldest white horse.
Now, down in the broad flat Oxfordshire valley beneath both the 374ft long, stylised figure at Uffington, and the neighbouring Dragon Hill, the ground is being dug again to create the area’s most dramatic man-made landmark since the Bronze Age bronco was carved out.
Some participants in today’s passionate energy debate see the new £37 million structure as a white, not horse, but elephant. Others regard it as heralding a new technological revolution. For the project, which began this month at Landmead Farm, near the village of East Hanney, is to create Britain’s biggest solar farm. When it is completed, in April, it will cover some 200 acres with solar panels.
Another vast photovoltaic array started operating just before Christmas on more than 140 acres of the farm next door. Another is under construction in the next village, Steventon. And this week developers publicly presented plans to build yet another, three and a half miles away at Grove.
Indeed, says Helen Marshall, Oxfordshire head of the Campaign to Protect Rural England (CPRE), six are proposed with a few miles of each other, “changing the landscape of the Vale of the White Horse into a giant solar park”. In all, she adds, 15 solar farms in the county have already got planning permission, with another 29 pending.
It’s much the same over the border in Wiltshire, where 22 sites have been earmarked for arrays in just the Western half of the county, six around the ancient village of Seend alone. Even more are planned in Cambridgeshire and Dorset. And the solar rush extends from Norfolk to Wales, from Romney Marsh to – however improbably – Aberdeen.
It’s all happening very fast. Back in 2010, says the Government, there were only 33 planning applications for solar farms in England; in the first nine months of last year alone, there were 278. Nobody seems to know how many have gone ahead, but the industry reckons there will be about 150 big ones in Britain by the end of March, and that capacity will more than double over the following year.
That’s even faster than the relentless expansion of wind power, and poses similar risks, not least that the shine may come off Britain’s most popular source of renewable power. Indeed, with protests against fracking erupting across the country, we seem simultaneously to be mismanaging the exploitation of three key decentralised energy sources.
Certainly, the political temperature is rising on solar, as with the others. Parliament will debate the issue on Wednesday on the initiative of Tory MP Brooks Newmark, who is fighting an installation on the edge of Constable country in his Braintree constituency. And the CPRE has launched an internal review of its policies, amid fears of a developing “free-for-all”.
But it need not be like this. The sun – when it comes out – shines everywhere, on wasteland as well as beautiful countryside, on flat rooftops as well as green fields. And though there are some shocking examples – including in Areas of Outstanding Natural Beauty and National Parks – other solar farms are enthusiastically supported. Mr Newmark himself hails one on a disused airfield in his constituency, at Gosfield, and there are similar, widely praised schemes on redundant runways at Wymeswold in Leicestershire and West Raynham in Norfolk, and at business parks.
The solar industry is trying to get firms to observe “10 commitments”, including avoiding protected areas and good agricultural land, prioritising brownfield and industrial sites and screening installations with trees and hedges. And it is working with conservation groups to introduce wildlife to what was often monocultural farmland along with the panels; grey partridges, wildflowers and bees flourish, for example, amid the structures at Wilburton, Cambridgeshire.
Ministers have sworn to fight “monster solar farms” and said that development should be focused on previously used land – and on roofs. At present only three per cent of Britain’s sizeable solar installations are on large roofs, compared to 51 per cent in the rest of Europe, because the subsidy system effectively discourages putting panels on these ideally out-of-the-way locations.
That must change, and over-simple, over-permissive rules, brought in by the Government’s controversial planning reforms, need to be tightened. Communities must be given a real stake in solar farms, as well as in wind and fracking operations; all the evidence shows that local people tend to support enterprises in which they share ownership, and object to those imposed on them.
It’s early days for solar, in what will be an epic battle with fossil fuels over the next decades. But the industry needs to be sure that its role remains that of the saint, not the dragon.
Make solar power pay while the sun shines - Telegraph

An application for a solar farm at Sidbury was turned down recently...
but the applicants hope to try again:
Futures Forum: Solar farms in East Devon... an approval at Exmouth... and a new application at Sidbury.....
Lumicity Ltd -

It seems to be very much a question of 'giving communities a stake':
Futures Forum: SidEnergy latest: Power in the Community
Futures Forum: "Community energy offers a long-lasting solution that protects against ‘big six’ price rises and pumps money back into local areas.”

But 'giving communities a stake' means profit-sharing:
Community solar farm - Wikipedia, the free encyclopedia
For Renters, Solar Comes in Shares - NYTimes.com
Brixton Energy | Power to, for and by the people! 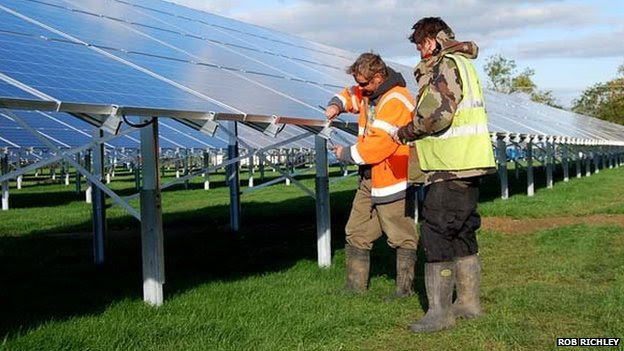 Installation work to fill two paddocks in a Somerset village with "community-owned" solar panels is almost complete.
The £1.1m project to develop two micro-generation sites on farmland in Wedmore has taken less than a year to come to life.
Wedmore Community Power Co-operative said the 4,000 panels should be feeding power into the grid within a month.
In 1908, the village became one of the first in Somerset to enjoy the benefits of electricity.
The Wedmore Electric Light and Power Company had been set up by local man William Burrough and villagers were generating their own electricity 16 years before the city of Wells nearby.
Over a century later, and the Wedmore Community Power Co-operative has sold shares in the solar site to 125 members through an offer to raise £950,000.
The money was needed to make the project a reality. However, more than £300,000 is still to be raised.
The co-operative says the one-megawatt plant, which is situated off Quab Lane, will generate the same amount of electricity as 300 typical domestic solar arrays.
That electricity will be fed into the National Grid.
Work to install the panels was expected to be completed earlier but bad weather has delayed proceedings and installation should now be complete by Monday.
BBC News - Wedmore village has 4,000 solar panels installed
Wedmore Solar Farm - Wedmore Community Power Co-operative
.
.
.
Posted by Jeremy Woodward at 08:27