A challenge from a Bristol company to the 'big six':

Our founder Stephen didn’t come from an energy background – so he didn’t start with set ideas of how things are ‘normally’ done. Just a vision of how things should be done – as a customer.
Average savings of £139 a year – and a fair price pledge
Our prices are directly linked to the energy wholesale market (you pay us in advance so we can buy it there in advance), and we keep our running costs low. It’s things like this that help us give you the lowest possible prices. That’s what our fair price pledge is all about too. We guarantee you’ll always be offered the very best energy price we’ve got when you choose us. Whether you’re brand new, or with us for years. 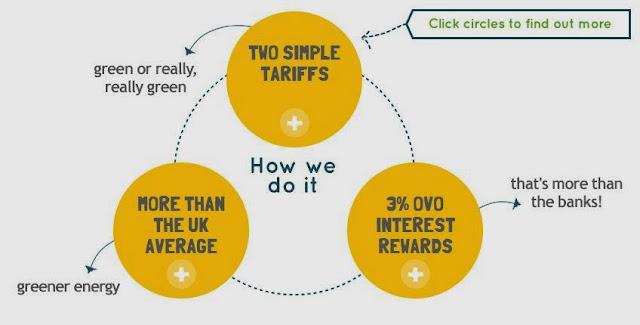 How we could all get better deals on our energy bills | Stephen Fitzpatrick | Comment is free | theguardian.com
Energy firms 'overcharge by £3.7bn a year' | Business | The Guardian

Stephen Fitzpatrick at OVO's Bristol office. Photograph: SWNS.com/David Hedges
The last 12 months have been terrible for energy executives, who have replaced banking bosses as public punchbags on the back of soaring fuel prices and fractured trust.
But one electricity entrepreneur, Stephen Fitzpatrick, came out on top by publicly demolishing the carefully choreographed excuses for bill rises proffered by the big six power groups.
Now the biggest problem for Fitzpatrick's business, Ovo Energy, is how to deal with the 20,000 new customers who have flooded in since his dramatic intervention at a parliamentary select committee meeting in October.
The 36-year-old Ulsterman said: "We had been very focused on 2013 as a year of consolidation. The worst thing that a company like ours can do is grow too quickly, which can lead to service levels dropping. To be honest we were caught by surprise.
"This is the third time I have made these kinds of remarks, but in the past no one noticed. This time brand awareness has shot up and it has translated into immediate new business."
Ovo, however, had already planned a big push for new customers in 2014 and invested in staff and technology over the last 12 months in preparation.
The company has a strategy of developing the nascent online energy supplier (named after the Latin for egg) from the current level of 150,000 customers to a total of 1 million within four years. Compared with the almost 8 million households who buy from British Gas, this is still small.
So Christmas came early for Fitzpatrick, the son of a Belfast greengrocer who studied business at Edinburgh University, became a City trader and then turned IT entrepreneur.
He admits he had no prior experience of the energy sector before setting up the Bristol-based business in 2009. But Ovo's turnover has risen from £80m to £210m in less than two years.
And being a newcomer did not mean he was loth to speak out, as the select committee on energy and climate change found when it called him to give evidence two months ago.
Most of the big six suppliers had sent less senior executives to face the MPs. The energy executives claimed at the committee to have reluctantly imposed price rises of 10% because of government imposed green taxes and other social burdens.
But Fitzpatrick broke ranks by saying that the large conglomerates charged as much as they thought they could get away with, leaving their customers struggling with fuel poverty.
"I can't explain any of these price rises," he told the committee's MPs. "They [the big six] load the environmental and social obligations on to those customers who are less likely to leave. A lot of energy companies are charging the maximum price they feel they can get away with."
He also ripped into the energy regulator, Ofgem, for allowing the powerful energy companies to dominate both the wholesale side and the retail side of the British energy market.
Fitzpatrick went on to accuse Centrica-owned British Gas of running a dedicated win-back team whose job was to call leaving customers and offer to cut their bills.
Two months on, the former trader of credit default swaps at JP Morgan may not be impressed by the state of the energy market but he has little time either for the various fixes that have been proposed by Ed Miliband.
The Labour leader made energy a hot political topic by pledging to freeze prices if his party won the general election and to break up large companies such as SSE and British Gas.
Fitzpatrick said: "It is obviously good that people are now talking about the issue but the price freeze is a slogan, not a policy. We need to see a lot more detail on this energy policy and until we do so it just creates a lot of uncertainty."
He thinks the biggest reason for the lack of power generation facilities being built is not uncertainty but the lack of cash held by the big six.
He said: "This is a capital-intensive business but if you look at most of the big six they have very stretched balance sheets.
"RWE has huge debts, Iberdrola [the multinational owner of Scottish Power] is highly leveraged and they are very challenged in their home markets [Germany and Spain]."
The French state-owned EDF is the only big six member to have experienced some success in the UK this year, tying up a 35-year subsidy package to fund the Hinkley Point C nuclear power plant in Somerset. But Fitzpatrick describes this nuclear option as very expensive for the government and consumers.
Yet the biggest problem for the big six, he maintains, is that the interests of the companies are not aligned with the interests of their customers.
"People need to be reducing their usage and demand for energy, yet the large companies make money by selling more power. If what's best for your customers is bad for your business, you are living on borrowed time.
"By contrast we want to make money by doing what is best for customers. Whether that is through providing energy efficiency schemes or smart meters, there are lots of ways to help."

Great Info. Thanks for sharing.