Climate Change: "It appears the more carbon we emit, the less we want to believe we’re contributing to the problem."

Following a new poll by Ipsos Mori on people's attitudes to climate change, there have been different interpretations of the data:

75 per cent of people believe it's wrong to say human activity is not significantly affecting the climate - and most believe the benefits of tackling climate change outweigh the risks, according to new polling. We take a look at what the new data says about UK attitudes to climate change
Humans are the main cause of climate change
Data from Ipsos Mori's Public Attitudes to Science 2014 collected data from 1,740 adults UK-wide aged over 16 and a booster survey of 510 16-24-year-olds. It shows only 14 per cent of people think human activity does not have a significant effect on the climate. In contrast, three quarters of respondents say they disagree with that statement. This attitude appears to have changed little since the survey was last conducted in 2011. 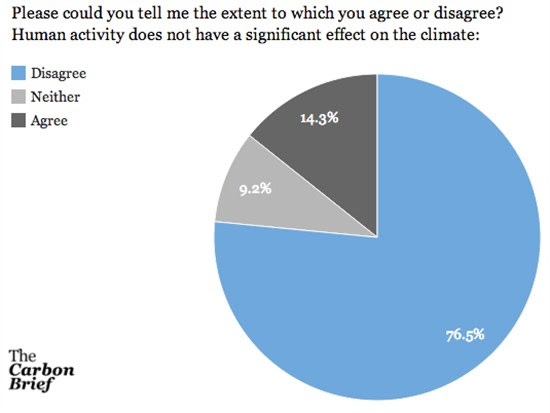 
Following on from their look at the IPCC report:
Futures Forum: The impacts of climate change are “severe, pervasive and irreversible” says the latest assessment from the IPCC.
here is the take from the New Economics Foundation on the Ipsos Mori poll:

Last month we published a paper revealing how forecasts from the Intergovernmental Panel on Climate Change (IPCC) have consistently out-performed major economic models used by governments in policy-making. The message was clear: climate science is proving reliable. Those overblowing the uncertainties need to find a new intellectual-sounding excuse for delaying climate action.
The paper set me thinking about the root causes of climate scepticism. If not science, what is stopping people from supporting action on climate change. A telling pattern emerges when you look at how scepticism levels vary from country to country.
According to data from Ipsos Mori, climate scepticism appears closely linked to emissions per capita – an individual’s contribution to the problem.  Scepticism is most widespread in countries like Russia, Australia, the UK and the US, where per capita emissions are highest. Here, 24-32% disagree that humans are causing climate change, whereas in China, Argentina, Italy and Spain at the other end of the spectrum, only 6-13% are sceptical.

It appears the more carbon we emit, the less we want to believe we’re contributing to the problem. Could it be that climate change scepticism comes not from a denial of the scientific certainty, but denial that any issue should require a shift from a comfortable lifestyle.
If so, then the final installment of the IPCC’s 5th Assessment Report that came out on Sunday is of huge significance for those trying to push on with climate action. What their analysis shows is that, despite dramatic headlines, averting catastrophic climate change need not cost us our living standards.  It is affordable and can be done by acting quickly to phase out fossil fuels and ramp up generation from renewable and low-carbon energy sources. Believing in climate change and the need for action does not (as sensational commentators are so fond of arguing) equate to wanting to dismantle our economy or rewind to Stone Age ways of living.
Could this more hopeful outlook open more people’s eyes to the reality of the challenge? I hope so. After all, as the effects of climate change set in around the world, billions of people no longer have the luxury of denial. And they are almost exclusively those who have contributed least to the problem:

So let’s get real, and let’s get creative. The IPCC’s latest report offers much needed authority to the view that climate action and prosperity can go hand in hand. Now it’s up to us to prove it.


Here are some of the findings from the Ipsos Mori poll: 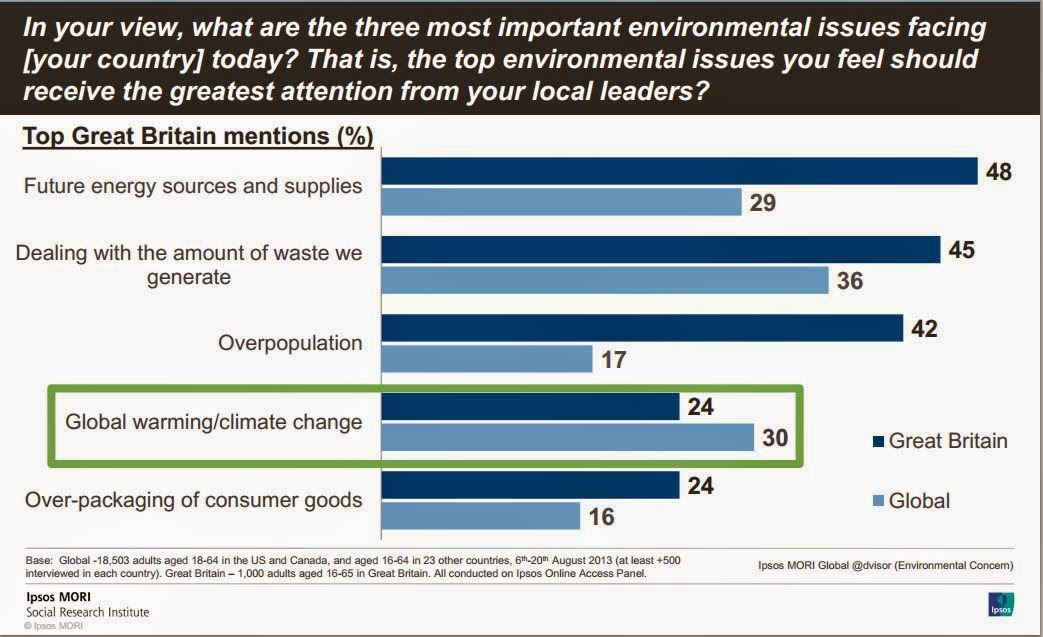 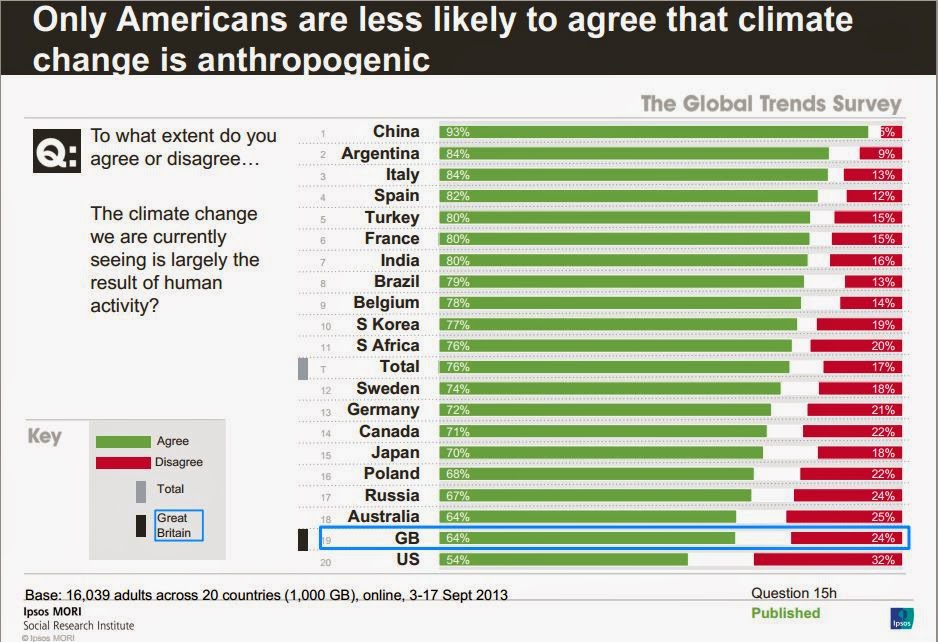 www.ipsos-mori.com/DownloadPublication/1658_SRI_Climate_risk_adaptation_SRA_presentation.pdf
.
.
.
Posted by Jeremy Woodward at 14:57