... DCC have complied with the Inspector's request to modify the Definitive Footpaths Map covering the Knowle parkland:
Sidmouth


Footpaths at the Knowle

Devon County Council, the Highways Authority, have made a modification order to include 3 lengths of footpath at the Knowle onto the Definitive Footpaths Map. This will finally confirm them as public footpaths.

This is the latest stage in a long saga to try to get footpaths at the Knowle recognised as public footpaths. It follows an application by local residents in May 2012, following which EDDC suddenly erected notices to say that they had no intention to dedicate any rights of way. EDDC objected to the application by the local residents and the application was rejected by Devon County Council. However, the Residents appealed to an Inspector appointed by the Secretary of State who found that there was evidence that the public had been using the footpaths. The Inspector directed Devon County Council to make a modification order to include the footpaths (other than those on the public open space which the public already have a right to use) onto the Definitive Footpaths Map. This is the order which Devon County Council have now made and advertised.

There is, however, a right to object and we wait to see whether EDDC will continue to fight the local residents and submit an objection. Any representations or objections have to be sent to Devon County Council by 9th May. (Please see public notices on site or in the Sidmouth Herald for full details).

Footpaths at the Knowle | Save Our Sidmouth

An interesting take from the SIN blog from last year:

Some extraordinary statements are contained in this week’s press release from East Devon District Council, following the Inspector’s report on disputed footpaths (see Knowle footpaths appeal decision | Save Our Sidmouth). SIN is particularly surprised by EDDC’s two comments quoted below, as the SIN pics archive seems to tell a different story.

1. EDDC press release: “The Council has always stressed its intention to retain a significant proportion of the parkland at Knowle for public use…”

SIN archive: Aerial view of EDDC’s original plans for Knowle, rejected in May 2013. The accessible parkland remaining would have been on a sloping site, notoriously wet, away from the finest trees…and largely unsuitable for prams or wheelchairs, etc. 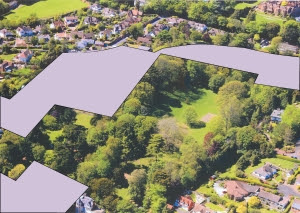 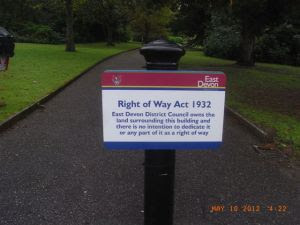 …..and of course, you’ll remember the ribbon fairy caught in flagrant delit on the day of the Mass March?
Ribbon fairy at Knowle? | Sidmouth Independent News

Do actions speak louder than words?.