Sidmouth has a long tradition of charitable fund-raising - especially in the area of health care:


Sidmouth Lions Club have presented a cheque to charity following a successful fundraising concert at The Manor Pavilion Theatre, featuring the Sidmouth Town Band and the Sidmouth Gospel Choir. The concert, held in February, was primarily in aid of a Hospiscare Appeal, to fund the construction of the new day hospice for East Devon.

Sarah Smith, Hospiscare Appeal Fundraiser, attended a Sidmouth Lions Club meeting to receive a cheque for £1,000 to go towards the cost of the new building in Kings Street, Honiton.

Expressing her thanks on behalf of Hospiscare, Sarah said that the site of the new day hospice should be cleared within the next fortnight, and it is hoped that the building work will be completed by early Autumn this year. Once completed, the day hospice will provide care for terminally ill people from all over East Devon and also some respite for their carers.

PICTURE: Cheque presentation to Sarah Smith by Sidmouth Lions President, Lion Graham Rossiter, in the company of other members of the club.

The front page of the latest Herald reported the generosity of Sidmouthians:

£4.5m boost for our hospital
And it's YOU who've raised the money!

Generous Sidmouth residents have been hailed as 'truly marvellous' after the commun9ty helped raise £4.5 million to fund a complete renovation of the town's hospital.

Some 25 years have passed since the Sidmouth Victoria Hospital Comforts Fund was set up with the aim of upgrading the facility for the 21st century.

And, at the group's annual general meeting last Thursday, Chairman Graham Vincent formally closed the fifth and final phase of fundraising after an appeal netted £225,000 in just 17 months.

He said: 'Nearly all the money has come from the local community, to which we are very grateful. Over many years, local communtiy hospitals have been at risk of closure - Sidmouth hospital has been upgraded with local finance.'

However, a story on the inside pages of the Herald warns about the reduction in health services:

Civic leaders have pledged to ensure Sidmouth residents have the 'best possible healthcare' as the provision for older people faces massive cutbacks.

Devon County Council is reviewing its role as a provider as it looks to slash £110 million form its budget over the next three years - which could spell the closure of Sidford's Green Close, writes Stephen Summer.

Sidmouth Older People's Mental Health Forum representative Ian Skinner told town councillors on Monday that budget cuts will affect patients and carers alike and asked them to consider other options for the centre.

The rather prurient story in the Herald about a person 'with mental health issues'
Bus flasher is spared jail - News - Sidmouth Herald
highlights the general 'issue' of mental health in Sidmouth and beyond.

Several years ago saw the reduction of psychiatric care and the introduction of 'care in the community'
From the asylum to community care: learning from experience
which many saw as a simple means of cutting costs rather than actually giving support to sufferers in their communities:
Community Care: The Sham Behind the Slogan: National Schizophrenia Fellowship: 1984
A report from 2008 concluded that the cost of caring for patients with dementia and mental health problems would increase - the problem being how to provide for this:
www.kingsfund.org.uk/sites/files/kf/Paying-the-Price-the-cost-of-mental-health-care-England-2026-McCrone-Dhanasiri-Patel-Knapp-Lawton-Smith-Kings-Fund-May-2008_0.pdf

With the current shake-up of the health service, there is the question of whether this amounts to 'the liberation of the NHS':
Equity and excellence: Liberating the NHS - News stories - GOV.UK
NHS white paper: liberating the health service? - Channel 4 News
or threatens the provision of services:
38 Degrees | Blog | Poll Results: Hospital Closure Clause
38 Degrees | NHS England give us transparency

It is a question of language - and fundamentally a question of political perspective.
> Should healthcare be a matter of provision by the state through taxation or through private donation?
> And should the care be administered from a central coordinating authority or through local bodies?

And which system is the most 'efficient' in terms of spending funds most effectively?
The model does not appear to be the United States:

The NHS is Europe's largest state bureaucracy with the resulting inefficiencies:

"They were failed by a system which ignored the warning signs and put corporate interests and cost control ahead of patients and their safety,” he added. “There was a lack of care, compassion, humanity and leadership. The most basic standards of care were not observed, and fundamental rights to dignity were not respected."

Hospital Report Cites ‘Appalling’ Suffering in Staffordshire - NYTimes.com
One in four NHS staff is now a bureaucrat | Mail Online
Box-ticking bureaucrats are crippling the NHS... we must give life or death decisions back to doctors Leading surgeon pleads as he leaves the health service after 30 years | Mail Online

But the health service in the UK does seem to deliver well:

What other countries are copying from Britain's NHS 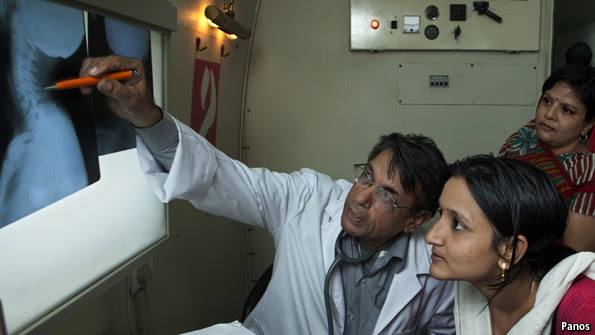 IN BRITAIN arguments about the standards and efficiency of the National Health Service (NHS) can seem never-ending. The past year has been particularly bad: the system founded in 1948 by Aneurin Bevan, a Labour politician, has seemed to lack consistency and quality, and has been mired in scandals involving the neglect or mistreatment of hospital patients. The service is also struggling to meet a £20 billion ($33 billion) target of "efficiency savings" required to keep it within a budget which accounted for £105 billion in public spending in the year 2012/2013. Against this it might seem odd that many other countries—especially fast-growing ones in the developing world—are copying the NHS and importing some of its key ideas to help transform their health services. In particular, governments with large populations demanding rapid improvements on tight budgets are looking to Bevan’s brainchild for inspiration.

Just because it is regarded as a model abroad does not mean that the NHS can be complacent at home, however.
> Its emphasis on scale and equality of access has made it slow to adopt innovations that can benefit patients.
> Uniformity of treatment is often more theoretical than real: a belated attempt is now being made to open up more data on successes and failures in order to drive improvements in performance.
> And a continuing ideological spat about how much the NHS should co-operate with the private sector holds back potentially beneficial changes, as does the wide variation in the quality of its management.

But its principle of service for all is an aspiration shared by many countries anxious to turn rising GDP into better health outcomes. That is not a bad legacy for the NHS, nearly six decades after its birth.

The Economist explains: What other countries are copying from Britain's NHS | The Economist

And yet, according to the think-tank Civitas, the UK could be looking towards Sweden and its 'localist' health service:


Healthcare Systems: Sweden & localism – an example for the UK?

Swedish healthcare is financed from general taxation, heavily subsidised at the point of use and has traditionally been almost entirely publicly provided, thereby creating some basic parallels between the current British healthcare ethos and that of Sweden. However, in two crucial respects, the Swedish national healthcare system differs from the British NHS.

The main difference between the two is the longstanding Swedish commitment to subsidiarity (matters must be handled by the lowest authority capable of handling them effectively) and therefore to a localist rather than centralist approach to the delivery of healthcare, and of public and welfare services in general.
In Sweden, both financing and provision lie with the regional and municipal levels of government, whereas the NHS still tends to be characterised by central control and a lack of clear lines of accountability between voters and the health service below the Westminster-Whitehall level.
Defenders of this system in Sweden argue that keeping the management of the system in closer proximity to voters and users in this way creates greater responsiveness and accountability, driving up service quality and strengthening public ownership and willingness to pay for quality health services.
Further, although Sweden has historically shared this local governance model with the other Nordic nations, it has so far largely rejected ‘re-centralisation’ reforms on the scale now being pursued in neighbouring Denmark and Norway, perhaps fearing that the Swedish system’s treasured efficiency and accountability would be lost if it were to follow suit.
Civitas: About Us
www.civitas.org.uk/nhs/download/SwedenBrief2013

Where for Sidmouth, then? What appears to be happening on the ground - with initiatives, projects and campaigns - is a form of 'civil society' in action.
To quote from another group:

"We believe that the NHS needs to access the strengths of civil society to do its job in the 21st century. To cope with the changing disease burden and growing financial pressures, the NHS needs to take advantage of the broad range of capabilities of this sector. It needs to listen to and understand patients’ lives; it needs to enable patients, families and communities to support their own health; and it needs to coordinate care with the powerful informal networks that surround individuals. Without the support, cooperation and engagement of civil society, this will not happen. Housing associations, charities, social enterprises, and community groups all have an important role to play."