"Smart growth for conservatives" at Resilience

Following on from
Futures Forum: Resilience: "building a world of resilient communities"
Futures Forum: "Resilience, impact, and learning" ...interview with Katrina Brown of the Environment and Sustainability Institute at Exeter University
here is a very relevant view from 'The American Conservative' website - via the 'Resilience' website:

by William Lind, originally published by The American Conservative  | APR 21, 2014 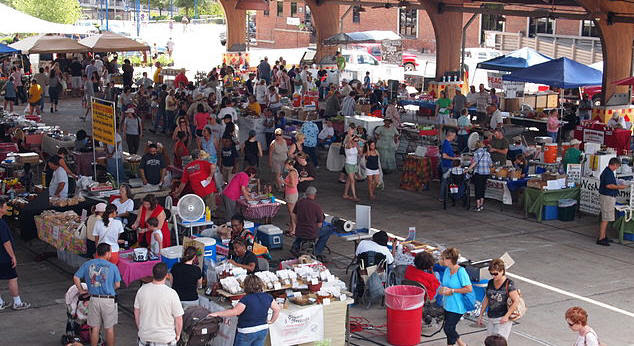 Shreveport Farmers' Market, one of the largest farmers' markets in the State of Louisiana  (photo via Wikimedia Commons).

Smart Growth for Conservatives, a new initiative undertaken by James A. Bacon, distinguished conservative author and publisher of the popular Bacon’s Rebellion(http://www.baconsrebellion.com/), is something we welcome. For conservatives, smart growth means recapturing good things from the past that our country has partially lost, namely traditional towns and neighborhoods as alternatives to sprawl suburbs.
There are three main reasons why we favor bringing back those older ways of living. First, as conservatives, we know old ways, ways that evolved over many generations of man’s experience, generally work better than new ways. Conservatives are not ideologues. Rather we favor what has grown bottom-up, over time, and is embodied in customs, traditions, and habits. Until the post-war building codes were enacted, people were not so rigidly segregated where they lived from where they shopped or from where they worked, by distances too great to walk. It was a mistake to do so, as most departures from long-standing practices are mistakes.
Second, as conservatives, we prefer what is beautiful to what is ugly. Much sprawl development is ugly, especially automobile-driven “strip” development. When we compare what our country looks like today with what it looked like a hundred years ago, when the neo-classical City Beautiful was in full swing, it is obvious we have taken the wrong road instead of the right streetcar.
Third, conservatives place a high value on community, and traditional towns and neighborhoods foster community better than does suburban sprawl. Why do we desire community? Because traditional morals are better enforced by community pressure than by the clumsy and intrusive instrument of the law. But community pressure only works where there is community. If you do not know your neighbors, what do you care what they think? We want people to care what their neighbors think.
Smart growth for conservatives ties in closely with what this website advocates, namely better public transportation in the form of streetcars, interurbans (light rail) and passenger trains. Like towns and livable cities, these are good things from the past whose loss we lament. We want to bring them back.
How does conservative smart growth differ from liberal smart growth? It differs in two major ways. First, conservatives reject the Left’s love of “diversity,” mixing races, ethnic groups, income levels, and cultures in ways where everyone must live cheek-by-jowl. Why do we reject it? Because diversity undermines community. Communities form more easily where people are most similar. Community, for us, is far more important than any putative benefits from “diversity,” benefits that seem entirely ideological in nature.
Second, while liberals strive for smart growth through more and more detailed government regulation (think Portland), conservatives want a free market on a level playing field.
The present near-universal sprawl codes radically tilt the playing field, because anyone who wants to build according to traditional neighborhood designs (TND), which we see as central to smart growth, must get a slew of variances to do so. One developer told me that to build one small TND project he had to obtain 150 variances. Each cost him time and money. This is not a free market situation.
The solution is simple: dual codes. A developer should be free to choose to what code he wishes to follow, a sprawl code or a TND code. He will decide on the basis of his estimation of the market. We are confident that many will choose the TND code, yielding smart growth. Why? Because most TND housing projects sell at a substantial premium over the same floor space in nearby sprawl developments. People like the old ways, and when they see them in the form of towns and neighborhoods, they want to be a part of them. They want to live there.
A few years ago, Paul Weyrich, Andres Duany (founder of the New Urbanism) and I co-authored a study titled, “Conservatives and the New Urbanism: Do We Have Some Things in Common?” Our answer was yes. I have been involved with New Urbanism from CNU III, because its essence is conservative: bringing back old ways. New Urbanism, in turn, is central to smart growth, which without New Urbanist influence can produce some ugly stuff. We don’t want any “Khrushchyovkys” [Soviet-style, five-story apartment blocks], thank you.
Our study was published by Free Congress Foundation which may still have copies available, as may CNU. Meanwhile, here at The American Conservative Center for Public Transportation, we will return to the theme of conservative smart growth from time to time. The physical setting in which we live is a factor in influencing our culture, values and morals. We wish our friends at Smart Growth for Conservatives
(http://www.smartgrowthforconservatives.com) well as they make their mark in this fertile area.
William S. Lind serves as Director of The American Conservative Center for Public Transportation
Photo via Wikimedia Commons.
What do you think? Leave a comment below.
Sign up for regular Resilience bulletins direct to your email.
Take action!
Make connections via our GROUPS page.
Start your own projects. See our RESOURCES page.
Help build resilience. DONATE NOW.
Tags:
urban planning

Smart growth for conservatives
.
.
.
Posted by Jeremy Woodward at 14:24