Level of carbon dioxide in the atmosphere surges

By Pilita Clark in London

©Dreamstime
The level of carbon dioxide in the atmosphere surged at its fastest rate in 30 years last year amid signs the world’s oceans and forests might not be storing the planet-warming gas as readily as they have in the past.
The rise in emissions of carbon dioxide, the main greenhouse gas produced by burning fossil fuels such as coal and oil, is the biggest driver of global warming, scientists say.

CO2 lingers in the atmosphere for hundreds of years, and according to a new analysis by the UN’s World Meteorological Organization, CO2 concentrations rose 2.9 parts per million (ppm) between 2012 and 2013, the biggest annual increase since 1984.
“Preliminary data indicated that this was possibly related to reduced CO2 uptake by the earth’s biosphere in addition to the steadily increasing CO2 emissions,” the organisation said in a statement.
The WMO’s findings come two weeks before a UN climate summit in New York aimed at bolstering efforts to seal a global climate change deal requiring countries to cut their carbon emissions and wean themselves off fossil fuels. World leaders have agreed to sign such a pact in Paris in 15 months and although the New York event is not part of the formal negotiations, the UN wants it to galvanise the Paris talks.
US President Barack Obama is due to attend the summit, which will be preceded by a large rally in New York and other global capitals that organisers predict will be the biggest people’s climate march ever.

Pilita Clark, FT Environment Correspondent, spoke to Fiona Symon about the ievel of carbon dioxide surging at its fastest rate in 30 years
The last time world leaders gathered for a climate summit was in Copenhagen in 2009, a meeting which failed to produce a meaningful global treaty stemming emissions. Many people close to the Paris negotiations are optimistic there will be a deal but it remains to be seen how effective it will be at lowering emissions.
The jump in CO2 concentrations revealed by the WMO is worrying news because it underlines the inadequacy of efforts to date, said Professor Dave Reay, chair in carbon management at Edinburgh university.
“Of particular concern is the indication that carbon storage in the world’s forests and oceans may be faltering,” he said.
“So far these ‘carbon sinks’ have been locking away almost half of all the carbon dioxide we emit. If they begin to fail in the face of further warming, then our chances of avoiding dangerous climate change become very slim indeed.”

Some scientists have been warning for years that the safe upper limit for atmospheric concentrations of carbon dioxide is no more than 350 ppm.
Average daily levels of carbon dioxide in the atmosphere reached 400 ppm for the first time in recorded history in May last year, according to data from the Mauna Loa Observatory in Hawaii, which has been measuring CO2 levels since 1958.
The WMO’s latest Greenhouse Gas Bulletin said the annual average concentration in 2013 was 396 ppm and would probably reach 400 ppm in 2015 or 2016.
The oceans’ ability to absorb carbon dioxide acts as a cushion for the impact of rising emissions, but it comes at the cost of increased acidification.
Present rates of ocean acidification seem to be unprecedented for at least the past 300m years, according to the WMO.
“We know without any doubt that our climate is changing and our weather is becoming more extreme due to human activities such as the burning of fossil fuels,” said WMO secretary-general, Michel Jarraud.
More video


Level of carbon dioxide in the atmosphere surges - FT.com

And from the science journal Nature: 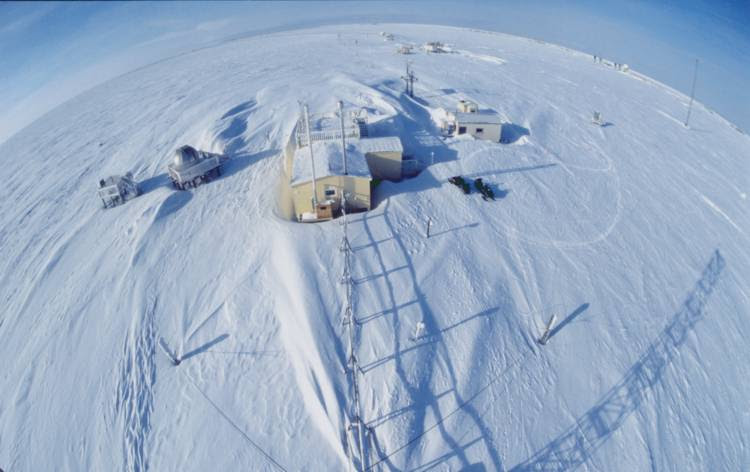 A US atmospheric observatory in Barrow, Alaska, is part of a global network that monitors carbon-dioxide concentrations.
Credit: NOAA

The carbon dioxide concentration in the atmosphere increased in 2013 at the fastest rate in almost 30 years, spurring concerns about global warming ahead of a United Nations climate summit later this month.
According to the annual Greenhouse Gas Bulletin of the World Meteorological Organization (WMO), released on 9 September, the average amount of CO2 in the atmosphere reached 396.0 parts per million in 2013 — 2.9 parts per million above the 2012 level. This is the largest annual increase since 1984. Averaged over an entire year, the global annual CO2 concentration is now expected to pass the symbolic threshold of 400 parts per million in 2015 or 2016.
The report is based on observations from the WMO’s Global Atmosphere Watch network. Preliminary data suggest that reduced CO2 uptake by plants and soils might add to the worrying increase in atmospheric CO2concentrations resulting from fossil fuel burning.
Atmospheric methane, the second most important long-lived greenhouse gas, also reached a new high of about 1,824 parts per billion last year, mostly due to increased emissions from cattle breeding, rice farming, fossil fuel mining, landfills and biomass burning.
Between 1990 and 2013, radiative forcing by long-lived greenhouse gases — the main cause of global warming — has increased by 34%, according to the WMO report.
The question remains, however, of why the rise in global mean temperatures near the surface has apparently slowed, after a series of exceptionally warm years in the 1990s. Scientists have suggested a number of possible explanations for the global warming pause. According to the latest hypothesis, regularly occurring changes in circulation patterns in the Atlantic and Southern Ocean may have caused an increased volume of relatively warm water to sink to the depth of the ocean, thus reducing the amount of ocean heat escaping to the atmosphere.
The world’s oceans take up one-fourth or so of CO2 emitted into the atmosphere. As emissions have been steadily rising for decades, the corresponding changes in ocean chemistry are dramatic: the current rate of ocean acidification seems to have been unprecedented in at least over the last 300 million years, according to an analysis included in the WMO report.
World leaders are set to discuss steps to reduce greenhouse gas emission at the United Nations climate summit on 23 September in New York.
Rise in greenhouse-gas concentrations continues at alarming rate : Nature News Blog