A heading in the Times last week looked rather disconcerting:

Prince Charles decries deforestation, but his green adviser says it is vital NGN

Millions of acres of tropical forest should be cut down to allow poor countries to expand their economies, according to a leading environmentalist and adviser to the Prince of Wales.

Sir Jonathon Porritt, who advises the Prince on green issues and is a former chairman of the Green party, said that conservationists from rich countries who demanded the preservation of all forests were guilty of “eco-imperialism”.

Interestingly, the campaigning group Avaaz has pointed out how 'eco-imperialism' has been behind the creation of many of Africa's 'national parks': 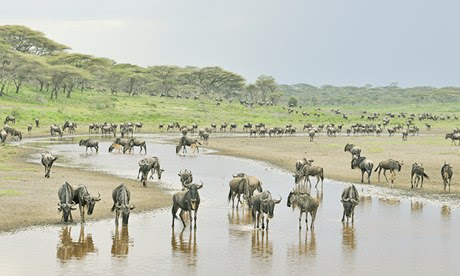 Migrating wildebeest in Serengeti, Tanzania. The plan would have evicted 40,000 Masai pastoralists to make way for a hunting reserve for Dubai's royal family. Photograph: Getty

Activists have claimed victory in a campaign to stop Tanzania evicting 40,000 Masai pastoralists from their ancestral land to make way for a big game hunting reserve for Dubai's royal family. Government officials had planned to annex 1,500 sq km bordering the Serengeti national park for a "wildlife corridor" that would benefit a luxury hunting and safari company based in the United Arab Emirates.

But campaigners said ministers dropped the scheme after visiting the Masai, who complained that their livestock would be cut off from vital grazing pasture, as well as 18 months of co-ordinated protests that included a global petition signed by more than 1.7 million people.

Samwel Nangiria, co-ordinator of the local Ngonett civil society group, said Tanzanian prime minister Mizengo Pinda spent two and a half days with the Masai in Loliondo district late last month. "The Masai said we cannot lose this land at any cost – this land has been ours for centuries. The conclusion was that government has turned down the plan to evict tens of thousands of Masai. It's a big success story, not only for the Masai in Loliondo but also in Tanzania and east Africa."

The international effort was led by the online activism site Avaaz.org, whose Stop the Serengeti Sell-off petition attracted 1,775,320 signatures and led to targeted email and Twitter protests. It argued that the Masai would be robbed of their livelihoods if their land was used for the commercial hunting of prize game such as leopards and lions by UAE royals.

Sam Barratt, a spokesman for Avaaz, said: "It's been amazing. The government did all it could to stop this becoming a national story but I think the confidence of the Masai has grown and grown. We helped get it out internationally and it was tremendously successful." He added: "This is a nomadic tribe thousands of years old that lives by ancient traditions, but modern technology unlocked their cause to the world."

Back to Jonathon Porritt and cutting down trees or not:

What does ‘Zero Deforestation’ mean to you?