Lives in a landscape: Branscombe chalet owners on Radio 4 ... and the "Shoreline Management Plan"

Earlier today on BBC Radio 4, we heard about the trials of owning a chalet in Branscombe - and the hassles of dealing with 'the authorities' when it comes to 'managing the coastline'...


BBC Radio 4
Lives in a Landscape 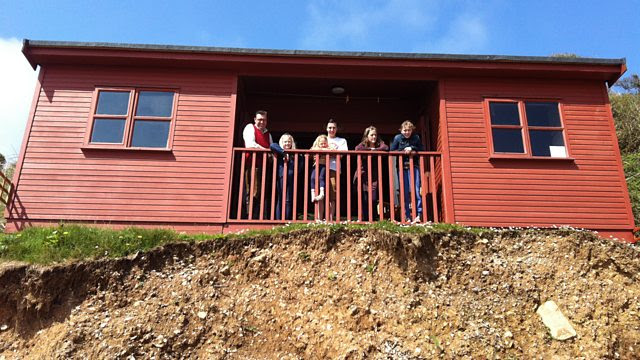 In February 2014, the worst storms in a generation hit the south Devon coast. Among those affected were the owners of five beach chalets at Branscombe. The sea took away much of the beach beach and eroded the earth banks on which the chalets stood, exposing the foundations and making some of them uninhabitable.
Before the storm, the chalets were worth up to £250,000 each but now they are virtually unsaleable. The owners would like to rebuild them, and move shingle back up the beach to protect them from future storms. But there's a problem: Branscombe beach is part of a Site of Special Scientific Interest, and falls under the control of Natural England. Natural England won't let the owners move shingle, partly because the upper shoreline is home to the very rare scaly cricket. They also adhere to a "Shoreline Management Plan", which says that there should be "no active intervention" to protect the beach from erosion.
There is a stand-off between the owners and Natural England, but the clock's ticking: without urgent action, the chalets could fall into the sea in the next big storm. Some of the chalet owners are not wealthy - they have mortgages on their chalets and depend on the income from letting them out in the summer. Now, with an entire season's income gone, some of them are staring at financial ruin. One man in particular, Philip Trenchard, was brought to the chalets by his father when he was a child, and now brings his own family every year. This continuity is a key part of his identity, and he'd expected to be able to continue using the chalets for many more years. But the coastal erosion, which is more severe than anyone predicted, has thrown all his assumptions about time scales into doubt.
Presenter: Alan Dein
Producer: Jolyon Jenkins