We've got a problem with food waste:
Futures Forum: Food: don't waste it
Futures Forum: Food waste and food banks: new initiatives >>> "This crisis has forced us to end the 'each man for himself' mentality, to look at what we can do together to get ourselves out of this mess."

The County Council is doing something about it:
Futures Forum: "Getting the most from waste in Devon"

The Transition Town Frome is doing something about it:

With households throwing away about a third of the food they buy, more than seven million tons of usable food is disposed of each year.

Anna Francis, the town council's resilience officer, said: "Reducing the amount of good food that is thrown away isn't only better for the environment – saving carbon and landfill space, but can also save the average household £470 a year, rising to £700 for a family with children." The application ties in with Edventure's new community enterprise programme which is also tackling food waste.

Coordinator Biz Bliss said: "We have a brilliant team of nine young people who are setting up an initiative called Feast On This. This includes setting up a community fridge where residents and businesses can put leftover food to share with others and a catering company turning wasted food into feasts and bringing the community together."

The first pop-up feast takes place at the Frome Christmas Extravaganza on November 27, where they will be sharing recipes and ideas as part of the Sharing Festival hosted by Share on the Bridge.

For more information call Ms Francis on 01373 475574 or send an email to francisa@ frometowncouncil.gov.uk

Over two years ago, one supermarket giant stated its aims very clearly when it came to food waste:
Philip Clarke: Tesco is waging war on food waste, even if it means we sell less - Telegraph

However, things have not moved that quickly across the sector:
Why supermarkets’ love of use-by dates leads to food waste | Joanna Blythman | Comment is free | The Guardian

Hugh Fearnley-Whittingstall will be looking at this next Monday:

At the Unity Youth Centre in Toxteth, Liverpool, chef Craig McKenzie rustles up free hot meals for a hall full of hungry children who've just put in a hard day at school. Supermarkets are discarding hundreds of tons of food every year. What can be done to stop it, asks Hugh Fearnley-Whittingstall.
What makes his job particularly satisfying is that he's cooking with ingredients that would otherwise have gone to waste. There is nothing wrong with the food he's using - it's all good, fresh stuff - but it has been rejected by supermarkets.
These ingredients - including quality fruit, veg and meat - haven't even made it to the shelves. They've been turned away before they get to the stores because there simply isn't space for them. Overproduction, it turns out, is the very cornerstone of our whole food retail system. And it comes with a massive side-order of waste.
It was great to watch those kids tuck into their dinner. But the sorry truth is that the food being put to good use in this way represents only a tiny fraction of the surplus generated by British supermarkets every day.
FareShare is the charity that redistributes this food to the Unity Centre, and many other groups serving community projects around the country. But chief executive Lindsay Boswell says the charity receives only 2% of the unsold, fit-to-eat food cast off by the food industry. The charity's aim is to secure 25% of it, enough to provide more than 1.5 million free meals a week to people who are in need.
Even if they achieve that goal, that still leaves an awful lot of perfectly good food unaccounted for. And that's all because the idea of running out of a product, or having shelves less than jam-packed, is absolute anathema to our supermarkets.
What's more, these big retailers are so big they can afford to sell only a proportion of "units" and discard the rest. Waste - hundreds of thousands of tonnes of it - is built into the system.
Yet if you look at many supermarket websites, you could be forgiven for thinking they don't have a waste problem at all. Many proudly announce that they send no food to landfill, for example.
But even if that's true, isn't it a bare minimum requirement? Hey, they're not dumping good food into a hole in the ground! Do they want a round of applause?

Donating food to charity is the "solution" that supermarkets want you to see, of course. But they can be a bit sketchy on the stats. Many don't give any detail at all about just how much of their unsold food is redistributed. The slippery phrase "where possible" comes up a lot. But as Lindsay Boswell at FareShare says, only a tiny portion of edible surplus food is being sensibly used.
If you try to find out what supermarkets do with the rest of their spare stock, you will come across much talk of "anaerobic digestion". This is an industrial process that uses micro-organisms to break down organic matter, producing a methane-rich gas which can be burnt to produce electricity. Sounds very neat and eco-friendly, doesn't it?
But anaerobic digestion (AD) is a red herring. Proponents say it's better than dumping waste in landfill. That may be so, but if that "waste" is edible food, it ain't saying much.
AD is a reasonable option for food that really is beyond being eaten - plate waste from the catering industry, for example. But making gas from good food is a very poor alternative to giving it to hungry people.
To most of us, that's obvious. Even if you look at it from a cold, hard economical viewpoint, it makes zero sense - AD recovers only a fraction of the energy available from food. If you or I eat it, we get all of it.
I've visited an AD plant and watched supermarket food "waste" being fed into the digesters. As a condition of filming, we agreed not to reveal the brands or supermarkets that were sending food here, or whether it was still edible. But let me say this, as a generality that's beyond dispute - much of the food going into these facilities is still fit for human consumption. It just shouldn't be there.
Supermarkets are using AD as an easy get-out clause, dodging responsibility for their huge waste footprint.
If you can chuck it all in a giant bacterial disappearing machine at the end of the day, the problem's solved, right? But it's not a truly sustainable solution - and certainly not a moral one. Retailers should be creating far less waste in the first place, and any food they produce that can be eaten by people should be eaten by people.
Why isn't it happening? Why aren't supermarkets sending more food to charities? Could it be because it involves a little effort and co-ordination? A few more man-hours, that aren't going to be reflected in the supermarkets' bottom line?
As the Morrison's website admits: "The redistribution of surplus food from stores presents a number of operational and food safety challenges."
But if the shocking scandal of supermarket food waste is to be dealt with, these are challenges that absolutely must be met. And they can be - it's Morrison's, in fact, that have now made the boldest move towards that goal, recently committing to sending all their unsold food to charities.
I applaud this step - even if it did come just 48 hours before my BBC programme, Hugh's War on Waste, questioned Morrison's commitment to dealing with waste. But "all" is a big word. Does it include all the surplus food in their distribution centres? All the fresh produce piled up on farms - the perfectly edible but slightly imperfect fruit and veg that doesn't match the supermarket's "cosmetic standards" that I wrote about last week?
How do we hold our major supermarkets to account? What's going to make them really step up and address this crazy waste once and for all? Well, one thing I've learned from making my series is that our big food corporations are not afraid of me (though I don't think I'm their favourite person right now).
But they are afraid of you - their customer. And if you insist that they deal with waste - because if they don't, you'll shop at another supermarket - then they will.
We've created a website that makes it a cinch to get your message across. There's a letter I've composed to supermarkets, asking them to stop wasting food, right now. It heads off all the excuses and weasel words that have allowed our retailers to bluff you into thinking they have this problem covered - because believe me, they haven't. All you need to do is fill in your details, tell us which particular supermarkets you shop at, and we'll make sure they get the message.
Every voice raised takes us a step closer to winning the war on waste.

More from the Magazine

Tonnes of perfectly good food is thrown away in the UK every year. Why, asks Hugh Fearnley-Whittingstall.
The rejected vegetables that aren’t even wonky
You can watch Hugh's War on Waste on BBC One, on Monday 9 November at 21:00 GMT, or catch up afterwards on iPlayer. 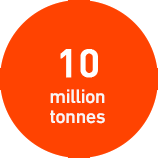 A parallel campaign has just been launched:

It’s absurd. Farmers are throwing away tonnes of fresh food because supermarkets only accept “perfect” fruit and vegetables of an exact shape and size. [1] So 38 Degrees member Kitty has started a campaign for supermarkets to relax their wasteful rules.

The supermarkets are worried misshapen potatoes put customers off. But we are their customers - so let’s tell them we’ll buy fruit and veg that looks the way mother nature intended it. A huge petition, powered by shoppers, could convince supermarket bosses to stop rejecting perfectly good food.

If you agree that good food going to waste is a disgrace, then please sign the petition now. It only takes a few seconds:

Some farmers are being forced to throw up to 40% of their veg away every week because they’re millimetres off meeting supermarkets’ strict standards. [2] Piles of parsnips going to waste is obscene. As their customers, we need to tell them.

If you don’t care whether your carrots are the perfect size and shape, then sign the petition now:
Reduce supermarket waste of fruit and vegetables | Campaigns by You

Reduce supermarket waste of fruit and vegetables | Campaigns by You