These concerns appeared on the front page of this week's View from Sidmouth: 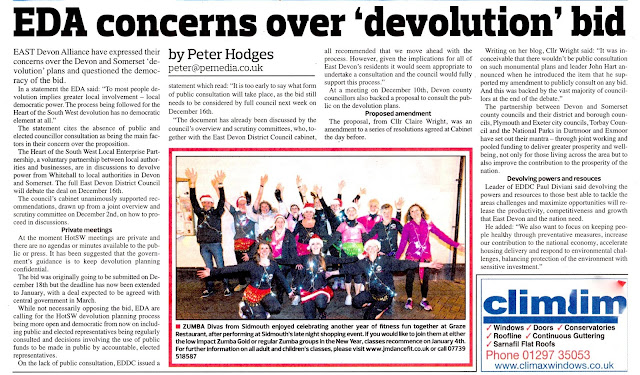 East Devon Alliance have expressed their concerns over the Devon and Somerset ‘devolution’ plans and questioned the democracy of the bid.
In a statement the EDA said: “To most people devolution implies greater local involvement – local democratic power. The process being followed for the Heart of the South West devolution has no democratic element at all.”
The statement cites the absence of public and elected councillor consultation as being the main factors in their concern over the proposition.
The Heart of the South West Local Enterprise Partnership, a voluntary partnership between local authorities and businesses, are in discussions to devolve power from Whitehall to local authorities in Devon and Somerset. The full East Devon District Council will debate the deal on December 16th.
The council’s cabinet unanimously supported recommendations, drawn up from a joint overview and scrutiny committee on December 2nd, on how to proceed in discussions.
Private meetings
At the moment HotSW meetings are private and there are no agendas or minutes available to the public or press. It has been suggested that the government’s guidance is to keep devolution planning confidential.
The bid was originally going to be submitted on December 18th but the deadline has now been extended to January, with a deal expected to be agreed with central government in March.
While not necessarily opposing the bid, EDA are calling for the HotSW devolution planning process being more open and democratic from now on including public and elected representatives being regularly consulted and decisions involving the use of public funds to be made in public by accountable, elected representatives.
On the lack of public consultation, EDDC issued a statement which read: “It is too early to say what form of public consultation will take place, as the bid still needs to be considered by full council next week on December 16th.
“The document has already been discussed by the council’s overview and scrutiny committees, who, together with the East Devon District Council cabinet, all recommended that we move ahead with the process. However, given the implications for all of East Devon’s residents it would seem appropriate to undertake a consultation and the council would fully support this process.”
At a meeting on December 10th, Devon county councillors also backed a proposal to consult the public on the devolution plans.
Proposed amendment
The proposal, from Cllr Claire Wright, was an amendment to a series of resolutions agreed at Cabinet the day before.
Writing on her blog, Cllr Wright said: “It was inconceivable that there wouldn’t be public consultation on such monumental plans and leader John Hart announced when he introduced the item that he supported my amendment to publicly consult on any bid. And this was backed by the vast majority of councillors at the end of the debate.”
The partnership between Devon and Somerset county councils and their district and borough councils, Plymouth and Exeter city councils, Torbay Council and the National Parks in Dartmoor and Exmoor have set out their mantra – through joint working and pooled funding to deliver greater prosperity and wellbeing, not only for those living across the area but to also improve the contribution to the prosperity of the nation.
Devolving powers and resouces
Leader of EDDC Paul Diviani said devolving the powers and resources to those best able to tackle the areas challenges and maximize opportunities will release the productivity, competitiveness and growth that East Devon and the nation need.
He added: “We also want to focus on keeping people healthy through preventative measures, increase our contribution to the national economy, accelerate housing delivery and respond to environmental challenges, balancing protection of the environment with sensitive investment.”

And the Herald has covered the same story in this weekend's paper: 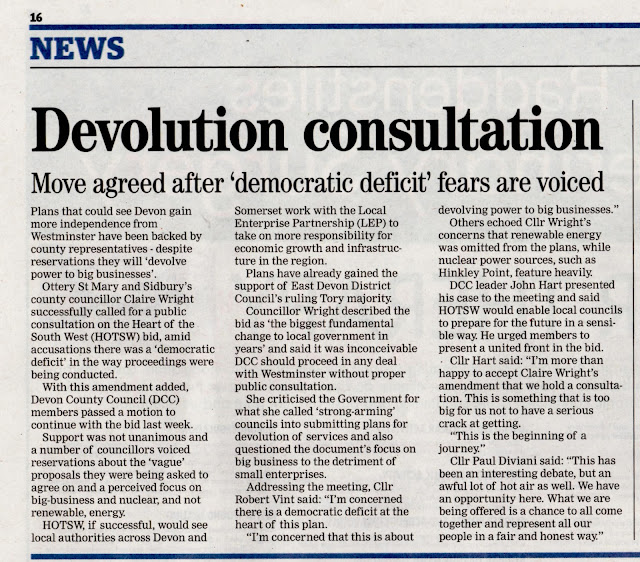