Something Wonderful in My Back Yard: the musical >>> coming to a place near you very soon >>>

He introduced audiences to his latest scheme:
Futures Forum: Something Wonderful in My Back Yard: the musical >>> launch party 18th March

... which was in turn based on an idea from Transition Town founder Rob Hopkins:
Futures Forum: Are you a SWIMBY? >>> Something Wonderful In My Back Yard >>>>>>>

Something Wonderful in My Back Yard - SWIMBY The Musical - YouTube

And a song to sample:
BECAUSE THE SUN CANNOT UNSHINE - from SWIMBY musical - by Matt Harvey and Thomas Hewitt Jones by SWIMBYmusical

Here's an overview of things:

Making a song and dance about community energy – SWIMBY on Kickstarter

‘Something Wonderful in My Back Yard – The musical’ started it’s life with the working title: Transition Town – The Musical and was originally conceived by producer Chloe Uden. 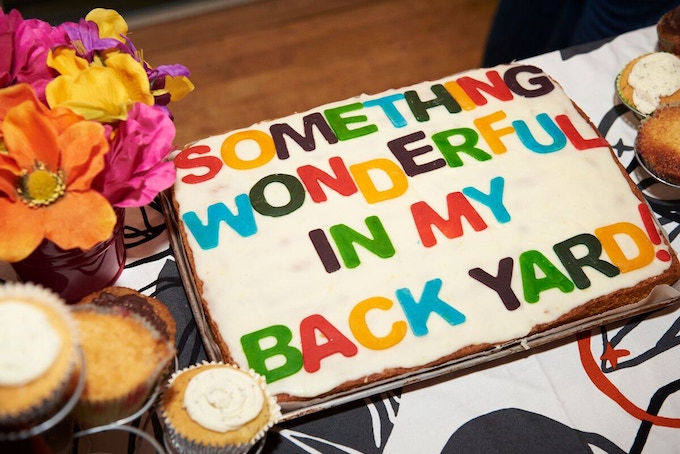 Think of a musical and you might imagine the romance of West Side Story or the glamour of Chicago. But this new musical [currently being written] has a different setting and tackles a very different subject: how do a motley group of ordinary, argumentative people persuade their make-do-and-mend, muddle-through market town to embrace community food and energy schemes and become more resilient?
The SWIMBY team are currently looking for support on Kickstarter
Writer Matt Harvey and composer Thomas Hewitt Jones are well known in their fields – and their allotments – and have previously collaborated on The Same Flame (published by Boosey & Hawkes) and the musical Rumpelstiltskin, produced at The Egg, Theatre Royal Bath, last Christmas and set to be revived this Christmas at the MAC Belfast. (You can get tickets here)
Matt and Thomas have been talking to people involved in community energy groups and theTransition network about to develop this heartening new story for our times.
This project is currently being supported by Rob Hopkins from The Transition:
“When Matt first mentioned the idea of “Transition Town: The Musical”, I couldn’t help laughing. There was something silly about it, but at the same time something rather wonderful. Doing Transition has many of the elements of great musicals: drama, moments of high tension, highs of great choral unity, moments when it all locks in beautifully and it feels more exhilating than anything else, and the fact that it needs a whole cast, not just one or two heroes. This is something designed to be performed by communities, and I really hope it becomes the ‘Billy Elliot’ for community activists, the ‘We Will Rock You’ for community energy, and the ‘West Side Story’ of rooftop gardeners. The world needs this musical. Please support it!“. Rob Hopkins
The musical will be  written for use by communities all across the UK and perhaps even further afield, but the team have decided to develop the first show in Totnes; This is partly out of convenience as it’s where Matt lives, but it’s also because Totnes was the birthplace of the Transition Movement. Whilst the musical is not about Totnes, it is an inspiring place full of talented and generous people who are helping us to develop this piece that we hope will be far reaching and relevant.

What has SWIMBY Musical achieved so far?

The organisers are now deep into developing the SWIMBY musical ready for a premiere in June 2016 where we will invite our audience and participants to consider how we are all working towards a low carbon future, and how we can come together as a community to be more successful in this transition.
They are just about to publish the SWIMBY musical songbook which contains the first 11 songs from the show which will be launched at anearly materials show on November 11th hosted by Rob Hopkins
They’ve been working with King Edward VI Community College (KEVICC) performing arts club and orchestra, The Grove Primary School Years 5 & 6, Global Harmony Choir, Billy Bottle and Martine (from The Voice) and Kate Van Dike to develop the music.
These 255 performers have already performed songs for 1753 people at 23 events includingTEDxTotnes, The Devon County Show, Resurgence Summer Camp on BBC Radio Devon and BBC Spotlight TV over the past 4 months.
They’ve also worked with 36 artists to produce artwork and props for the musical. And we’ve not even finished writing the show yet! Furthermore, according to Thomas “the songs contain a total of 1125 bars of music, 28 plagal cadences, 6 augmented sixth chords and a tierce de picardie”.

website www.SWIMBYmusical has a lot of the resources we’re producing available for free.
Over the coming months, SWIMBY musical will be inviting many different choirs to work with the material and perform the music in at whole host of events including Glastonbury Festival We will be fundraising for the further development of the show over the coming weeks and would be grateful for all the support or pointers you can give!

Over the next 12 months, SWIMBY musical will produce:

Something Wonderful in My Back Yard : SWIMBY Musical a sparkling new musical for amateur groups telling the story of a community encountering some of the questions and issues around peak oil and climate change through catchy songs and exuberant dance numbers – we hope this touring show will be available after the June 2016 premiere
A show for Glastonbury Festival – on whose website this kickstarter is featured
A songbook and backing recordings for the show that will be available for community groups and choirs
Merchandise – Postcards, badges, tee-shirts will also be produced during the project.
Workshops / engagement tools – to support people in using the musical

In exchange for your support They’re offering a number of rewards!

Examples of some of the rewards:....

Making a song and dance about community energy – SWIMBY on Kickstarter | power culture.
.
.
Posted by Jeremy Woodward at 15:09