Dave Fishwick was recently in Scunthorpe where he declared his support for small businesses:

We'll bank on Dave to give our businesses a kickstart

in Scunthorpe.
David Fishwick, who starred in documentary series Bank of Dave, spoke at the Banking on Success event at The Baths Hall in Scunthorpe.

Mr Fishwick, the largest supplier of minibuses in the UK, launched Burnley Savings and Loans Ltd in 2011 under the slogan "Bank on Dave!".
He started the company to help provide better access to loans and help to give small businesses

a kickstart.
He spoke at the event about his own journey, in an attempt to inspire confidence in small businesses and entrepreneurs

from North Lincolnshire.
Mr Fishwick said: "If a lad from Burnley who sells buses can do it, then anyone can.
"The ultimate goal for me is to have a Bank of Dave, Sarah or Pete in every major town and city.
"I would like to see this kind of event rolled out elsewhere, because you don't see enough of it."
And the event was highly praised by entrepreneurs and small business

representatives who attended.
Joanne Lomax, 45, is looking to start her own social enterprise combining sales consultancy and psychological therapy.
She said: "Getting started is a daunting prospect, even though I feel there is a need for the services I would offer.
"I was very inspired by Dave and would love to see a Bank of Dave in our region."
Bethan Clayton, 33, is interested in starting her own small business

.
She said: "I've had a few ideas, some of which are food-based and some to do with landscaping and low carbon projects.
"I was drawn to the event because of the speaker line-up, which was fantastic.
"I took inspiration from the dedication of Claire from Scrubby's.
"The event has given me confidence and definitely sent a positive message.
"It is very encouraging to see examples of businesses that have grown during tough times."
Read more: http://www.thisisscunthorpe.co.uk/ll-bank-Dave-businesses-kickstart/story-19270191-detail/story.html#ixzz2WOD2GL9C

But, according to a report last month, you don't have to live in Lancashire: even Devonians could benefit from this new type of banking:


'You don’t have to live in Burnley to bank like Dave': Lend-to-save invites borrowers and savers to go online


A new updated series on the ‘Bank of Dave’ revealed last week how people in Burnley, Lancashire, queued around the block to be a customer of the ‘bank’ – either to put their money away and garner a five per cent rate, or borrow money.
The Channel Four programme, following businessman Dave Fishwick and his brave banking plans, shines the spotlight on problems customers and small businesses face when it comes to dealing with banks.
High street banks have had their reputations tarnished in recent years, with the reluctance to lend, tales of poor customers service and scandals, such as mis-sold Payment Protection Insurance (PPI) and rigging LIBOR rates, all denting confidence. 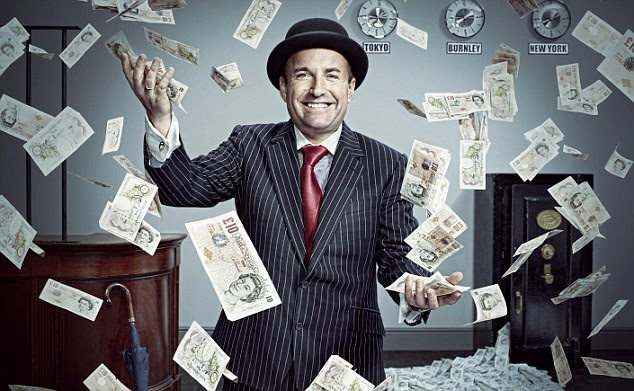 Bank of Dave: Dave Fishwick has captured the imagination of the country with his Channel Four programme

Dave has successfully captured the imagination of the country with a return to consumer orientated local banking – ‘by the community, for the community’ – with profits going to charity.
His simple plan is to pay a savings rate of 5 per cent, and lend money to businesses and people who need it and who he has assessed will pay him back.
That proved to be a raging success, yet the Financial Services Authority at first refused to meet him and then tried to shut him down.
Dave has been inundated with requests from people asking him to open up a branch of his ‘bank’ in other parts of the country, only to be left disappointed. He is just one man after all.

But there is an alternative – lend-to-save, otherwise known as peer-to-peer (P2P) lending. It has become a popular concept in the last couple of years.
It works by matching investors, who are looking for a more competitive rate of return on their money, with those lending to those who want to borrow, usually at far lower APR rates than high street providers – and this is exactly the model 'Bank of Dave' uses.
Those who do borrow money have to meet strict criteria. This means default rates tend to remain extremely low compared to other loan providers.
But the fact remains that in return for lend-to-save's higher rewards you are taking on a risk that is not involved in a savings account.
The three major players in the industry, FundingCircle, RateSetter and Zopa, have been attracting swathes of investors through decent rates offered online.
FundingCircle is advertising an 8.8 per cent rate and RateSetter 7.4 per cent, before defaults and fees, while Zopa is offering 5.5 per cent after fees.
Dave’s blueprint has already been a hit online in the form of these lend-to-save firms, according to the boss of RateSetter, who speaks exclusively to This is Money… 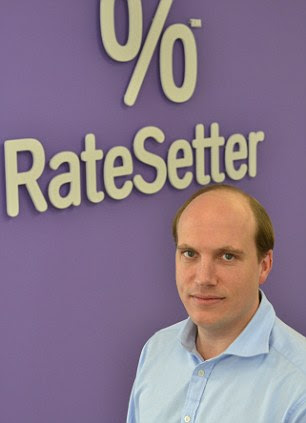 Rhydian Lewis: RateSetter boss says Bank of Dave concept is in action online
Comment by Rhydian Lewis, founder of RateSetter
Just before you up sticks and move to Lancashire, you might be surprised to know that Dave’s blueprint for a bank already exists elsewhere, and has done for some time: online and available to all, in the form of P2P platforms.
For, after all his struggles against Financial Services Authority red tape, that is exactly what Dave has created; a P2P company with a shop front, taking deposits from Burnley Savers and lending it directly to people or small businesses.
The same process applies online, with RateSetter matching smarter savers with credit-worthy individuals, ensuring everyone gets what has been agreed.
Ask any of the 250,000 who are currently using P2P lending in this country why they do so and the chances are you will get a response similar to those that Dave makes throughout the show.
They are the same reasons why we set RateSetter up in 2010. Historic low interest rates by the Bank of England, and banks reluctance to lend or offer fast and flexible low cost loans, mean borrowers and savers are looking elsewhere.
Savers in particular are crying out for fair rates and a return to banking in its purest form – without being penalised for the mistakes of other parts of the business or wider economy, and without subsidising the overheads that accompany running a branch in every town and city. And lending to save is an attractive proposition to achieve five per cent or better, with the risks carefully managed by the operator.
There are differences of course: the Bank of Dave is reliant on Dave’s largesse, as well as his personal approach to assessing creditworthiness.
RateSetter undertakes credit checks in the same way as a bank, using credit reference data, and only approves a relatively small percentage of applicants.
The local nature of the Bank of Dave is a great strength, and creates valuable local reinvestment and support; online peer-to-peer lending can match a borrower in Bournemouth with a lender in Leeds.
But the fundamentals remain the same: bringing people together to give them a better and fairer deal. Even Dave’s Guarantee – that he will personally cover any losses incurred by savers – is similar to RateSetter’s compensation fund that reimburses Lenders and has ensured that everyone has received every penny of capital and interest they have expected.
The Bank of You isn’t as far away as you might think.