The fourth talk at the Vision Group's AGM on Wednesday was given by Lynette Talbot, chair of Sidmouth in Bloom. Sidmouth In Bloom

SIB has worked very closely with Sidmouth Town Council - for example, with the provision of an annual grant towards the town planters, flowerbeds and floral displays (£13,400 for 2010/11: STC Annual Report 2009/10) and help with the entry fee for the Communities in Bloom International Challenge for 2013 (STC Minutes Feb 2013) Otherwise, everything is done on a voluntary basis.

This has been the case for some time now, as a report from the Telegraph in 2008 pointed out:
Once, neat lawns and pristine planting were enough to win Britain in Bloom. Now the judging criteria include sustainability, recycling and community involvement - and it is having a hugely positive effect.
Britain in Bloom: floral chance - Telegraph

As Lynette said, the practices of Sidmouth in Bloom are very much about sustainability:
> Cuttings are taken from perennials and tended by volunteers; much is grown directly from seed.
> Anyone can also join the SiB Sidcombers to clean-up the beach
Sidmouth In Bloom | SPONSORS & FRIENDS
> Material collected goes straight to composting, through a local company or the District Council.
> Traditional Victorian carpet bedding is locally-sourced - from Cornwall. 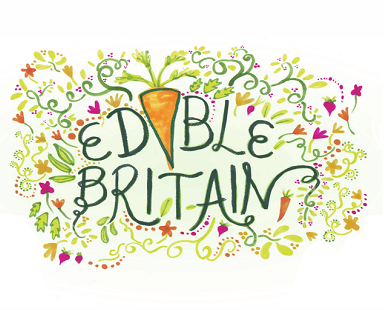 > This year's Britain in Bloom them of 'Edible Britain'  will not only help the birds and bees, but show passers-by where their fruit and veg come from.
Edible Britain campaign / RHS Gardening
> Sidmouth primary schools have been given seeds and compost - this will, after all be part of their curriculum as of next year.
> Plants and planting systems which need less water are made good use of.
> Planting in appropriate environments is known to have an effect on depression and vandalism - for example, the approach to the Health Centre.

It is about people and places:
These changes are truly transformational, from fostering strong communities and building civic pride, to making the local area a better place to live by reducing crime, helping local businesses, creating investment and employment, along with improvements to social needs such as training the long term unemployed. But it’s also about creating beautiful spaces and improving the wider environment through attracting more wildlife and, of course, having fun.
www.rhs.org.uk/Gardening/Community-gardening/pdf/Britain-in-Bloom-Impact-Report

With an extraordinary example in the States: Detroit gets growing | Environment | The Observer
See also: Futures Forum: Public Space

Meanwhile, back in Sidmouth:

> ‘Friends’ can help raise money by growing plants for sale at the Community Market each month or assist on the stall.
Sidmouth In Bloom | SPONSORS & FRIENDS

> And there is an interesting project on the beach:
Sidmouth in Bloom (SIB) are developing an area of beach where the storm tides rarely reach and beach plants have already started to colonise. They have taken over management of the site from East Devon DC and persuaded them not to kill off all the vegetation with weedkiller. Plants such as the sea beet, tree mallow, horned poppy and rock samphire are already colonising the site and the aim is to increase the biodiversity by introducing other native beach plants that have not yet reached the site. Devon Plant Heritage Group is backing the project by helping to grow beach plants from seed sourced from other parts of the county. Our aim is to encourage proper beach plant communities to develop on our beach.
https://www.visionforsidmouth.org/media/72684/sidmouth-beach-garden.pdf
Vision Group for Sidmouth - Biodiversity Group
Vision Group for Sidmouth - Beach Garden
Sidmouth In Bloom | NEWS

TELEVISION horticulturist Anne Swithinbank was among a hardy group who braved a wet and blustery beach to officially open a new seafront attraction.
Driving forces behind the Oceanscene project near the Millennium Walk are now looking forward to its floral features flourishing.

Anne Swithinbank toasted the event by pouring champagne onto the attraction. Photo by Eve Mathews
Anne planted sea kale, sea carrot and other shingle plants and was delighted that so many different groups had come together and are now involved with the eco-system. The garden is set as the scene of a derelict pier at one end and an old boat at the other.
A new information board has been installed - which will change as more varieties of plants grow.
“We are all looking forward to having a colourful feature on the shingles beside the Millenium Walk,” said Sidmouth in Bloom (SIB) chairman Lynette Talbot.
“Although plants are being introduced by human intervention, the intention is to grow shingle plants endemic to the Devon coast. We encourage everyone to look after this bed, wander around the plants to see what is coming up but take care not to damage the seedlings.”
Many of the scene’s features have been salvaged from previous coastal clean-ups.
TV star declares Sidmouth Oceanscene open! - News - Sidmouth Herald
.
.
.
Posted by Jeremy Woodward at 14:32