How I lived by spending nothing for two years

Mainstream media has been interested in this notion for some time now: 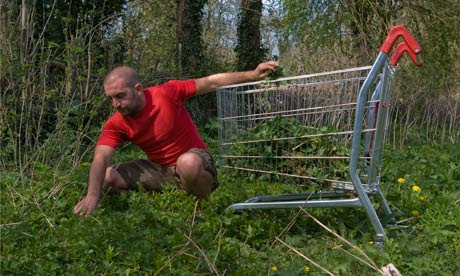 Last month's Telegraph revealed how to live without money:


How I lived by spending nothing for two years

In November 2008, Mark Boyle gave up money for more than two years while living in a caravan. He shares his top tips for living on less with Jessica Winch.

He volunteered at the farm, grew his own food, cooked on a wood-burning stove and generated electricity through a solar panel, bought for £360 before the experiment started.
“I got to the point when I was looking at all the big issues in the world, such as deforestation and sweatshops, and I realised they are all symptoms of a deeper cause; a separation from what we consume. The most potent tool we have in terms of separation and an illusion of independence is money,” he said. “I wanted to see if it was possible to live without money, and how it would affect me.”
He admitted that when he started he was seen as “a bit of a joke”. “I used to get a lot of criticism,” Donegal-born Mr Boyle said. “When you challenge money, you challenge a lot more than notes and coins. You challenge a whole perspective on the world.”
However, the 34-year-old said support had increased over the past few years. “I’m sure some people still think it’s a bit of a joke,” he said. “But when I started in 2008, just before the financial crisis hit the headlines, I was mostly taking criticism. But since then most people are incredibly positive about what I’ve done.
“It is just people who don’t have that much money, wondering how they are going to survive the next year. Money isn’t as secure as they thought it was when times were booming.”
He said few people will want to give up money completely, although there has been an increase of that in the past year.
The vast majority of people were simply interested in how they could spend less. “I think that’s a sensible approach,” he said.
He said the first few months of living without money were “definitely the hardest period”.
“I came from a very conventional background and everything was new to me,” he said. “How I eat, how I get from A to B, and how I brush my teeth. All these things were new, and I felt the lack of perceived security that money gives us.”
He cooked food – grown, donated or foraged – on a rocket stove outside the caravan. He bathed in a river with soap made from the plant soapwort, and made his toothpaste from washed-up cuttlefish bones and fennel seeds.
He travelled around on foot or by bicycle. Instead of a flush toilet, Mr Boyle had a compost lavatory – still one of his top tips for people wanting to emulate his moneyless lifestyle.
“After two or three months I just started to trust that everyday my needs would be met somehow,” he said.
For those who prefer to put Colgate on their toothbrush, Mr Boyle advocates websites such as Freecycle and Freegle, where goods and services are given away or exchanged.
There are also websites such as Liftshare, which matches journeys and cars to save on petrol. If you want to reduce your spending on the high street, Mr Boyle suggests organising a clothes swap with friends or neighbours.
He set up a “Freeconomy” community online in 2007, where skills and tools are shared. “It’s not about having to go off and live in the woods, you can do it from your house,” he said.
Mr Boyle wrote a book, The Moneyless Man, during his time living without money. His latest book, The Moneyless Manifesto, is available free online and contains practical advice for people who want to live on less money.
Mr Boyle, who returned to the monetary world in 2011, is currently housesitting at Emerson College, an adult education centre that runs courses in a range of areas from biodynamic agriculture to storytelling .
He has just won planning permission for a straw bale, timber frame, passive-solar house in Devon, which he hopes to start building in June using the proceeds from his book sales.
Although it may seem ironic that Mr Boyle has made money from living a moneyless lifestyle, he said he was always clear that the profits made would go towards this new project. “We are working towards living in a localised gift economy, meeting all of our needs through gifting and growing our own food,” he said.
There is also a moneyless wedding to plan with his fiancée, Jess. “I’m not sure how it will work,” he said. “It’s a big conversation to have, how you put on a wedding for free.
“We want to show that people don’t have to get into masses of debt to have a really fun wedding.”
Luckily, his fiancée shares his views about living on less. “The time I lived without money, I've never been happier or healthier,” Mr Boyle said. “It had its ups and downs but it was a whole new way of being in the world. I want to get back there as quickly as possible.”

Mark Boyle's tips for cheaper living
1. If you are looking to buy something, from a wardrobe to a bicycle, there is no need to buy it. Go to websites such as Freecycle, or Freegle.
2. If you are looking for clothes and don’t want to spend money on the high street, organise a switching evening with friends.
3. If you are travelling for leisure or for work, go to websites such as Liftshare, which matches cars with journeys.
4. If you are travelling and need a place to stay, forget B&Bs and hotels, go to websites such as Couchsurfing or The Hospitality Club.
5. Websites such as Freeconomy are perfect if you are looking to share skills or tools without money changing hands.
6. You can use forest gardening techniques (mixing trees, shrubs and plants to mimic the structure of a natural forest) to grow as much food as possible in your garden.
7. You can re-home battery chickens to give them a new life and provide you with fresh eggs. Visit the British Hen Welfare Trust for more information.
8. You can easily make your own cider by scrumping apples from your neighbour’s garden. Obviously ask them for permission, and drop round a bottle to say thank you.
9. You can grow your own soap and shampoo by planting soapwort in your garden.
10. For the really brave, I recommend installing a compost toilet in your house or garden. It saves money, water and the environment.
Mark Boyle will be taking part in On Money at the London Literature Festival at the Southbank Centre on Saturday May 25. See londonlitfest.com for information
.
.
.
Posted by Jeremy Woodward at 16:26