A couple of months ago, Kevin McCloud's 'favourite' house designer brought out a new book:

Ben is a prolific author, having written The Woodland Way, a permaculture approach to sustainable woodland management and The Woodland House, which charts the building of his unique cruck framed home in the woods. The building of his house was filmed for Channel 4's Grand Designs program and was voted the most popular Grand Design ever by viewers. He has also written The Woodland Year, a month by month journey through the woodland, a celebration of every aspect of sustainable woodland management, including crafts, seasonal recipes and the rhythm of work throroughout the year. He is also the author of Roundwood Timber Framing, a full colour guide to his building techniques which he has also described in a comprehensive training DVD by the same name. While his latest book Woodsman, living in a wood in the 21st century is a journey into Ben's life as a woodsman and the knowledge he has acquired and applied to his home and businesses.
Ben Law Woodsman


A house in the woods might sound like a fairy tale, but it doesn't have to be made of gingerbread.
If you venture into Prickly Nut Wood, near Midhurst in West Sussex, you will find an intriguing home built out of sweet chestnut coppiced from the surrounding woodland.
The three-bedroom house was built by woodsman Ben Law six years ago.
'If you are going to live in woodland, then you have got to engage with it at a fairly major level,' says Ben.
He grew up in the countryside in the South-East of England, spending a lot of time in the woods as a child, and always wanted to work on the land. 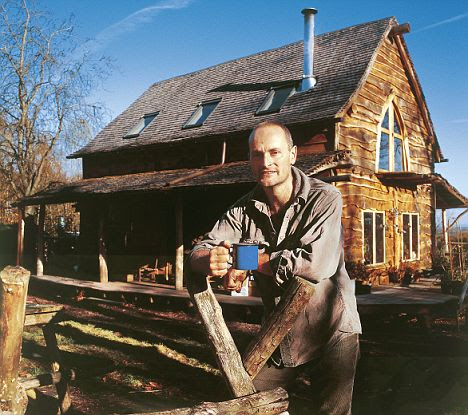 Putting down roots: Ben Law and his self-built house
If you go down to the woods today: Build your own house in the sticks | Mail Online

His personal favourite Grand Design cost just £28,000. It was built by Sussex woodsman Ben Law from the trees in the woods in which it stands. Recycled newspaper insulates the floor and thick straw bales line the walls, covered in lime plaster. All the electricity comes from solar panels and wind turbines, while water is taken from a nearby spring. "He built the most delightful home and he built it all on budget. It's the extraordinary personal values of people like Ben Law that matter. It's not about half a million or three-quarters of a million pounds. It's the brutality of those sorts of figures that stops people in their projects."
Grand Designs: The home truths of Kevin McCloud | Money | The Guardian

For 10 years, Ben Law lived in tents and caravans in a wood in West Sussex. As a woodsman, he needed and wanted to live among the trees, but now he wants a house for some creature comforts. Ben has invited volunteers to help him build a sustainable house by hand, from the materials growing around him.
Grand Designs - Sussex - The Woodsmans Cottage - YouTube
I felt the need to put this video from Grand Designs, this is without any doubt the best design on the program and aparantly the favorite also to Kevin McCloud. For more information about this house project and the man behind it visit Ben Law Woodsman
The Woodman's Cottage - YouTube

Master of the house: Kevin McCloud

> Demand that your house consumes the minimum of energy yet keeps you warm and comfortable.
> Organise your home life around who you are and what you do. If you have a family, enshrine what is good about that family in the layout of your building. If you're single, enjoy it while you can.
> Avoid being seduced by the trinkets and gadgets of domestic life.
> Our experience of architecture should improve the closer we get to it and, for that matter, the longer we use it.
> Make everything you touch of the highest quality. Door handles, locks, switches, chairs and controls should be an ergonomic pleasure to use and robust enough for that pleasure to continue.
> Buy some tools and learn how to mend your things.
> The most interesting homes are those that are full of autobiography; those that are maybe a bit cluttered, feel lived in and are delightful for it; those that have a mixture of new and old, borrowed and bought — and not those that resemble furniture showrooms.