Can anyone save the High Street?

On BBC2 we've just had the first of three in the series"Robert Preston Goes Shopping":

Plenty of people loathe them, but millions rely on them. Out-of-town superstores - bigger, uglier brothers of standard-sized supermarkets - are an inescapable part of the modern British landscape.

There are continuing fears for the health of the high street:

Can anyone save the High Street?

Revitalising the UK’s high streets will be the centre of attention this week as Mary Portas updates her rescue plan. By James Hall .

Mary Portas told The Sunday Telegraph she is pleased with the work she has done since warning that our high streets are “in crisis”.

9 Comments
When Mary Portas faces MPs on the communities and local government select committee on Monday afternoon, she will be her usual confident self.
It is 21 months since the self-styled Queen of Shops outlined her blueprint for the future of the high street, and she believes that solid progress is being made in regenerating some of Britain’s failing town centres.
But while the TV personality is likely to take a grilling by MPs in her stride, a more provocative challenge will present itself two days later. On Wednesday, Bill Grimsey, the former Wickes and Iceland chief executive, will unveil a rival vision.
His report will claim that Portas’s December 2011 review “promised the Earth but delivered little”. The former retailer claims Portas’s government-commissioned work was “little more than a PR stunt” for a tie-in television show.
The tussle will once again shine the spotlight on the UK’s high streets. If any more ballast were needed, a three-part BBC Two series – Robert Peston Goes Shopping – begins tomorrow night.
In one episode, Sir Stuart Rose, the former Marks & Spencer boss and the current Ocado chairman, gives a bleak prognosis of what should happen to Britain’s thousands of empty shops: “I say don’t try to resuscitate the dead. Concentrate on the living and make the living better.”
So amid all this gloom, whose vision for the future of the high street is right?

Can anyone save the High Street? - Telegraph


The British high street: why it's time for the chains to put something back

It will take resources and leadership, but we simply can't turn our backs on high streets, says author of Grimsey review
Posted by Bill Grimsey Tuesday 3 September 2013 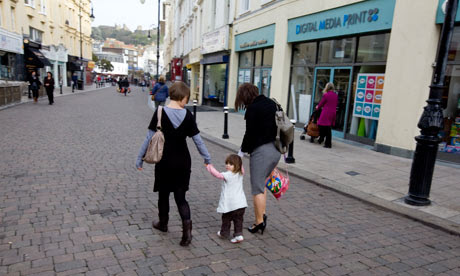 Bil Grimsey says big business can give high streets a chance not just to survive but to succeed.
Photograph: Martin Argles for the Guardian
There is a school of thought that's starting to harden into a weary consensus. It goes like this: the high street is doomed. There's nothing we can do about it. We need to stop wasting time on rundown towns full of high streets with boarded-up shops and focus on places where the tills are still ringing and profits are there to be had.
"Don't try to resuscitate the dead," says the Ocado chairman, Sir Stuart Rose, in the BBC series, Robert Peston Goes Shopping. "Concentrate on the living and make the living better."
From a business perspective, I understand this thinking. There are many towns in Britain where crippling overheads make it very hard to make a living. Weak consumer confidence makes the job even harder. But from a social perspective this kind of thinking is disastrous. It creates desolate high streets and alienated communities. It breeds anger and a sense of hopelessness that ends up costing the taxpayer a great deal in the long run.
I've come to the conclusion that we simply can't turn our backs on high streets. Transforming the most challenging high streets into vibrant places where people feel a sense of belonging and community won't be easy. Mary Portas discovered that. But if we simply shrug and accept failure then we're storing up much bigger problems.
The answer, of course, is not to try and rekindle the glories of yesteryear and focus just on shops. High streets will have to be redesigned around community needs. Education, housing, leisure, training, arts and health will all have a big role to play. But making this transformation won't be easy and it'll require a much bigger impetus than the snail pace of ministers who have spectacularly failed to get to grips with the problem.
It will also require significant resources, serious muscle and leadership. That's why I believe the time has come for the major high street players – who've all benefited hugely from a 25-year consumer boom – to put something back into the high streets they're leaving behind to move their stores to an out of town mega-mall culture that's only going to become more dominant.
As someone who's run major retail organisations and spent 45 years in the industry I know how well the big chains have benefited. Their shareholders have enjoyed extremely good returns and continue to do so. Last year Tesco earned £1.4bn of profits, Next £508m and Sainsbury £614m, for example. If a tiny portion of their turnover – we're calling for 0.25% of sales – was invested through a one-off levy in a local economic development fund this could sponsor a wave of social enterprises and new ventures to help dramatically transform the high street.
We estimate this levy would raise around £550m. It would achieve a lot more than the £18m spent on Portas Pilots and leave a lasting and powerful legacy.
Of course, getting businesses to entertain this idea – and they will naturally be resistant – will require a lot of work. They'll want clear assurances that the fund would be wisely spent. It would have to be administered by trustees that include some of the biggest contributors.
There's no denying though that this is achievable. The biggest businesses can and should take it upon themselves to do what government has failed to do: give our high street, a great British institution admired the world over, a fighting chance of not just surviving but building a new model at the heart of communities that will last.
• Bill Grimsey, the former boss of now defunct DIY chain Focus and Big Food Group, the former owner of the Iceland food retailer, launches the Grimsey review, an assessment of the problems for the high street, on Wednesday
The British high street: why it's time for the chains to put something back | Bill Grimsey | Business | theguardian.com
Large retail chains urged to pay levy to help revive high streets | Business | The Guardian
.
.
.

Posted by Jeremy Woodward at 07:30